I think it's safe to say that we had a busy weekend. From the start of Friday night to the end of Sunday night we were on the go.

Let's go ahead and get started shall we?

Friday night we went out with friends. We started with dinner. Where we not only met up with friends, but we also ran into everyone else. It seems that Red Robin on a Friday night is the place to be. First one of my sister's friends from high school then when she left my Mom and sister took her booth. It was fun.

With the exception of our service. My God! There were about ten of us and I'm not even kidding when I say that even though we all ordered at the same time half of our table got their food about twenty minutes before the other half! I typically try really hard to be understanding of the servers when I go out to dinner but I thought it was incredibly obnoxious. Of course add on that drinks went unfilled. It took like fifteen minutes for me and Brad to even get our drinks. And the check took even longer! I feel like I should also add that my Mom and sister arrived about half way through our dinner and they got their food at the same time as we, the second half of our table, did! I was very unhappy with that!

Fortunately the night got much better! We went bowling and let me tell you I haven't bowled in a very very long time! Add in the margaritas that I was drinking, and I was pretty freaking amazing. I threw the ball backwards not just once but twice. And learned that I bowl much better if I turned around and just threw it between my legs. I was practically a professional. I feel bad that I was showing our friends up so much. Ha!

Saturday we celebrated Easter with my in-laws. My mother-in-law had us all over and my sister-in-law flew in from Seattle. Plus Brad's Aunt and Uncle and cousins showed up too. As well as family friend Melissa and her little girl.

Preston was beyond excited to be at Gigi's house, which he calls Jen's house. He was also thrilled that everyone was there. And excited to have a playmate in Melissa's daughter, Ava.

The fun of the afternoon was the inside toy hunt! Gigi and Dave had hidden eggs toys throughout the house for Preston to hunt. He was all over the place so it took a little bit to get him into the hunt but I think he got more excited as he found certain toys. And Ava was a very willing helper.

Preston did refuse to eat most of the afternoon. And when he did eat he only wanted toast. And he ate it with a fork. I think when he finally fell asleep I was the most relieved!

Sunday was another busy day. We got started by showing Preston the basket the Easter Bunny had brought him. I had him sit on the bed and close his eyes and walked in with it and yelled SURPRISE! He was so excited. He kept repeating, "Easter Bunny brought this for me?!!". Maybe he's rethinking his relationship with the bunny.

Preston was incredibly cranky but I kept assuming that he was just that, cranky, so we continued on with our day as planned. Off to spend Easter at my Aunt and Uncle's house with the rest of my family. Where we did some playing, some snacking, an Easter egg hunt, some eating, and some peep roasting.

Preston loved the egg hunt. It is so weird for me to see how small the hunt has gotten kid wise as we all grow up. And fun to watch from the parent perspective. Preston started out unsure and then got very excited as he understood what he was supposed to be doing. About half way through he set his basket down and told me that it was my turn to find the eggs. Which translated out to his basket was too heavy and he needed me to carry it. I must say too I was impressed with my littler cousins. They understood that since Preston was littler he had first dibs on the eggs that were just thrown all over the grass as opposed to the ones that were hidden. My cousin, Trey who is only six ran past several eggs and when asked why he informed us that those ones were easier to find so they were for Preston. And he's only six! It was much appreciated on our end as Preston's basket was as full as everyone else's. 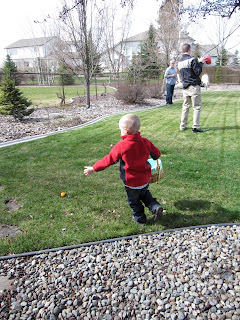 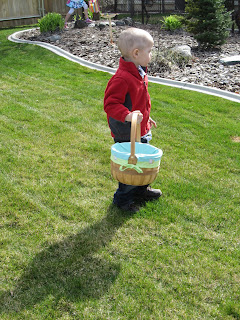 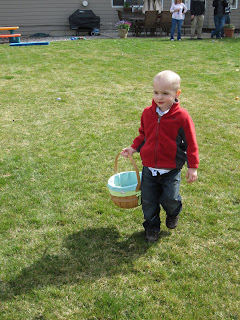 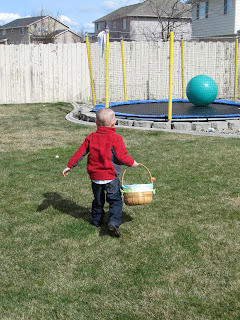 The day wore on and Preston got crankier and crankier. I kept thinking he was just cranky. Probably because I was in denial. But also because he was happy at moments too. Racing around the yard. Or wanting to swing. Or jumping on the trampoline.
When we headed home Preston was out in the car. And this was the third day that he had taken a nap. Naps aren't common around here. I should have known something was up when he started napping. I guess I was just so excited that he was napping that I didn't think anything about it.
Well when he woke up from that nap he was running a major fever. Resulting in a call to the after hours nurse, a trip to Walgreens, and some serious Mommy guilt.
His fever broke early this morning and he obviously feels better today. As evidenced by the fact that he is eating. And racing around. And there was no nap.
Even with the cranky start of getting sick, we still had a wonderful Easter! I hope you all did too!
Spoiled little Preston also finished off Easter pretty good considering how he felt. At Gigi's house he left with a bucket full of candy and all toys that Gigi had gotten him. Along with a box of See's Candy from Aunt Jen. From my parents he recieved another bucket full of candy along with more than too many toys. Not to be forgotten my parents also got me and Brad some candy and a gift card to Olive Garden...yum!

*I'm sure you can tell that I was horrible about picking up my camera this weekend! Call it enjoying family. Call it forgetful. Call it a cranky two year old!
Posted by Kim at 10:26 PM

thank goodness preston's fever broke the next day. at least, he was able to spend easter.

we spent easter by going to doctor after mass. i was a bit worried about the osterized poo. then, we had hime given the shots. see? your easter was still a bit more like it's supposed to be.

thanks for stopping by my blog :)

awww preston is so cute looks like he enjoyed himself! we also had a busy weekend looks like the week is about to be the same