Do you see this little boy? 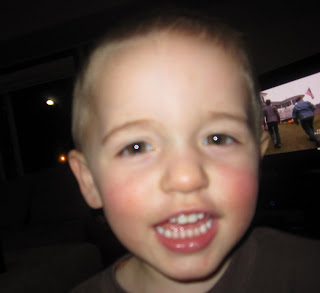 You remember him right? He's on the blog fairly frequently! Ha! 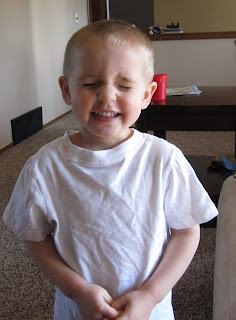 You will never guess what he has done now. And he didn't just do it once. Oh no. He's done it twice.

HE POOPED IN THE POTTY!!!

Both last night and tonight. All by himself. We didn't even find out he'd done it until he called us into the bathroom to see.

Last night he ran out of the bathroom and yelled "poo-poo" to Brad. Confused Brad attempted to convince him to go poo-poo in the potty and they headed back to the bathroom. Only to discover that Preston didn't mean he had to go poo-poo, he meant he had already gone poo-poo! We praised. We gave treats. Both a handful of gummy bears and a sucker. There may have been some dancing involved. What can I say we were absolutely thrilled. Not just that he'd done it. But that he'd chosen to do it on his own.

Tonight it was the same thing. Preston was roaming the house with no bottoms on and using the potty like a pro. We seem to do pretty good around here potty wise as long as Preston's bottom half is free.

I can't even explain how exciting it is to me that Preston pooped in the potty two days in a row. I was so excited I almost took a picture to share with you, so you all could be as excited as I am. Then I came to my senses and figured that posting a photo of Preston's poop on the blog might be a little much.

Instead I guess you'll just have to trust me on this one, PRESTON POOPED IN THE POTTY!!

how funny, I mentioned this too! What is is about pooping on the potty? My little guy seems to think that it is supposed to be an on-demand thing. He keeps telling me he doesn't know how to do it, because he thinks he should just be able to whenever he ways "hey body, poop"

Exciting for you and thank you for NOT putting a picture up of his poop!

Haha, yeah I think we're okay without a picture:) But soooooo exciting!!! Oh and with the pond in my back yard...we do get this every year, but it's normally only a few feet deep and comes no where near the house. This was the worst it's ever been!

It is awesome that poop can be so exciting!!!