A Visit To The Dentist

A certain little boy paid a way over due visit to the dentist recently.
Where much to my shock he allowed them to...
Clean his teeth. 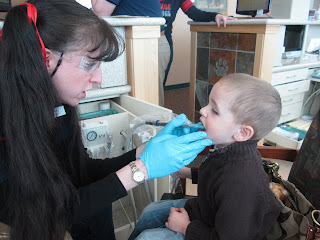 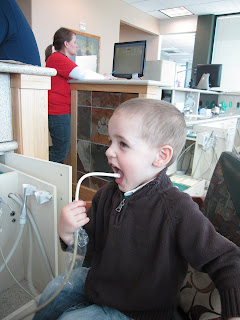 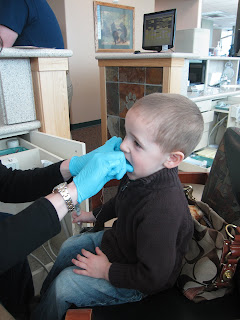 Count and test the strength of his teeth. 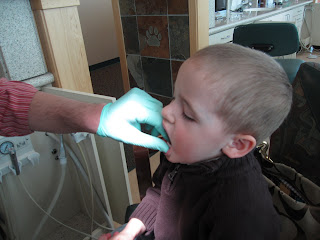 And apply some fluoride. 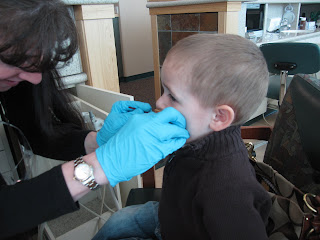 I'm not even kidding people. I was absolutely flabbergasted. I was meeting my sister after and no joke told her that it wouldn't be long because there was no way Preston was going to let a complete stranger get all up in his mouth. Especially long enough to mess around with this teeth. I was wrong. And we were late to meet my sister. It was a good late though!
Preston was a little weary of the dentist chair though. He refused to sit in it. After attempting a couple of bribes I gave up. He was willing to sit in the chair that I was supposed to sit in. So making the best of the situation I moved that chair over to the hygienist and let her go to work. Other than that Preston was a pro. He did get a little nervous when the dentist came over and put the tool to test the strength of his teeth in. I saw him tense up and held his hand and he sat there like a big boy until the dentist was done. I'm so proud! 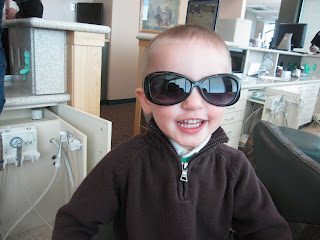 The dentist said that thinks look great. I did point out that one of Preston's molars looked slightly discolored on top so the dentist said we're going to watch it. It looks like it could be a cavity in the making. But he also said that the grooves in those back teeth make that easy to happen. Which was music to my ears because the one thing I hate about the dentist is the guilt trip they sometimes give you. Yes Preston drinks juice. Yes I allow him to have candy. Yes we have a drawer full of fruit snacks. But for the first time ever I left feeling like all of that was okay. In moderation of course. 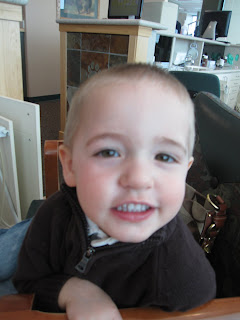 Although that moderation really hasn't been happening around these parts lately. Preston's caught my cold. The one that lasted like two freaking weeks. Not cool. The very same cold that stole my voice for over a week! So nights have been, to put it honestly, a bitch. Preston's waking up several times a night. And by several I mean he's waking up more than I want to and when he wakes up I have to too. And he wakes up crying for juice. And then the coughing starts. And then the whining. And you know what? You have to swear you won't tell a soul. I've just been rolling out of bed and getting him a freaking glass of juice. I'm trying to convince myself that his orange juice has vitamins and whatnot and those things will help him feel better. As will the sleep that he goes right back to after he gets his juice. I know. I'm horrible. And the recovery from the last couple of nights of this is going to be a real peach.
But at least we have a dentist who won't shoot me if I admitted this. Not that I plan on telling the dentist about the late night juice visits. I'm not that crazy!

Was this his first trip to the dentist? That's great that he did so well!! And I would get up and give him juice too....sometimes you just need to survive!

Kuddos mom!! I couldn't get my youngst to sit in the chair because it wasn't a princess chair and she wouldn't sit in anything but a princess chair. I have no idea where that came from, just went with it and had her dad bring her! I let him deal with it! LOL!!

i'm so envious of you and your little trooper. one day, i hope to drag my little guy to the dentist's chair and pray he stays there long enough. right now, he wont even enter the door to the dentist's office...

shuttling in from SITS :)

your son is so adorable!