Trip To The Farm

We spent Saturday of what I guess is now last weekend visiting Brad's grandparents out at the farm.

Ummm off topic, but how is it already Wednesday night? I had a whole list of things I was going to do today and then I made the mistake of watching an episode of Vampire Diaries. It was sooo good that I am now six episodes done and my bathroom still needs to be cleaned.

Anyways back to Saturday. We made the drive out there Saturday morning and planned to meet up with Brad's sisters and then get lunch before heading out to the farm. We made the mistake of telling Preston where we were going before we left. In fact I hyped up the farm for days. Big mistake. Preston must have asked if we were almost at the farm a million time during the two hour drive. Heaven help me.

Brad's little sister basically lives on a farm too. She has chickens, cows, and two horses(is that even right? It sounds so weird to me...horses?). Preston loved it. What two year old little boy doesn't love being able to run around with no fences or real end in sight?

We stayed at Caelan's much longer than we'd planned and really only left when we did because Brad started insisting that he was starving to death. 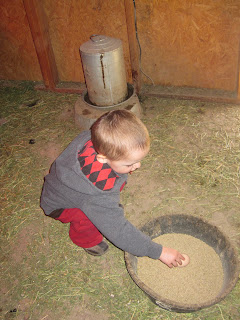 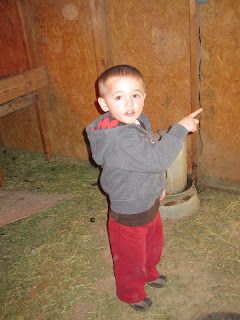 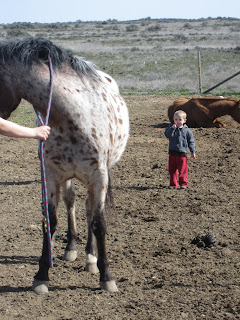 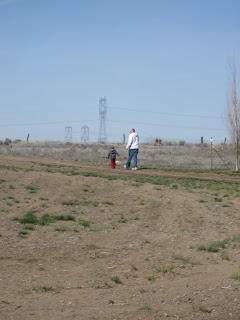 Off to lunch. One of my very favorite things about visits to Brad's hometown is the restaurant we always eat at. Only it's really not exactly a restaurant. It's inside a gas station connected to a fishing shop and an ice cream parlor. What can I say Brad grew up in a small town. But oh the nachos. Don't even get me started on the nachos. They are almost good enough to convince me to jump in the car and drive the four hour round trip right now just to have them.
From there we all piled back into the car and ventured even farther into the middle of nowhere to the farm. Preston was starting to get tired along the way until we pulled up. Then he was wide awake.
Brad's grandparents raise cows, pheasants, turkeys, and chickens. And peacocks roam their property. Basically all things that we don't see when we walk outside our house Preston was surrounded by. And he wanted to see all of it.
We went inside to say hello. But before long Preston was insisting that he needed to get back outside. We stayed for several hours and Preston and Brad rotated between exploring the house and exploring outside. I'm even told that Preston got to hold baby pheasants. I wish that I had known they had baby pheasants and been told that Preston was going to see them and be allowed to touch them! But I didn't even hear about it until the next day when Brad mentioned it. So no pictures. Looks like we'll have to make another trip for those photos. And next time I should probably just bring Preston's entire closet. In just one day Preston changed his clothing at least four times! I guess getting dirty is what you do on a farm. 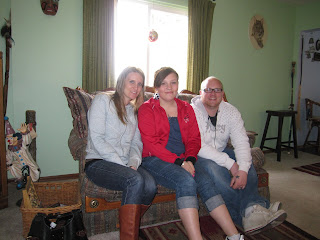 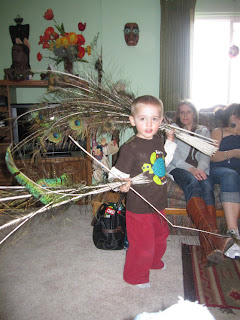 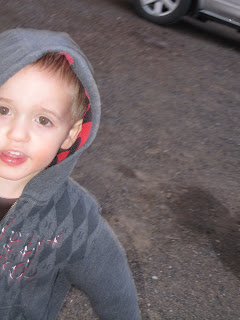 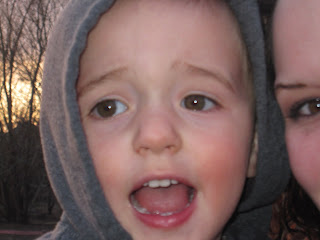 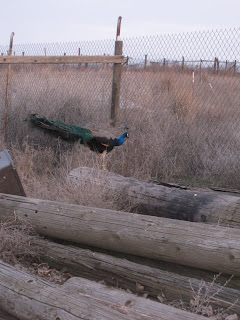 We arrived back in town pretty late and stopped to feed Preston at Caelan's before making the drive home. Preston was so worn out and exhausted. His cranky level was sky high. At one point before we left he insisted that I grab him his blankie and only I could grab it for him. When Jen handed it to me, he threw it back and told me to get it for him. What a sweetheart. It was no big surprise when he fell asleep within two minutes of us hitting the road.
It really was a nice way to spend a Saturday. And a nice change of pace. We don't get out there nearly often enough. Which is just pathetic because it's only two hours away and Brad's little sister lives there as well as his grandparents. And both of them are growing old way too fast. I can't believe how much older Caelan seemed this time versus the last time we saw her, plus she's fourteen these days which really makes her seem older. And the same goes for Brad's grandparents. They seemed that much older this time than they were even just a year ago. We are planning on going back Memorial Weekend, so at least it won't be another year before we visit everyone!