One Little Monkey Hanging On The Bars

For a little while today it was nice outside. Nice enough outside that when Preston bolted out the door in just his t-shirt, I let him and went back to unloading the dishwasher.

Until he yelled for me. And I looked out the kitchen window to see him hanging. Hanging from the monkey bars on his swing set.

I panicked and raced out to catch him before he fell off. Only to be told, "Mama, let go of me!". Apparently he could do this on his own don'tchya know.

So I stepped back and took pictures instead. 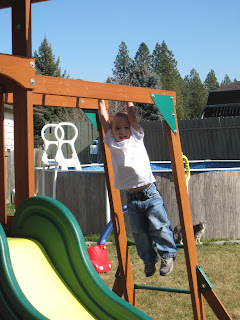 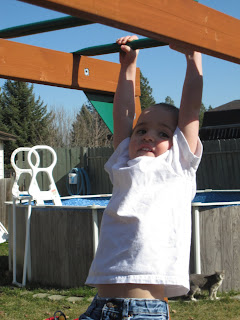 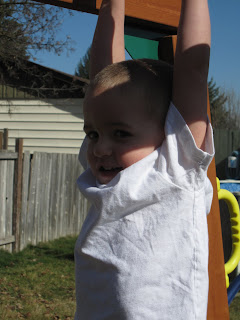 I'm not going to lie, I was a little amazed that he could hold himself up there for that long over and over again.
Did I not mention that? He didn't just do it the once. Or even twice. He did it again and again. And again some more.
He even perfected his landing. That's right, his landing. He can't make it across the monkey bars just yet. He can crawl up the ladder and grab that first bar and then hang until he lets go and drops to the ground. He braces himself for that moment when he hits the ground. You can see it in his face and when he hits the ground even though he's dropping about six feet (those monkey bars are taller than me!) he still lands safely on his feet.
At least he did until he didn't land so great. He must have gotten cocky because I was reloading the dishwasher when he started screaming and I rushed out to him laying under the monkey bars covered in pieces of grass.
He climbed up one more time and yelled for me to catch him. One bad fall and he was afraid to try again.
I'm not sure If I should attempt to encourage to get back on the horse, figuratively speaking of course. Or just be relieved that it's one less thing that I have to worry about him doing.

They sure know how to stop our hearts, don't they?! Little stinkers! I am going to have a heck of a spring, with a preschool and a toddler that prefer to be dangerous it opposite areas of the playground.