My parents stopped by on Saturday. To drop off some candy from See's Candy. Ummm yes please. Somehow not only did they drop off chocolate but they also left with Preston.
It was absolutely beautiful around these parts on Saturday, all weekend really, and Preston was playing outside when they showed up. He was more interested in taking Grandpa out back to play than he was in the chocolate. But an hour later when they attempted to leave Preston would not have it. He attempted to drag Grandpa back outside, begging "Gampa! Outside! Play with you!".
Hoping to compromise I told Preston we could walk them out to the truck. At first Preston was content to play in the front while I said my good-byes but when he realized they were leaving he insisted they stay. My Mom informed Preston they couldn't because they had to go get Bennie some more food. Then Preston told them he was going to go too and headed for the back door to climb in. He did say that I was going to come along as well but apparently he quickly forgot about me.
Preston climbed in, closed the door, and then he LOCKED it! Locking me out! He didn't forget all about me though. He did roll the window down to tell me that he was going bye-bye to get Bennie some food.
My Mom suggested that that actually take him and I was left to grab his stuff and install his car seat in my Dad's truck. Ummm what!?
I took my time. I figured with the way that Preston was been attached to me lately there was no way he was going to leave without me.
I thought wrong. He did!
He waited while I installed his car seat. He waited while I ran inside and grabbed him diapers and a light jacket. He waited while I ran back inside and grabbed him snacks, toys, and a kitty cat. He waited while going to the pet store turned into going downtown to see the waterfalls and walk around. He then waited while I grabbed his stroller. He just waited while I got him ready to go. Never once changing his mind.
He even waved good-bye to me out his window as they drove away. What happened to my child? The one who a week before ran screaming from the front door when I attempted to run to the bank and back by myself? He must have known how much fun he was going to have with Grandpa and Grandma.
And fun he had.
Downtown they explored the park. Visited the falls. Where I was told that Preston insisted they cross over the different bridges down there more than once. A trip to the playground was in order as well as feeding the ducks. Preston had a blast with Gampa and Nee Maw. 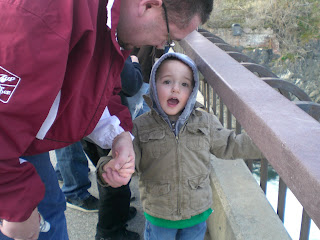 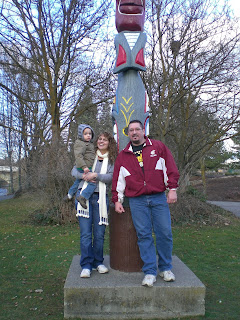 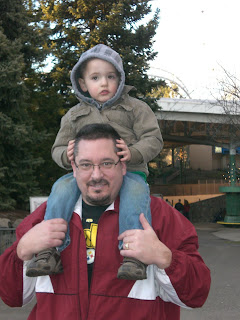 What did Brad and I do with our spare time? Brad changed out the faucet in our bathroom, while I finished cleaning up some of the house. What can I say we're pretty awesome like that. I think Preston got the lucky end of the deal Saturday afternoon.

You know what really sucks is when you drop them off for tiny tots preschool thinking they will cry when you leave...but no they don't.