Preston was playing quietly downstairs. As any parent knows this is a sign of a problem. I know. It really doesn't sound like it would be. What's wrong with quiet play? Let me show you what I found Preston doing during quiet play. 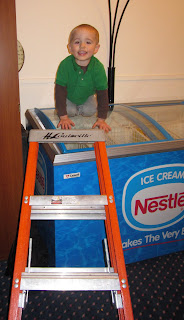 He was playing in Daddy's office when he apparently decided that he needed to play on the freezer. Only problem was how to get up there. Oh wait, Daddy had left a ladder in there. A little rearranging and Preston climbed right up.

While up there Preston decided to do a little yoga. Nothing like a little bit of downward facing dog using a freezer as a yoga mat. 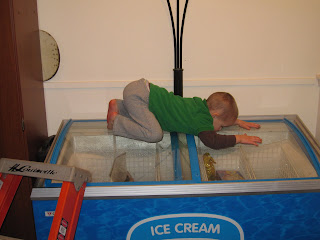 Of course I asked him to please climb back down. More curious as to whether or not he actually could. Climbing up is one thing, you can see where your going. Climbing down you have to know what your doing and I not only wasn't sure if he was capable of doing that but I wasn't sure that he was brave enough. Rest assured Preston is perfectly capable of climbing back down the ladder. He is also brave enough. And willing to show off his skills. 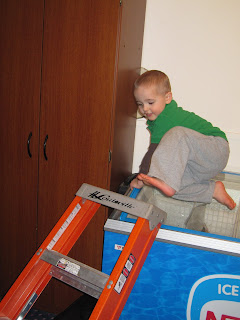 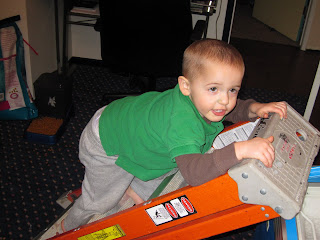 A few days later he was right back where he'd started even though I'd moved the ladder all the way across the room. I have no idea how he got it back over to the freezer all by himself. I walked into the room at the same time as Preston started flipping switches in the fuse box. Looks like he wanted to get Daddy's attention upstairs too. Guess what? It worked.

Looks like we're going to have to keep a closer eye on Preston, the ladder, and the freezer. I'm a little, okay a lot, afraid to see what he's going to get into next.

I just love your ice cream freezer! I know why you have with the family business and all, it's just really funny to me.

Ok, I have to admit, I'm impressed! He moved the ladder, go to see what he wanted to see and then able to climb back down. Wow. Scary, I can imagine for you, but cool that he could do this!