We went ahead and celebrated Valentine's Day early this weekend. Do you have any idea how hard it would have been to find a sitter for Preston on Valentine's Day? Not something that I was looking forward too! But Friday, Friday was a much easier day to find a sitter. Plus no extra crowds and Mommy really needed a night out!

My favorite restaurant, a margarita, and a movie were just what I needed! Ahhh...bliss! And umm a night out with my husband and just my husband, I don't even remember the last time that happened! We then went and saw Valentine's Day. It was sooo good! I couldn't stop laughing! I cannot wait until it comes out to buy! Or maybe I'll just go see it again, anyone up for a movie?

Of course the only photo that I have from that night is of me and Preston. Clearly I need to work on that whole taking pictures of someone other than Preston. 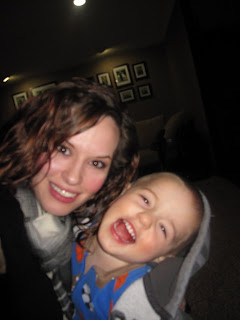 I got lucky and slept in on Saturday. And continued my quiet morning when shortly after I woke up Brad and Preston decided to head to the park to enjoy the sunshine. Preston has been desperate to get outside and Saturday was perfect weather for outside play. Of course since Daddy took him there are no pictures of any of it.

We then spent the rest of Saturday at my MIL's house and my parent's house. Where Preston not only bossed everyone around because that is what he's doing these days, but also worked his charm. Bossing people around and charming them seem to go well together for him.

At Tammy's house this involved dragging Dave outside with him. Preston clearly didn't enjoy enough of the sunshine at the park with Daddy. And then having Tammy play downstairs with him. Of course the stairs are a favorite for Preston at Gigi's house. Him and Gigi played catch with the banister and a bouncy ball. And somehow Preston decided to show us what it looks like when he falls down the stairs? Don't worry, no two year olds were hurt in the taking of the stair photo. 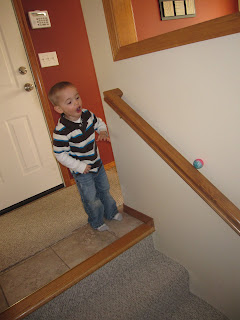 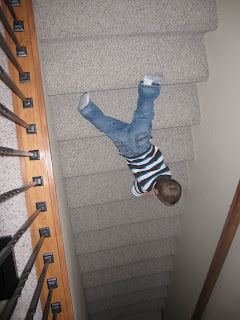 At my parent's house, Preston was overjoyed to receive his Valentine's Day gift that Grandpa picked out special just for him. A new toy car that drives itself and plays music with the push of a button. Preston also very clearly missed Bennie. It had been days since Preston had seen Bennie and clearly that is just too long in Preston's eyes. 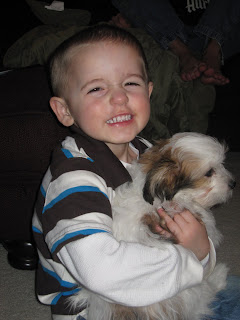 We had a quiet Valentine's Day at home on Sunday. We didn't do anything at all. Literally. Towards the end of the day I finished up some work. But other than that it was just a typical quiet Sunday. Preston had already received his Valentine's Day gifts from us in the form of a play lizard and a Cars toolbox earlier in the week at his insistence and Brad and I had decided to forgo gifts to each other in lieu of a night out together, so we didn't exchange any gifts at all on Valentine's Day.

What a great idea to celebrate it early! And I'm so glad you enjoyed Valentine's Day...I really want to see that! If only we lived closer we could go together!! haha

Celebrating early is an awesome idea! I know a few people who went and saw that movie as well, I can't wait to see it.