It was warm out today. Well warmer. Warm enough out that Preston insisted that we absolutely had to go outside right this second please now!
Of course I obliged.
You would think that would make him happy. And it did. Sort of. Then he started in on the whining. For some reason he wasn't happy that we were outside. That just wasn't enough for Preston. No. He needed me to pull out all of his outside toys. All the summer stuff for some reason needed to be available to play with. Never mind that they were soaked from the rain we've been having lately, Preston wanted them out and he wanted them out now. Then having them out wasn't even enough he wanted to move them around. Over here, over there. On the upper deck not the lower deck. In the grass. It was practically musical toys.
I was getting a little frazzled. For some reason I'd assumed that just being outside was going to be enough for him. No way no how. I was threatening to drag him inside when my Mom called. Apparently she heard the desperation in my voice because she offered to come over and bring us lunch. YES PLEASE! It was one of those moments where I really love that I live five minutes from my parents.
With renewed energy and patience I tossed Preston in his swing. He loves the swing. So we did some swinging. Well he did some swinging and I did some pushing. 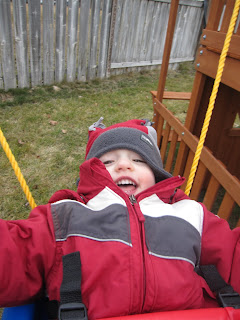 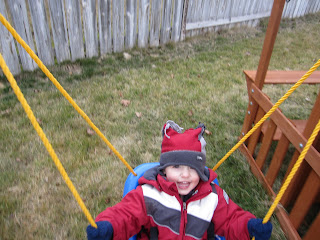 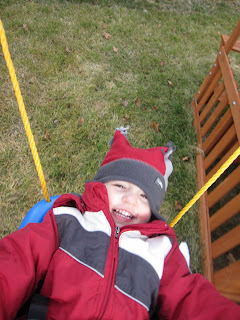 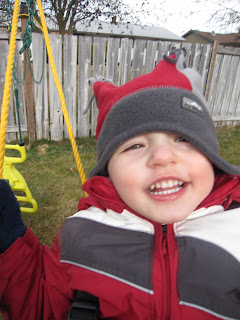 Not long after that my Mom arrived with lunch! Preston was excited to see NeeMaw and I was excited that I didn't have to make lunch! And hello adult company.
Even though Preston was excited to see NeeMaw and he's a big fan of french fries he was not ready to come inside. So he'd eat and run. In and out he went. And heaven help me if I tried to close the back door when he came inside. Meltdown! We really aired out the house today.
After Brad arrived home I snuck out. To party. Ha! Not so much. I snuck out to grocery shop and visit Target. Oh yes, it is a fabulously exotic life that I live. But to be clear, I was ecstatic about being able to go grocery shopping all by myself. Do you have any idea how difficult it is to entertain a two year old while at the same time trying to make sure you get everything on your list? Of course in my excitement to shop alone I left my list in the car and didn't realize it until I was halfway through the store. Fortunately I hit up Winco first and then Fred Meyer so I could just pick up the forgotten items at the next store. I know it sounds weird but I love everything about Winco and their prices except their produce department and I love Fred Meyer's produce plus they're close to home so it's really not a big deal to make a second stop. Especially when I'm on my own.
I arrived home in a great mood as not only did I get to run to a couple of stores all alone, but I also had a wonderful checker at Fred Meyer. You know the kind that actually seems to enjoy what they're doing and make conversation with you so it's not awkward while you wait for them to ring up your purchases. She made me feel even better because once she found out that I was enjoying shopping alone she completely understood and told me to take the long way home and enjoy MY alone time!
It is amazing how a couple of hours to recharge make the rest of the day run that much smoother. Even if those couple of hours are spent at two grocery stores and Target!

Glad you ended up having a great day...and there is nothing more relaxing than food shopping by yourself...ahh the life of a mom, haha