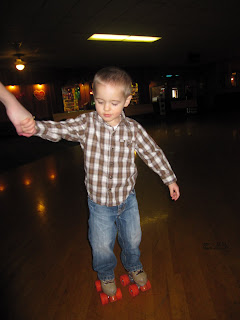 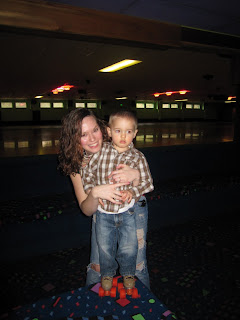 Preston did pretty good too. Granted he only spent the first half hour or so that we were there actually in his roller skates. He spent the next hour running around in his socks all over the skating rink. It's a good thing that it was toddler skate so there really weren't many people there and for the most part all the skaters were kids too. 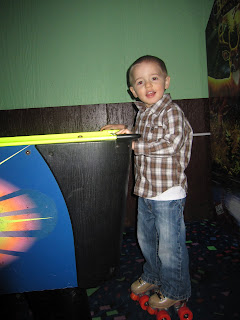 There was some falling. But he handled it like a pro and got right back up. 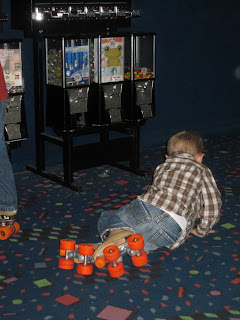 Luckily for Preston his buddy Zack was there so he had some help. How cute are these two? Zack walked up and grabbed Preston's hand to help him out since Zack had already taken his skates off. 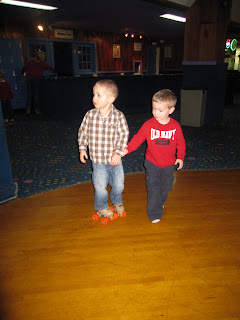 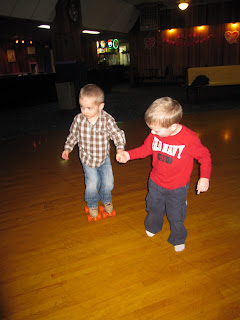 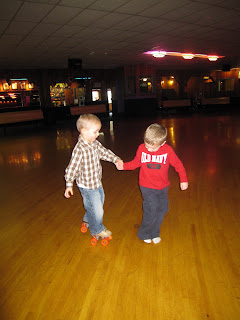 The handholding was short lived though as Preston preferred to skate on his own. "No hold the hand Mama!". "March over there Mama." Preston decided early on that he would rather have me be the destination that he was heading to instead of having me head there with him. 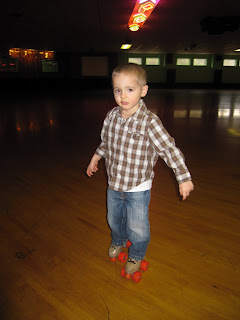 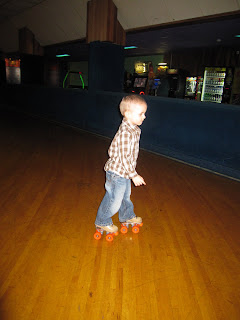 After the skates came off the racing around began! Preston wanted to get all of that extra energy out. I was all for it. Around and around they all went. But they didn't just race around they were also a pack of dogs. Preston's been going through this phase where he acts like a dog, and his friends seemed more than game to play along. 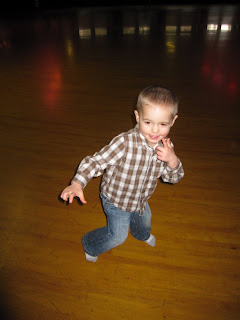 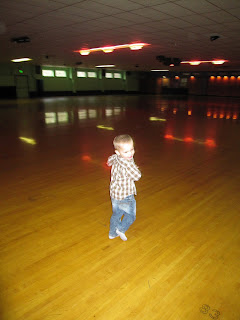 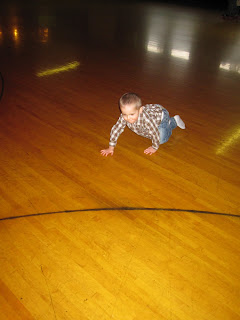 Also just because I think it's hilaroious and I'm more than a little impressed. Whlie we were playing Preston asked to be lifted over the half wall that went around part of the rink. Only Preston called it the "Wall of China". I'm thinking he learned that from an episode of Little Einsteins. Go Little Einsteins! And *happy dance* my two year old has some concept of what the Great Wall of China is!!

Cute post Kim. Your pictures turned out better than mine of Zack and Preston, I'm stealing a few.

So adorable! Some of my favorite memories as a kid were at the roller skating rink...hope he slept well last night after all the excitement!

Really? Are you trying to make me swoon and give me baby fever again? Those pics were all kinds of cute! I love when boys are small enough to still be okay holding hands with each other. It always makes me melt.

I am going to show this post to my husband who refuses to go skating with me because he says he cannot learn how to do it. Hopefully he'll be inspired to see that a toddler can do it.

that looks like so much fun! i wish we had a skating rink here! love the photos of preston and your nephew and loved reading a few more posts too. thanks for stopping by on my sits day!