How Could I Forget?

Somehow in Preston's latest update I forgot to mention a couple of things. I blame it on the lack of sleep these days.

Preston is learning his numbers. He loves the attention that he gets when he correctly identifies his numbers all on his own. He's quite the little attention whore.

While at Chuck E Cheese he showed me that he is recognizing the numbers when he sees them. Sometimes it seems hit or miss when we're trying to teach him something. He won't seem like he's paying attention and then all of a sudden we'll be somewhere and he'll show us just how much he's retaining.

He was reading the numbers off on the little order tabs that you set out at the end of your table. In that moment I realized that Preston knows his numbers one, three, and five by sight and can correctly label what they are.
Since Chuck E Cheese he has shown me that he not only knows those three number, but that he can correctly identify numbers 1-9. Now it's just a matter of teaching him what the number are when paired with another number! 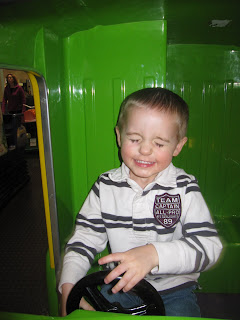 Since the arrival of my nephew, Mason, Preston has become a little bit more clingy. He will be playing just fine when all of a sudden he'll come over to me and say, "Mommy, hold you. Hold Preston". He just wants some cuddles. It's pretty cute. He refers to himself as you instead of me, so when he says hold you he means that he'd like me to hold him. I love it.
Of course this could also have to do with more than just the arrival of his cousin. It may have something to do with me going back to work Mondays and Tuesdays and him staying with my Mom those days.

Preston has been picking up the word love. Every once in a while he'll tell me he loves me, but most of the time he's just repeating it after I say it. However he's also shown me that I must use the word love a lot. While at Kohls, Preston picked up a watch and told me, "Mama, Preston loves this one". It was hilarious! He then picked up another one and told my Mom and me, "Mama loves this one". Or at Target, he'll find something that he just "loves". I love that he loves things! 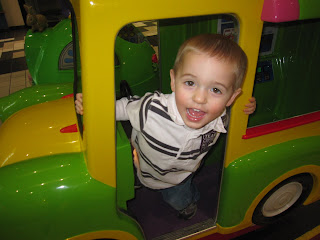 We've been working on emotions lately. For example when Preston is naughty I tell him he has made me sad or mad. If I tell him that he's made me sad than he will ask me to cry. In theory this sounds adorable. But when I'm telling him that he has made me sad because he hit me, it's not so cute when he smiles and tells me to cry.
He also knows happy. He's had a fairly good grasp on that one for a long while now. Complete with his happy face. Remember that one? We've also added in scared. Which usually goes along with him growling at one of us and then laughing when we get scared.

He seems to be understanding what emotions are, what the different ones look like, and what causes them. When he is naughty he will tell me that he knows that I am mad or sad. Although sometimes it seems that he thinks it's more of a game, so we're going to be working on that one.

Preston has learned the words naughty and trouble. He also knows that when you are naughty you get into trouble. What can I say he's two and a half, we're well into the naughty and trouble phase. He will also tell me when our cats are being naughty. Or yell out that "Monti in trouble!".
Lately he's even been putting his stuffed kitty cats in timeout. For "biting" me. He'll announce that his kitty bit me and then tell it that it's in trouble and it needs a timeout. When it comes out he will have it tell me sorry too. 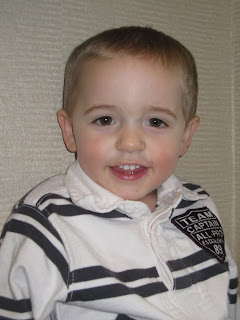 My Mom has taught Preston about cooties. That's right cooties. Preston is going through a phase where he's refusing to give anyone hugs or kisses. Every time we kiss him or ask for kisses he'll exclaim, "No kisses!". It's cute, but I hate it. I love kisses! Preston no longer refuses kisses now that cooties have been introduced. Now when he doesn't want to give kisses when we are leaving my parent's house, my Mom will tell him to give cooties and he'll race around and give everyone kisses until they yell no cooties! Win-win right?
---------------
Preston has recently started to pick up on sounds effects. This left all of us confused when Preston started walking around punching us (in a playing manner!) and saying "Beer". With each and every punch Preston would call out "Beer. Beer". Brad and I were completely mystified. Where on Earth did Preston learn the word beer? And even more so why the heck does he think it relates to punching?
Until we arrived at my parent's house one morning. Grandpa was home and Preston ran over to him to play. While they were play fighting my Dad made fists and Preston made fists and they got down to the manly stuff. I was watching and realized where Preston learned to say "beer" when he punches. Only it's not supposed to be "beer". It is however, "B-eeew". This is the sound effect that my Dad makes when he punches. Somehow Preston interprets that as "beer".
I cannot tell you how relieved I was. Much better that Preston doesn't do well with his sound effects than that he learned that beer and punching go together from us. 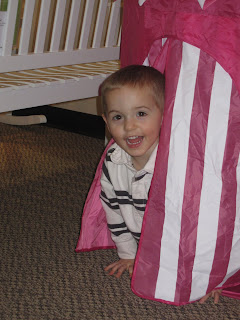 ---------------
Somehow Preston is learning things that I am not teaching him. The other day when we were driving home, Preston announced "bald eagle". I looked around wondering what he was talking about. When I saw it. On the back window of a car one lane over was a photo of a bald eagle. I was shocked and impressed. Especially since I didn't realize that he was understanding things that specifically. If I'd been the one to teach him that one I would have said bird, maybe eagle. Looks like I'm going to step up my game.
Or when we were at the mall and found the tent that he is photographed in. I kept calling it a tent while he played in it. But after we'd walked away he cried out that he wanted to go back to the circus! Where on Earth did he learn these things? There are many other examples that I simply cannot think of right now too. He's like a little sponge, sucking it all up!
----------------
BIG NEWS** Preston counted to fourteen! All by himself! We were playing Hungry Hungry Hippos and counting out our points after each round to see who won. Yes, I want to know who wins when I play with my two year old. Plus that gets him to count. And for the record, he won twice and we tied once. Apparently I suck at that game. Although it could be because I played with just the one hippo and Preston played the other three. Anyways...we were counting out Preston's points and he got to ten and I figured he would stop. But he didn't. He kept going! All the way to the end, which was fourteen. While I sat there flabbergasted! Shocked. I had no idea. Preston can count to fourteen!! 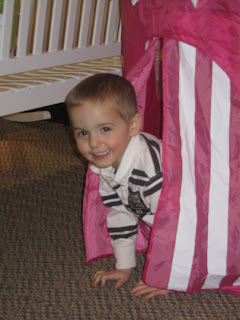 There you have it, what my busy little boy has been up too! Or at least the things that he's been up to that I am remembering to blog about!

he is learning so much!!! And I love that you called him an attention whore, haha...love it!

He is really cute. The cooties thing is pretty funny - he will probably say it in reference to girls from now until he is 13 and when that day comes you will be the first one to be like "hey buddy, what about those cooties?"

He is adorable. And the cooties..wow..that takes me back. I hope he grows out of it soon. LOL.

Great update, Kim! He is really growing and learning.