Are you looking for the recipe for the worst playdate ever? Well, it is a good thing you stopped by here. It just so happens that I have it. Shall we get started?

Start with a child at roughly two years of age. Give him a late nap the night before. By late I mean that he wakes up at 8:45pm. You know around the time that you would typically start bedtime. From there you will have to anticipate that he will be up late. However as you didn't nap, you will fall asleep at midnight with him sitting next to you in bed. Proceed to wake up at 2am, that's TWO'O'CLOCK in the morning for those of you who weren't paying attention, and find your two year old still up and playing on your cell phone. No biggie. Of course at this point you will take the phone away and insist that he go to sleep.
Plan on your already late sleeping child, sleeping pretty late. Decide to just let him. He needs his sleep and you can just hang out with friends.
Change of plans. Your two year old wakes up at 9am. After just seven hours of sleep. This is earlier than he wakes up most mornings when he goes to bed on time. You'll probably get a little bit of a bad feeling about the playdate at this point, but you will decide to go ahead anyways. What's the worst that could happen?
You really shouldn't have asked yourself that question. Let me go ahead and paint you a little picture of your playdate to come. There will be hitting. There will even be kicking. Toys will be thrown. Tantrums be happen. Sharing will not. Timeouts will be plentiful. Like half the playdate will be spent in timeouts. And this is just your child.
It will be horrible. Trust me, I know. Luckily for you, your friends will understand and act like it really wasn't as bad as it was. And it was BAD!
Later you will wonder how a child who looks this adorable and innocent... 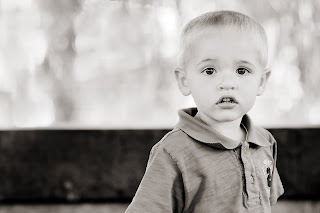 Could behave so horribly. Fortunately you will love him in spite of it. Most of the time.

We stayed in the house last week after an early morning outing and a melt down. I couldn't have the world deal with my little tornado.

It is so hard when they are off.
Stopping by from SITS!

At least you had an excuse to give the other mom "Sorry the way Preston is acting today, he was up all night long watching Letterman & talking on the phone"

Wow! Sorry but two is not easy!!

Sounds like trouble! I guess even the cutest, well behaved kids can have bad days. Sorry his bad day made your day bad as well!

Uggg. I am cringing because I have done the exact same thing and walked into the worst hours ever. Shaila can be a wreck during those things and usually tears about (mine, not hers) when she is not rested well enough.
Totally feel you girl.
Kiran

OOOOHHHHHH - been there done that, and remember that it DOES not feel good when it's happening.

Stopping by from SITS!

If it makes you feel any better, my 2-yr old twins act like that at playdates but they have no excuse. They get plenty of sleep. I just blame it on their age and smile at my friends and say, "Well, they're only 2 years old...what do you expect?"

Your son is adorable...I know, it makes you wonder how someone so adorable and sweet could be such a different person!!

Ouch! At least you got those two hours sleep from midnight until 2!

Sorry about the bad playdate, but let me just say that I'm jealous that your two year old sleeps past 9:00 on a regular basis. My girls never did that. They still don't.

He does look so adorable and innocent.
I, however, am the mom of a two year old boy as well so I can totally picture this haha. Definitely been in your shoes and I've wanted to melt into the ground and never get up. :)

Stopping by from SITS.

ouch! That is rough! It is great your friends understood!! I am actually dealing with this problem right NOW - a four year old crashed for a three hour nap and it is now 10:15pm and he is ready to go.

Oh,how vividly I remember those days! When they get their sleep messed up, there is no hope for salvage.

Oh, that does not sound like fun.
Droppin' in from SITS!

Once, when I fell asleep and woke up, my 10 month old was practically on top of my night stand getting my phone. I don't know how he didn't fall. Two nights in a row, bed by 9 for him, fingers crossed...

stopping by from SITS, despite the badday I think he is adorable

p.s. I have three giveaways going on right now!

Oh, man. Been there.