We're dealing with a little bit of a juice addiction around these parts. Preston's juice addiction to be exact. That boy would drink juice and only juice all day every day if we let him. For a while we were really going a little crazy on the juice but lately I have been putting my foot down and trying to cut back. In my defense, Preston doesn't like milk so he drinks orange juice to get his calcium. That's also just an excuse for his excessive juice intake. Not that we're judging here. Right? This is a safe place.

And it is a good thing we aren't judging, because I have a story for you.
Preston woke up the other night at 2:30 in the morning. And by wake-up I do mean that he was completely out of it, but his eyes were open. Before he even opened his eyes he mumbled the word juice, which woke me up. I was prepared and when he opened his eyes and asked for juice I handed him his sippy cup full of water. He took one sip and acted liked I'd tried to poison him.
"Juuuuuiiiiiiiice!"
Again I handed him his water. It was very clearly not what he wanted.
Eventually he got sick of dealing with his obviously unhelpful Mommy and climbed out of bed heading for the kitchen. He wanted juice not water. He must have been thinking, "What does Mommy not understand about JUUUUIIIICE!?". Preston was going to just take care of this on his own.
I dragged myself out of bed after him. He'd already opened the fridge and pulled his juice container out. Sticking to my guns, I put it back and told Preston that he could have water not juice. We did this about three times. This is much more exciting at 2:30 in the morning than it sounds. Trust me.
Eventually Preston got sick of this game. And by sick of this game, I mean he was furious. A half asleep and furious two year old is not a pretty picture. Preston grabbed his juice from the fridge, slammed the fridge closed, and headed for the bedroom. Of course once again I followed. When I informed him along the way that he could not have juice he became enraged. By the time we reached the bedroom he yelled, "JUUUIIIICE!" one last time and then tossed the jug onto the bed.
Fortunately for Preston the juice didn't open, because I was already reaching my breaking point. I grabbed the juice took it back to the fridge, with Preston close on my heels crying out for his juice. I put it back to the fridge and informed Preston that if he pulled it out of the fridge one more time I was pouring it all down the sink.
Guess what? He pulled it out again. Apparently trying to reason with a two year old in the middle of the night doesn't work. Who knew?! I was not about to waste that juice and actually pour it down the sink. Hello budget, I'm not trying to teach you a lesson too. So I stuck the container in the sink picked up Preston and carried him back to bed.
He ran hysterically all the way back to the kitchen calling for his juice the whole way. Good times.
I, of course, had to follow him. He was standing at the sink looking like a big ole ball of snot crying and begging for his juice. I gave up and handed him the container and told him he could hold it but he could not have any.
Somehow content, he headed back to the bedroom. Once he reached the bed, he set the juice on my nightstand, and climbed up on the bed. He then switched his pillow and my pillow so that he was on the outside of the bed. I watched in amusement as he grabbed his container of juice and cuddled up with it in bed. He then insisted that I put his blankie on both of them. Minutes later he was asleep. With his juice.
I then did what any blogger would do, I grabbed my camera and took a picture. 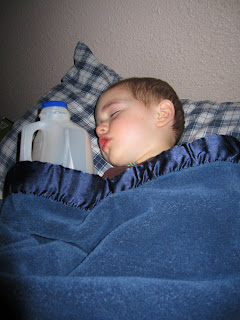 Plus I had to have proof of the whole thing the next morning, as somehow Brad slept through all of this. Some people get all the luck.

omg! that is hilarious. My daughter throws juice fits but she calls everything juice. her cup usually has water or milk, but she'll beg and cry for her "juice." But she hasn't cuddled her juice jug yet. That is too funny. I'm so glad you got a pic of that!

Hahaha I feel bad laughing because I'm sure it was not a fun experience for you to go through {especially at 2:30 in the morning} but that picture is priceless!

That is hilarious. That is a picture you will need to save for when he has a girlfriend. Bring it right out and be like, "oh yes he did".

the picture IS so cute though :-)
Kiran

That indeed is a girlfriend picture!! How freakin cute!!!