I have to start this off my letting you all know that my son fell asleep last night at 5:30pm. Oh yes, you read that right. 5:30!

I thought it was just a late nap and was cursing my husband for letting him fall asleep while I started dinner. But as the hours ticked by, I started to wonder if he was actually down for the night. When I went to bed at 11pm he woke up and asked for something to drink, I thought that was it he's going to wake up now. And then he fell back asleep after I got him his sippy. Miracle! He did finally wake up around 6am this morning only to lay back down content with his sippy refilled. He finally woke up for the day at 7:30am. Holy crap he must have been tired. FOURTEEN HOURS of sleep later he was feeling very refreshed.

We ran a couple of errands, including both Walmart and Target. Preston was pretty thrilled that we went to both the fishy store and the icee store. Score for him! While we were out my friend Kait called and invited us to come check out her new place. I was so excited! Not only were we already out, but we had some free time too which I seem to be lacking lately.

We had a blast hanging out with Kait and her kids and checking out their new place. Preston napped on the way there, another miracle! He woke up there and was full of energy. Racing all over the place. We were all having a great time until Preston went and bit Molly. And I'm not talking about a little bite. There were serious bite marks on poor Molly's hand. I'd reached my limit with Preston so we headed out. I wish I could blame the way he acted on lack of sleep, but there is no way he was lacking sleep after the fourteen hours he got last night. No way. I have no words for all of this fabulous behavior that Preston has had going on lately. I just want to hide somewhere...preferably with good snacks. I'm taking the advice of you my fabulous blog readers and blaming in on his age. And desperately trying to convince myself that Preston isn't the only naughty child out there. This will pass...it has too!

I opted to continue on with our plans for the day, in spite of Preston's naughty biting. We were meeting Nicole and Boone at the park and enjoy some of the warm weather. It was just what I needed. I think it was just what Preston needed too. 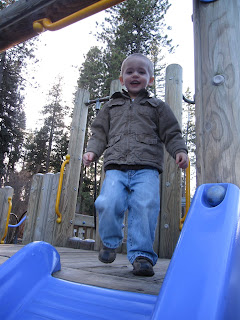 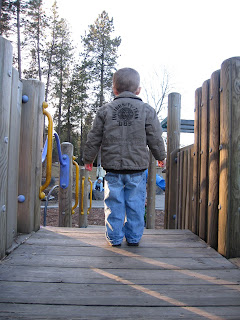 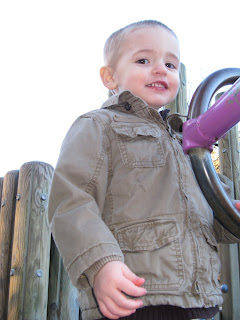 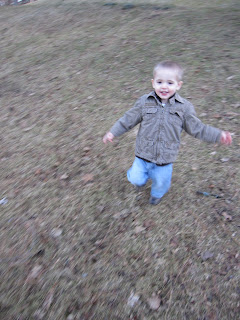 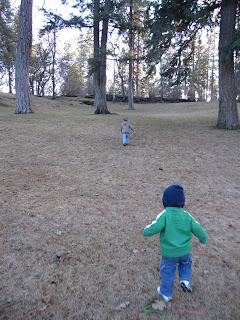 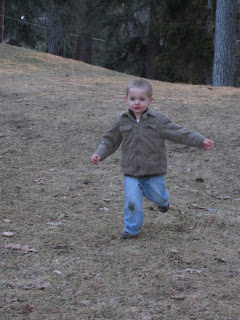 The chance to breathe in the fresh air. To enjoy the sunshine. For Preston to race around all over the park being the completely free two year old boy that he needs to be sometimes.

Fun was had by all of us. And when it got to cold to stay at the park, we headed up to McDonalds to enjoy the indoor play area.

Preston played completely nice at the park, which was a complete relief to me. No pushing. No shoving. There were temper tantrums when we left the park and McDonalds, but I'm going to go ahead and give him those. He just wasn't ready to leave yet.

And now I am enjoying some Grey's Anatomy and Chocolate Decadence pie...today was a good day.

It is his age, who knows why they do what they do.

I think you should've just stuck to your original plan and went skating. I'm sure that's why Preston acted out, because he really wanted to go. LOL

I had a great time with you guys today can't wait for Saturday.

Glad you had a great day!!! {minus the biting...don't worry I was a biter when I was little and turned out fine:) haha}

Maybe he had a little cabin fever and being outside helped.

He sure is a cute little biter!

Fun pictures!! I wish I could sleep for 14 hours, lol!