You all are not going to believe what happened in our house on Sunday. It's so unbelievable. So exciting! I just have to tell you.

Preston spent the entire day diaper-less. As in all day. From when he woke up to when he went to sleep. All day. ALL FREAKING DAY! And you want to hear the best part. Because it gets better. Preston not only spent all day diaper-less, he also didn't have a single accident. NOT ONE!
Even more exciting? Preston not only went pee-pee in the potty all day, but he did it all by himself. With no prompting or reminding from me or Brad. We just went about a normal lazy Sunday at home, only with Preston diaper-less! You know just in case you forgot...Preston was diaper-less ALL DAY with NO accidents. Whew, just wanted to clear that up.
It seemed that no matter what he was doing, he knew when he had to go potty and that he needed to do that in the bathroom on his potty. Playing with his cars? Got that feeling? Race to the bathroom. Snuggling with Daddy and watching cartoons? Gots to go? Race to the potty. Eating dinner? Have to go now? Off to the bathroom we go!
It was fabulous. Even more so because not only was he going pee-pee in the potty all day, but he was doing it all by himself. Which leads me and Brad to believe that we are much closer to being fully potty trained than we thought.
Now we're trying to come up with a plan. How to move forward with this potty thing. Preston does great at home when we allow him to run around with no diaper and no pants. We obviously can't take him out in public like that. So we need some ideas. I'm starting to lean away from pull ups again because I think they are just too similar to diapers and if Preston is in a diaper he will use it. But if we go to big boy under-roos how many accidents is it going to take to get this down? I'll need to pack extras of everything all the time. Or not leave the house, which isn't going to happen with me working and us just generally needing to get out. So many things to figure out.
But one thing is for sure...PRESTON IS READY! 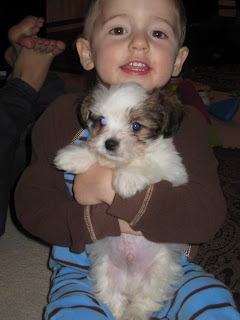 PS. My Mom told me this morning that when Preston woke up at her house, he woke up DRY! And went pee-pee in the potty!

how exciting this is such a milestone!!! I hope he continues to be good keep at mom your doing great!

Good job Preston! Way to go ...they know when there ready!!!!

Yay! Good job Preston! It must be nice that he's making this whole potty training thing so easy!

I would try some of those super thick training underwear. They are cotton, not diaper material, but thicker so its not *as bad*. I agree that pull ups would just feel like a diaper to him.

Good job Preston,keep it up!
stopping by from SITS