Mr Independent. I feel like that's what it means to have a two year old. Lately Preston has been asserting himself all over the place. He has a certain way he wants things done and that's that. Don't mess with his routine or there will be hell to pay.
The last few days he's been telling me that my iPhone is in fact not mine. It goes a little something like this, he points to my phone and says "Preston's phone". And then just walks away with my phone like that's all there is to that.
Today he even took it a step further. Not only way he refusing to allow me to touch or use my phone because it is "Preston's phone", but then he claimed the TV. He was watching his morning cartoons, which includes Little Einsteins, and I was watching Criminal Minds on my laptop, my latest rerun obsession. All of a sudden Preston pointed to the TV and announces "Preston's TV". He then points to my laptop and declares it "Mommy's TV". I have a feeling that if he's like this at two, he's going to be quite the problem when he hits his teenage years. 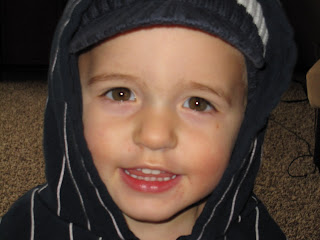 Knowing everything has also become very important to him. Before I used to be able to hand him a cup or make him food and he just accepted it. Now he asks if it's juice or water in the cup before he will take a sip. And heaven forbid I make him dinner without asking him what sounds good. He's a little person with his own cravings and preferences at dinner time. And yes we give in and let him decide what he will have for dinner. Don't judge me, please! Brad and I are both picky eaters so it makes sense that Preston would be too. Annnnnnd Preston has been trying new foods more often lately so allowing him to do this at his own pace seems to be working out well for us.
Feeding him has also gotten somewhat easier too. In the sense that he can kind of take care of himself. When he's hungry he grabs a snack out of the pantry or the drawer full of Preston sized snacks. Most often this includes grabbing a pack of Ritz crackers. In fact the other day he insisted on ritz crackers and cheez whiz for breakfast. No biggie. At least he ate. 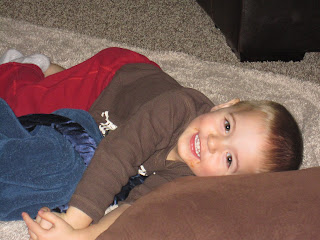 Juice has become a little bit of a problem with Preston and his new "I can do everything myself" attitude. Preston can open the fridge. Meaning that Preston can also get to the juice. Which all adds up to me finding juice spilled on the floor now and then. Or Preston bringing me a sippy cup full of orange juice and the lid that he can't seem to figure out how to put back on. But it's not just the orange juice that he gets into. We no longer have juice boxes in the fridge. Preston snuck in a time or two or five and opened them up and drank all of them before I had a clue. Even though he'd been told no juice and knew that he wasn't supposed to have any juice. How do I know that he knew he wasn't supposed to have any more juice? One of the times he brought me the empty container and told me "No juice". Way to rat himself out. The next time he learned from the timeout he received. The timeout that I had to give him because I needed to laugh and I didn't want him to see me laugh, after all what he did was naughty not funny. So the next time I realized he's been in the kitchen for too long and when I called for him he ran out. But still I suspected that he'd been into the juice, so I headed in. It wasn't on the floor, not in the garbage can, so I checked the fridge. My clever little child had drank and entire juice box and then put it right back in the same spot that he'd pulled it from . I wouldn't have even caught him had he not left the straw in it! Oh yes, we are going to have our hands full as he gets older and older. Although this whole opening the fridge thing is pretty awesome when he notices my water cup is empty and he voluntarily races off to fix that. Not bad for a two year old.
He's also gotten a little bit bossy. There's "C'mon" and "C'm Here" when I'm not moving fast enough. Or when he's done playing in the room that we're in and ready to move on. He'll call out "C'mon Mommy". And away we go. "C'mon Mommy" really isn't that bad. At least not compared to him calling me Kim. As in "C'mon Kim", "Kim, C'm Here!". He recently overheard Brad call me Kim and has now been testing it out. So far I've been ignoring him when he calls me anything other than Mommy. I hate it! It makes me sad, I don't want to to Kim to my baby I want to just be Mommy. 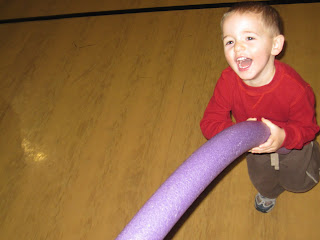 At least Preston's still a cuddler. One of his favorite games is How Much. I ask him "How much do you love Mommy?" He thinks for a second and says "Mommy?". And I repeat, "How much do you love Mommy?" He smiles and says, "How much?". My next line is "Yep, Mommy. How much?". To which he throws his arms out as far as they go and then I cover him in kisses. He loves it. I'm not complaining it means I get some cuddles! And some giggles!

Preston also insists these days on having me close the front door on him after I walk inside. He then rings the bell and knocks and waits for me to open the door for him. When I do, he looks at me and says "Hi!" He then waits for me to say "Hi, come on in." And after I do he tells me "Thanks" and walks in with a stream of gibberish. It's hilarious and he insists on it when we get home.

Not that Preston is talking in a whole lot of gibberish. He's becoming easier and easier to understand these days. Speaking in longer sentences and much more able to get his point across. I love it. It is so much easier for both of us when Preston can communicate with me and tell me what he wants or needs. 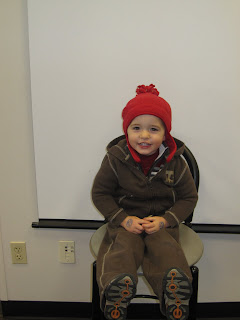 Although in becoming a better communicator Preston has also become a little bit of a manipulator. For example when we go to Target I always get him an Icee. It's part of our routine. It started when I wanted him to sit in the cart while I shopped and we've just continued on with it. Preston is content to sit in the cart with his Icee and I get to shop without trying to convince him to stay seated. However, the last time we were in there things didn't go the way that they usually do. Preston ran for the cart and insisted on the Icee, the same as always. Once he got that Icee he pounded away on it. Drinking it up so fast. I just figured he was thirsty. Until a few minutes later he handed it to me, told me he was "Aw Done", and tried to climb out of the cart. That's right he got his fill and then tried to back out of our agreement after he'd gotten what he wanted. It was the worst trip to Target that I've had in a while. Since we started the Icee tradition in fact. I've been avoiding going back.
All of this to say my little boy is growing up. And changing. And he's not my baby anymore. 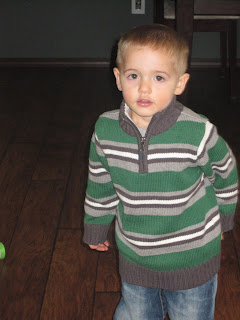 I cannot believe I almost forgot to mention, the biggest proof that Preston is growing up and learning to do things all by himself....Preston counted to NINE today! NINE! I have never been so proud. He was counting the chicken nuggets at lunch time. One minute he's helping me make lunch and the next he's counting to nine all by himself.
Where did the time go? And how do I get it back?!

how fun! I can't believe how big he's getting! where did you get that cute preston sized hat with teh bill in it? I cannot find any of those knit hats in aidan's size!

So your first part scared me, but then the how much do you love mommy made me smile and doorbell made me laugh - thank goodness! They do redeem themselves! ; )

Saw your twilight comment on the Disney ruining it all and had to stop by - so true!

Ahhhh, the two's. Not my favorite year to be sure. In fact, I think that was the year I experienced anxiety!

It's fun as they grow up...bittersweet though.

My almost 2 year olds new thing is to tell us at McDonalds what he wants. Just happened a couple times but his dad got to be there last night for it. It was too cute.

We have seriously picky eaters as well...and with my almost 4 year old we catered quite a bit. But we stopped, mostly, and make them eat what we are having. Of course, I'm careful to make sure there is something they like.

He is a cutie. My daughter is the same age and she does a lot of what he is doing. She is totally Ms. Independent - ridiculous.

I saw your status on SITS - I am in love with criminal minds too.