As do many other parents we take an annual Preston and Santa photo every year. This year I put it off and put it off. Terrified of what the photo would look like. I knew that I wanted, but I was absolutely dreading Preston's reaction to Santa. I attempted to introduce him to Santa at the beginning of December, but it didn't go so well. Preston was terrified and throughout the rest of the month every single time you asked him about Santa, he would yell out "NO!". This only increased my dread, which would explain why I waited until December 23 to actually get the photo taken.

If only we could go back to that first year. Where I just plopped Preston on Santa's lap and at four months old he couldn't really have cared less. Those were the days. 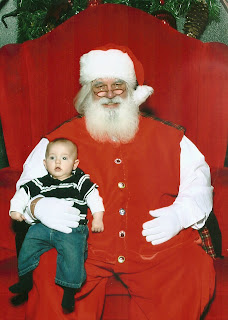 Last year, things were much different that that first year. At a year and a half Preston wanted nothing to do with Santa. He was so afraid that Brad and me went ahead and hopped in the photo with him. And even that really didn't reassure him all that much. He still looks like he'd love to be anywhere else. 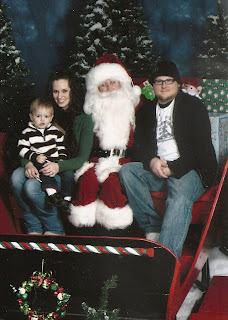 This year though I was determined. I wanted a picture of Preston and Santa, and just Preston and Santa. If I could get that photo with something other than tears and terror on Preston's face, well that would just be icing on the cake.

I'd like to call this most recent Santa photo a success. 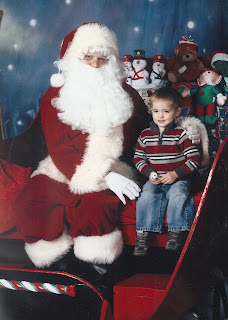 Preston isn't on his lap, but I can pick my battles. Next to Santa with a little bit of a smile is better than I was hoping for.

I had to prepare Preston. The whole ride there we went over his list. Practiced what he was going to ask Santa for. Preston rehearsed every item on that list the whole way there. He was confident, certain that he could handle a visit to Santa. I'm sure that the idea of what he was going to get out of it helped. Then we got there. He was still cool and calm. Ready. Until we were a few feet away from Santa and his sleigh. Then he changed his mind.

When I sat him next to Santa he flew back into my arms. It took some reassuring. And some encouragement. I convinced him to tell Santa his list again. Very quietly he informed Santa that he would please like, "Einsteins, Lightning, Cars, Rocketship". It was so adorable. He was whispering it and very unsure. Then Santa gave him a high-five. You could actually see the terror lessen. Enough that I was able to convince him to sit next to Santa. He was still unsure, but he wasn't in my arms. Of course Santa had some more tricks up his sleeve. Santa asked Preston to give him knuckles, and we were golden. I was able to step back out of the sleigh and off to the side.

I stood next to the photographer, as Preston wasn't comfortable enough with Santa to let me out of his line of sight and we wanted him to be looking in the direction of the camera. That little half smile, that's a result of my child finding it hilarious when the photographer's assistant attacked me with a quacking duck. I will take it.

In fact I'm looking at this as though it was a Christmas Miracle!

Oh Kim, that picture is adorable!! Way to go Preston.

Hey, that is a great pic! Leia (2 yrs old) wouldn't even get close to Santa. She squeezed my neck so tight every time I tried to get near Santa. The one picture I have is of me standing by Santa with her facing the wrong direction wrapped around my neck. So, you got a great pic in my opinion!!