Today should have been a crappy day. Mostly due to the fact that it snowed last night. A couple inches worth. I'm not sure if I've mentioned it before but I really am not a fan of snow. I hate that it starts out all pretty and white, but before long it's ugly and gray. I hate that it turns everyone into a crappy driver (myself excluded of course). I hate that it means it's cold outside, freezing in fact. I hate that as it melts it either turns to slush or ice. I pretty much just hate snow. So today should have been an awful day, simply because it snowed.
Today should have been a crappy day. Instead today was a fabulous day.
I woke up this morning thinking about how I'd have to search the garage for our snow scraper/duster. I've been stubbornly refusing to get our garage door fixed, partially because I don't want to pay for it and partially because I'd kind of hoped that if I didn't fix the garage door it would help keep the snow away. Silly I know. Which meant that my car was parked outside. In the snow. But when I got up, I found my snow scraper/duster sitting on the counter in the bathroom. A certain husband had pulled it out and brought it in for me. But that wasn't all that he'd done. My husband who has to get up for work at 5:45 in the MORNING in order to get to work on time had also shoveled the walk way. He'd even shoveled down the driver's side of my car. Making it so that Preston and myself were able to head outside and get into the car without getting covered in snow! I knew there was a reason I'd married this man! 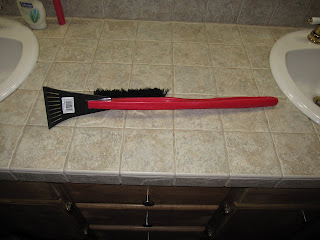 Of course we had a reason for leaving the house on this snow-y Tuesday. A couple of reasons in fact.
First we were headed downtown to surprise my mother-in-law at work. Tomorrow is her birthday and we were bringing her balloons and candy. Why today when her birthday is tomorrow you ask? She doesn't work on Wednesdays and I thought it would be much more fun to surprise her at work than it would be to surprise her at home. Most things are better with an audience!
Boy was she surprised. Probably even more so becuase in order to get into the building she works in you have to have a key. And then to get onto the floor she works on you have to have a passcode in the elevator. It's all very secure. Fortunately for us, her and her boyfriend work together on the same floor. So after some very secret text messaging back and forth, we had a plan. I would let Dave know when we'd arrived and he would come down and let us in.
We arrived with Preston carrying the balloons and walked over to her desk and waited until she noticed us. It was hilarious! She looked at us and then did a double take and asked how we got in. Preston then entertained everyone with his counting, adorableness, and fascination with some of the toys in her work space. He even shook one of her co-workers hands and told him "Nice to meet you!". It was so cute.
Our day didn't end there. We said good-bye and happy birthday to Gigi one last time and we were off.
We had plans to meet a friend of mine. Yep, meet a friend. As in I'd never actually met her before. We'd both been a part of a Mommy group that I was in last Spring. When that group shut down, we continued to talk through our blogs and facebook. She just moved back to town and it was time for us to actually meet! Preston and I went and picked up her and her son and headed to the park to play. 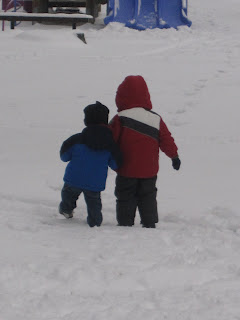 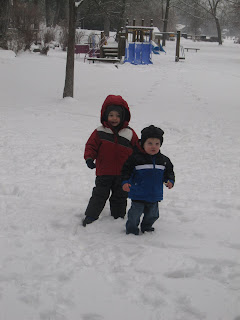 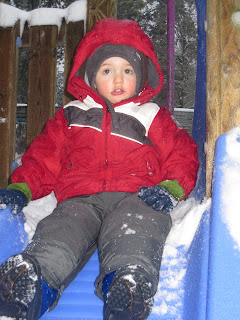 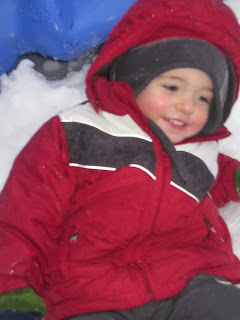 It was so much fun! Preston loved playing with Boone and I had a great time talking to Nicole. You know in person, where you can have an actual conversation! One that doesn't involve facebook chats, emails, blog comments, or texting. A real live face to face conversation, imagine that.
We had so much fun that we made plans to get together again next week. Although Preston decided that waiting another week to hang out with his new friend Boone is just too long. After they climbed out of the car, Preston kept telling me "No Boone, NO!" He didn't want Boone to leave, it was so cute.
The icing on an already great day? My husband made dinner. Nothing fancy, but still it kept me out of the kitchen.
Is it too much to hope that tomorrow is as lovely as today? I sure hope not!

Your hubs is a doll for shoveling you out and leaving the snow brush, and then making dinner. Sounds like a keeper to me!

We had a ton of fun to thanks for making our day Kim & Preston! Can't wait to come make cookies!

Cute photo's!! Totally jealous of that snow!!! Glad you had a good day! :)

As a mom-in-law I can tell you I bet your mother in law really appreciated the effort.
Mary

What a wonderful day! How sweet and thoughtful of your husband to do that!! See, it's things like that - makes all the difference in the world. And what you did - surprising her before her birthday and getting into the secured area for the surprise... wow, you are just as sweet and thoughtful!

Glad you enjoyed the snow (can you send some to New Orleans, please?)