My baby is suddenly not the baby anymore. Preston is the big boy. Mason is now the baby. Fortunately Preston doesn't seem to have any issue being the big boy. He also doesn't seem to have any issue sharing Daddy, Grandpa, Grandma, Auntie Jessie, Uncle Kyle, etc with Baby Mason. Mommy on the other hand, well she's not up for grabs.
That's right Preston has a serious issue sharing me with my new nephew. And I do in fact mean serious. The kind of serious where I'm really not getting to hold Mason all that much.
If I am holding Mason, Preston goes through a variety of emotions.
He might attempt to climb on my lap while Mason is already there. Or he has opted to lay next to me and refuse to sit still. Both of these options leave me holding Mason with one arm and trying to keep Preston from getting too close to his little cousin. These also result in my Mom offering to take Mason and my sister getting this look of fear on her face while she watches her nephew get just a little bit too close to her new baby, all the while she's trying to bite her tongue because I am her sister and Preston is her favorite nephew. Meaning that I end up handing Mason off and accepting my cuddles from Preston, who doesn't seem to care all that much about what I'm up to now that I'm not holding Mason anymore.
Preston's response isn't just physical. He will also tell me where Mason needs to go. For instance he has told me several times, "Mommy give Baby Mason back Aunt Jessie" or "Mama give Baby Mason back Nee-Maw". He's very vocal about everywhere Mason should be other than my arms. And very bossy.
Don't get me wrong, Preston is interested in his baby cousin. As interested as a two year old can be. He did insist that we allow him to hold Mr Mason. With a little help from me my sister was willing to give Preston a chance to cuddle his new cousin.
First he had to prepare... 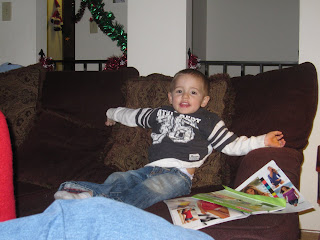 Then it was time for the big moment... 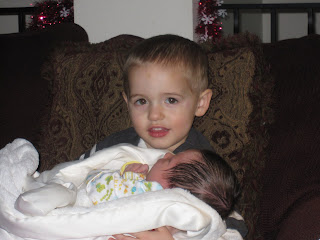 How cute are they?!
The icing on the cake? After Preston had his turn holding Baby Mason he announced, "Mommy's turn!". And I was allowed to hold and cuddle Mason as much as I wanted for the rest of the day. How about that!
It was short lived though. By our next visit Preston was back to his old ways and very much so unwilling to share his Mommy. Can't say I mind too much. I get some cuddles with my baby and my new nephew when I can sneak them in! Although it's really looking like it's a good thing that Preston is still an only child and that we plan to keep it that way for a few more years!

those pictures are so freaking cute. my daughter is 2 1/2 - she does the same thing to me with her little brother. it gets easier and she is adapting more each day but it was tough, almost comical in the beginning.

thanks for posting the pictures - precious!

Little boys sure do love their mommies!
Stopping by from SITS! Have a great weekend!

So sweet! Amen on the potty training too!
stopping in from SITS!

Awwwww, I can't wait until my little man has a little one in the fam to play with. All his cousins are in MN and quite a bit older.

I am so lucky JDaniel doesn't seem to care if I hold a baby. Thanks for stopping by.