SoccerTots! Just saying it makes me excited. Excited that Preston is in sports. He's already learning the excitement that comes with being on a "team". I use team in quotes, because at this point in soccer Preston isn't on a team so much as he's part of a group learning about the fundamentals of soccer. There are two other little kids on his team. A boy and a girl. We spent an hour with them on Saturday morning, them and our coach, learning all about soccer. Preston was so excited and it was so stinking cute.

I have to be that parent now. That one who brags in a ridiculous way about their child. I apologize in advance, but it must be done. Preston was the most athletic one on his team. The most athletic one. The other kids weren't even on the same level. Not even close. Preston lapped them, literally. I was so proud! SO PROUD!

I should also mention that Preston arrived with a fan club. It was actually a little bit embarrassing. The other two kids arrived with their parents; Preston showed up with both me and Brad along with Grandma and Grandpa, two of his Aunties, and Gigi and Dave. A whole group of us there to support and cheer on Preston. What can I say, we were all so excited. Plus there's that little boy that we are all just crazy for.

What did Preston learn you ask? We set up cones and kicked them over. We then used our feet to set the cones back up. Only to then knock them back over. There were some practice shots into the goal. As well as some running. First me chasing Preston while he wore a cape. Then it was my turn with the cape. Only I couldn't get Preston to chase me. That is until I took the soccer ball away. Then he chased me all over the place. There was also an obstacle course. This is where Preston really kicked butt. We were supposed to tip toe across a rope ladder that was laid out on the floor, jump through a hula hoop, jump in and out of some hula hoops laid out on the floor, fly like an airplane through some cones, jump over a bunch of pool noodles, and finally jump through one final hula hoop. Preston loved the obstacle course. As soon as his coach started explaining what he was supposed to do he was struggling to get up and get going. Once he was up, he not only completed the obstacle course correctly but also lapped the other kids not just once but twice on their first run through. Not bad! I was so proud. And worn out. Seriously, exhausted. In fact I tagged Brad in and stepped off to the sidelines to catch my breath and take a break after the course. We ran that obstacle course probably close to fifteen times. Preston wasn't even winded. He quickly moved on to the next game. Following a course and kicking the ball into the goal. Then finished off with a parachute game. 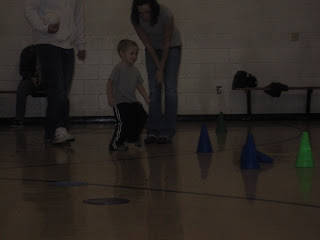 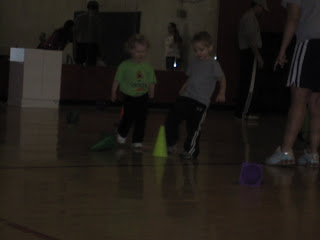 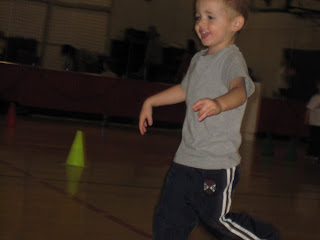 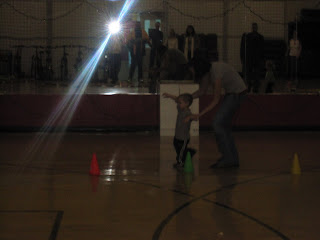 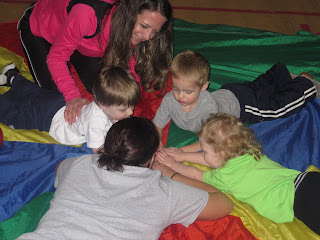 Preston loved every minute of the whole experience. I know that he is going to be so excited when we walk back into that gym this weekend and he sees that he gets to do it all over again. Only this time I hope that he's a little better at listening when it's time to sit and learn about the next game. He didn't do so awesome in that department. While Preston could run circles around the other kids they sat and listened so much better than he did. It was a struggle to get him to come to his spot when the coach called for it and even more of a battle to get him to stay there. We're clearly going to be working on that. He just wants to go, go, go.

Sorry for the crappy pictures. I was a participant, meaning that my camera was handed off to my little sister and then Brad. Neither of them really seemed to get a handle on it. I promise to take better pictures of Preston at SoccerTots this weekend. Much better pictures. Not that it will be hard, considering the amazing lack of quality in these ones. :) Well except for that last one. I took that one during my break.

Go Preston! I wish they had soccertots here!

Wow! I'm impressed. How cool that they have that for children Preston's age and fantastic that he enjoyed it!!! Brag on - you have the right!!

How own fan club! How cute!

V enjoyed Soccer Tots too! But the 1st summer was better than the 2nd b/c of the coaches we had . . . so it depends a little bit.

Looks like he had lots of fun...and hey every kids needs a fan club.