Whew, I'm exhausted. We had a fairly busy weekend and Preston had some late nights, leaving me exhausted.

We of course started the weekend with SoccerTots. In fact I think we are going to continue on with SoccerTots after this session ends. Preston loves it and I love having him involved in a sport. Plus he already seems to be learning so much. Not just skills required to play soccer, but also things that are beneficial to him outside of sports. Such as listening, learning, waiting his turn, and interacting in a physical (but nice!) way with other kids that are both his size and smaller. I would say bigger, but Preston is definitely the tallest kid in his SoccerTots class! This week Preston continued to improve on sitting on his spot and following instructions that the coach gave him. I did have to pull him aside a time or two and let him know that if he didn't plan on playing soccer than we would be going home, but after that reminder he got right back on track. Preston also tried his hand at some basketball after soccer was over. He even slam-dunked...with Grandpa's help! 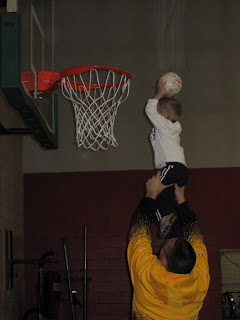 After soccer I dropped Brad and Preston off at home and headed over to the DOL. Nothing better than showing up two hours before closing on a Saturday to make some changes to your driver's license. It was busy. But I finally got around to changing my last name over to Brad's last name. We've only been married for almost a year. It's about time I took care of that!
Since Brad had some classes to take for continuing education in plumbing, I ran home and picked up Preston. We headed over to the library. I realized that Preston hadn't been since he was like seven months old and then we only went for a Baby Lapsit class. It was time to pick up a library card and some books. Preston loves to read and be read to, meaning that he loved being at the library. He seemed in awe of all of the books everywhere. When it was time to leave he kept telling me "NO Mommy, books!". We will definitely be back.
From the library we paid a visit to my parent's house. Preston was desperate to play in the "Spooky Room". My Mom has turned a basement bedroom into the spoooky room of the house and Preston loves it. He would drag someone downstairs with him and they'd turn off the lights and make ghost noises. Clearly I'm not raising a scaredy cat!
Sunday was just as busy. Brad's Mom bought us tickets to see The Lion King with her and her boyfriend. Meaning that Preston got to go back to Grandma and Grandpa's house and play in the spoooooky room. I'm not even sure he really noticed or cared all that much that we were gone he was having so much fun. Grandma took him to McDonalds for lunch and then to the mall for some shopping, where Preston convinced her to let him play in the play area for over an hour!
While Preston was busy, we were enjoying The Lion King, it was so good! Seriously so good! They did such a great job and the animal costumes were very impressive. Definitely a must see. I wish that Preston had been old enough to sit through it, he would have thought that the animals were so cool. As the show started at 1pm, by the time it was out we were starving! My fabulous mother-in-law not only treated us to the show but also to dinner. YUM. I'm still full. It was so much fun to get out and be able to sit and watch the play and then to eat a grown up dinner. Although if I'm being honest I was watching the little boy in front of us a little bit throughout the show and missing Preston every time he got excited about something. I can't wait until Preston is old enough to enjoy things like this!
We picked up our sleeping baby from Grandma's house and headed home to finish off the weekend watching The Lion King with Preston. Just because he had to miss the show doesn't mean he has to miss the movie!

Sounds like such a fun weekend! Glad you enjoyed it. And don't worry I still haven't changed my name on my S.S. card and I've been married 4 1/2 years!

I had the good fortune of having an aunt take me to NYC and we saw The Lion King on Broadway. You're right....the costumes are AMAZING. Loved it. :)

Holy Canoli, you had one busy weekend! I think I'm being industrious if we make it to church on time!

Great shot of your basketball star... as I was scrolling down, it looked like he was dunking it on his own! Too cute!

After a couple of months being married, Greg kept asking, "Are you going to change your last name?" Hehe.

I think it's wonderful that soccer is teaching your son so many important lessons. Kudos to you for getting him involved in the sport!

I'm glad you enjoyed The Lion King. I can imagine you wanting to bring your son in the future and watching his eyes light up!

Sounds like a great weekend! Thanks for stopping by!!

Sounds like a fun weekend, but it also sounds absolutely exhausting.

Congrats on the library card. My library card has changed my life and has helped keep so much money in my bank account!

SPEAKING FROM THE CRIB said...

sounds like you had a great weekend and busy too

Sounds like a great weekend, especially seeing the Lion King!

You've had a busy time! It sounds lovely though. xx