Halloween! I love Halloween! I used to love dressing up myself, but now I just love dressing Preston up! This year he was an adorably ferocious dinosaur. Watch out world! Halloween was a busy busy day for us. SoccerTots, a carnival, and trick or treating. 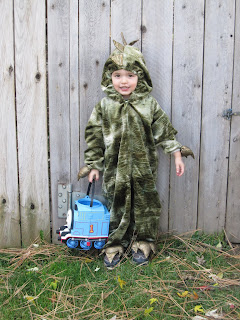 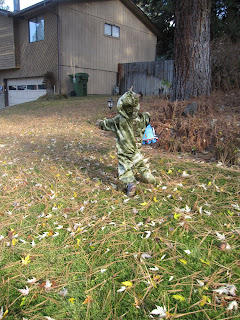 We attended the Halloween carnival at my little sister's elementary school. Preston had so much fun. He played a little basketball. The hoop was just his size. He was slam dunking every time he got the ball! Obviously if this soccer thing doesn't work out Preston has a potential basketball career. Although soccer is still on the table as Preston played the soccer game too. Scored a point with every kick. Which also meant that he got the max amount of candy every time it was his turn. Sugar overload! Because that was clearly not enough fun, we also did the cake walk. Not thinking, I went and ahead and signed both me and Preston up separately. I figured that there was no way that when they called both winners it would be both me and Preston. Guess what? It was. We won cupcakes. Twice as many cupcakes, as both my number and Preston's number were called. Preston couldn't have been more thrilled and dug right in. We were loading Preston up on all that sugar so that he'd have enough energy for trick or treating. 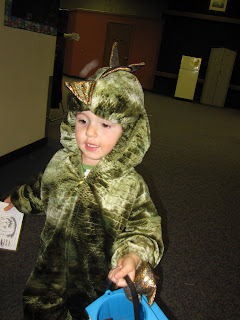 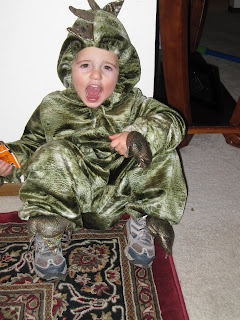 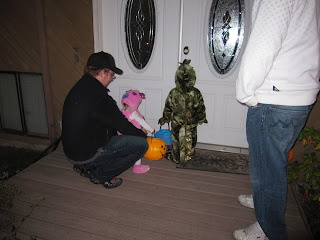 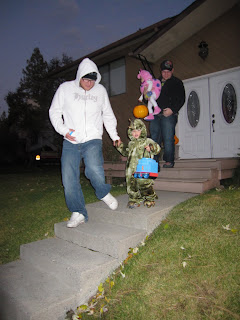 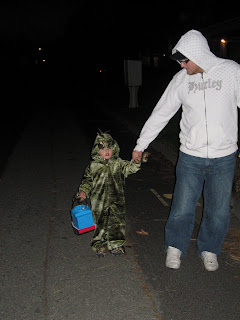 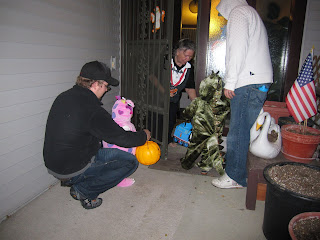 Even more impressive, Preston walked the entire time and carried his bucket too. I only picked him up at the very end, on the walk home. That bucket had to be getting heavy and his little legs had to be getting tired, but still my little dinosaur pushed through. 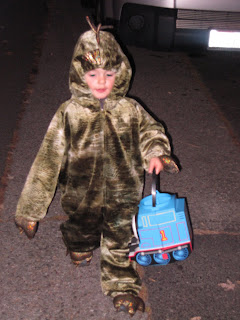 Preston and Lily trick or treating was just about the cutest thing ever. Preston would walk up to the doors, set his bucket down, and ring the bell. He'd take a step back and pick his bucket back up and wait. At the houses that were participating in Halloween, when they opened the door he would say, "Trik o Teet". Lily would stand next to him holding her little bucket in one hand and her sippy in the other and both would accept their candy. Preston would politely tell the candy giver, "Thank you", "Thanks", or "Thank you much". And then we would move on to the next house. At the duds, Preston got a little pushy. After he'd rung the bell, he would wait for a second then he would knock. When his knocking went unanswered, Preston would then attempt to open the door. I would of course inform him that no he couldn't open a stranger's door. So he would call out "Hello? HELLO?". It was almost more fun when no one answered. For us adults at least. 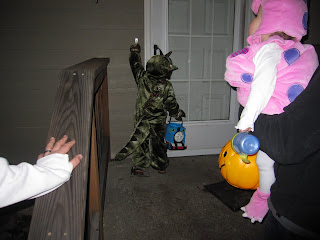 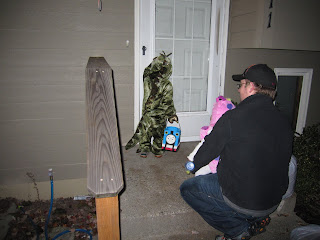 We did have a few more laugh out loud moments that night. At the first house Preston attempted to walk inside. He did his knocking business and when they answered he headed on in. Brad had to catch him and pull him back outside. Later on that night, I asked Preston to stop in between houses so that I could take a picture of him out trick or treating. Randomly throughout the rest of the night Preston would call out, "stop!". Then he would just stop wherever he was and say "cheese". He's ready for his close-up! Perhaps I should have dressed him up as a model instead of a dinosaur? 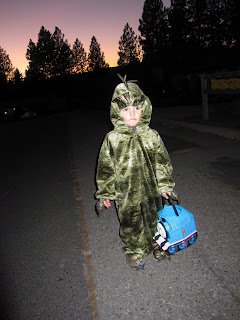 All in all I would call Halloween a success. Especially when Preston fell asleep at 7:30pm on the way home. Trick or treating really must have worn him out because he slept right on through the night all the way up until 8am. That would be the 8am after the time change. The 8am that used to be 9am. Oh yes, trick or treating was a success.

We had a LOT of fun with you guys! I am so thankful you invited us! Preston got me really excited for next year with Lily!

He is the cutest dinosaur EVER!

Love how him and Jae were the same dinosaur!! Super cute!