I did it. Not only did I go see New Moon opening weekend, but I also saw it opening day. In fact I saw the first showing in theatres ever. That's right people I was one of those crazies at the 12:01am showing Thursday night/Friday morning. It was insane! The theatre that we went to sold out all ten theatres that they were playing it in. There was a little bit of a crowd.

Kait went with me, in fact it was her idea to go to the midnight show. Yay for Kait being as fanatic about Twilight as me! Of course being that staying up until all hours is something that we haven't done in a while, we also made a mandatory stop at Starbucks on the way to the theatre. It was a necessity to survive the night.

I'm not going to lie there were some crazies there. Not that surprising really when you think about the fact that you have to be a little bit insane to decide to go see a two hour movie that starts at midnight. In fact some of the people were so crazy that they were taking photos with this cardboard cutout of Edward, Bella, and Jacob... 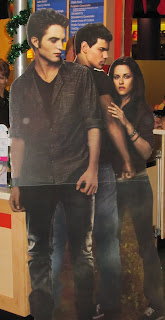 I know, I know...it's just a cutout don't embarrass yourself people. There is no reason to be rubbing up against a piece of cardboard. I was just so embarrassed for them. 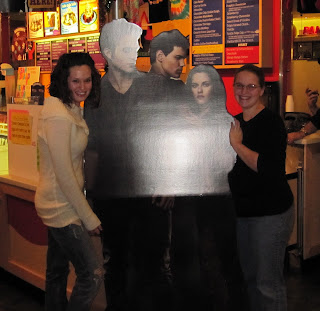 Oh wait, it looks like me and Kait were some of those crazies. Hello Edward! If only the picture wasn't so crappy.

Then it was time to head on in and enjoy the show. It was packed. We got so lucky and happened to score two seats in the center in the row behind the bar. Not too far forward and not too far back. Even better was that when I had to use the restroom (all THREE times, thank you Starbucks) all I had to do was hop the bar. 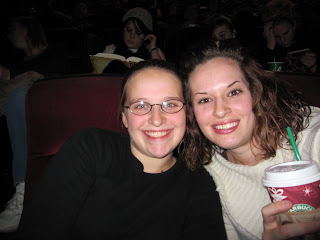 Now the movie. Hmmmm...what to say. I've got some mixed feelings on that one. I left the theatre furious. I'd just reread the books so everything was nice and fresh for me and every change that they made was just so freaking obvious. I'm sure it didn't help either that it was like 3am. Eeek! But the more that I think about it the more that I liked the movie. They really did do a great job covering all the key points of the book and not changing things up too much. I'm dying to see it again. I just know that it will be even better the second time. The first time that I watched Twilight after reading the books, I noticed all the differences and hated it. But everytime after that first time I liked it a little more and more. I finally stopping seeing all the differences and just focused on the movie. Now all I have to do is figure out when I can see it again!

I can't watch the Harry Potter movies because of the stuff they change. You miss out on so much! its just not fair. But I'm glad you had a good time taking pictures with cardboard!

I never read a book too close to watching the movie. The differences always bug me. But, like you, I realize why they do them.

I can't wait to see New Moon! I'm rereading the books first though, so it will be a couple weeks (I keep reading in bed/falling asleep, LOL)

Glad you enjoyed it. I did the same thing with Twilight...the more I watched the movie, the more I liked it though.

I hear that the newest Twi-movie is so much better than the last one. Bigger budget, better acting. I still think Edward's a tad homely, though...

I saw it on opening day with my husband, but I was not one of the door-busters. Haha.

I loved the movie, but the actual experience was awful because there were about 50mil 13 year olds occupying the theater that would scream like banshees anytime either of the leading men came on the screen and I actually told a group down the row from us to shut up already. Additionally, two mothers brought BABIES to the movie! (They cried, of course.) Who does this?

@Melissa B--- I think Edward is overrated, too.

But the movie was very much worth the hype. :)

Can't wait to see the movie!
Dropping by your blog crib to say Helloooo lol Wishing you a wonderful Thanksgiving ...remember it's not about the food we eat but the love we share!

Happy Thanksgiving from one of your SITStas!!

gosh I didn't even brush my hair and you had to post those? LOL. j/k
Thanks for going with me!!

I will be seeing it tomorrow!

It's always weird when you love a book, seeing what Hollywood does to it. Most changes are for obvious reasons but some you just wonder WHY? My mom is dragging me to see it tomorrow...I'm seeing it as a favor to her. I read half of Twilight and took it back to the library. It never pulled me in.

Yeah, I was definitely one of those crazies that was howling every time Jacob took his shirt off and if there was a cardboard cutout at the movie theatre I would have most definitely taken a picture with it lol.

I loved the movie. I thought it was a million times better then the first one and Taylor Lautner might be the finest specimen of man (or soon-to-be man) that I've ever seen.

So fun to see you guys all obsessed.... lol