I'm going to be completely honest here. Gotta get this off my chest. Promise you won't think less of me?

I am absolutely beyond excited to see New Moon. Really I am. I am a Twilight fanatic. No doubts about it. I even reread the books, you know to prepare for the movie coming out this month. I wanted to make sure that I remembered every detail, every single one.

I'm kind of dreading the whole experience. The lines. The wait. The packed theatre. Mostly though, I'm just dreading the movie. It will be good. I know it will. And I love me some Robert Pattinson. But it's just not going to measure up. It can't possibly be as good as the book. They are going to leave things out. They are going to change things. Things that I love about the book.

There's this small part of me that wants to spare myself the disappointment. I look at the other movies opening this weekend and think maybe I'll just see one of those instead. Like The Blind Side. This one looks really good too. Maybe I should just buy a ticket for it instead. Avoid the crowds of New Moon and hold off what is sure to be a slight disappointment when compared to the book.

Then I watch a preview and I remember why I'm going to be there opening night in the theatre that is playing New Moon. Even if it's not as amazing as the book it's still going to be good. I'm still going to like it. Like it enough that I'll probably want to see it again. And if it's not and I don't, well at least I got to stare at this for two hours. 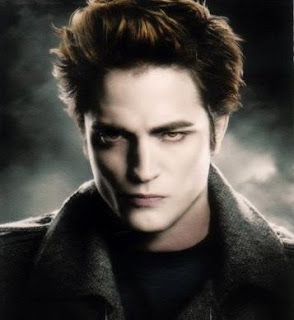 I am SOOOO with you! I waited to see Twilight until it was almost gone from theatres. Robert Pattinson is simply "OK" when compared to the Edward in my head from the books, right? But, I also cannot wait to see New Moon either!!!!

I have a little something for you over on my blog! :)

I am ecited to see it too.
I will be at the 12:10 showing Friday morning. I cant wait Iknow there is no way it can be as good as the book but I know it will be better than the last one.

And hey, you know it won't measure to the book. No possible way. That's OK - the book was good enough to inspire the visual. Enjoy that part of it. :)

I'm waiting to avoid the lines too. And true, the books are MUCH better. At least Rob looks as hot as I imagined Edward to be, when reading. If I can feast on the eye candy, it's all worth it. hahaha

Think of it like this, the book gives you the missing information that the movie cannot possibly include because the movie would be 10 hours long. You can use your background knowledge you learned in the book to help you bring more to the movie as you watch it. That is how I look at it anyway.

I don't so much like that they totally change things from the book to the movie though. They could keep it exactly the same and just leave parts out.

I also don't look at Edward as just Edward, I look at him as Bella's Edward. He is not seen in my eyes apart from her. The love they have for each other is what I admire and think is beautiful beyond words.

I cannot wait for the movie and think it will be better than Twilight and worth the lines, the wait, etc. I bought my ticket online last week and I haven't been more excited about a movie since...uh...NEVER!

I am stoked, too!! I can't wait til Friday night! I even convinced hubby to go even though he wasn't a fan of watching Twilight with a bunch of girls screaming every time Rob looked hot...which is always! Yes, the books are way better, but my heart jumped when I saw the preview...so excited.