We had one of those quiet and lazy weekends. It was mostly my fault. Or at least that of my monthly visitor. I was exhausted. Drained to say the least. Simply moving around left me feeling like I was going to drop dead. Not to mention that my visitor left me in pain with every movement anyways. And to top it all off, we ran out of Aleve on Friday and I didn't have the energy to go get anymore myself or beg Brad to either. So I suffered.

It wasn't all bad. There was the part where I didn't have to move from bed except to take a bath, that was pretty nice. Brad handled feeding us and taking care of Preston while I tried not to move unless I absolutely had too. I even got in a nap on Saturday. Since Preston doesn't nap anymore, I never nap anymore. It was nice, I've missed napping.

A perk of spending a lot of time in bed this weekend? I finally got to start rereading the Twilight series. Yes, that's right. Rereading. With the second movie coming out, I've been wanting to read these again and just haven't found the time. This weekend I found the time. A lot of time. Since Friday night I have managed to get through the first three and more than half of the fourth. Not that it was difficult, what with Edward there encouraging me to keep on reading. Oh Edward. *Swoon*
We did get out of the house on Saturday morning. Preston had SoccerTots! He did just as good this week as last week. In fact, you could even say he did better. This time he actually listened and sat on his spot when he was supposed to. Improvement! There were also more kids there this week, which made it more fun for Preston. Preston is quite the social butterfly, in a very masculine way of course. Just today he informed me that he'd like to see his friends please. Poor kid doesn't seem to enjoy spending time with a Mommy who doesn't have the energy to move around much. As you can see from the pictures, the lighting and everything about the gym makes it practically impossible to get the best picture and trust me I tried. :( 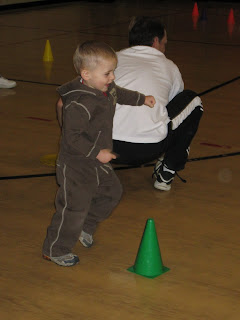 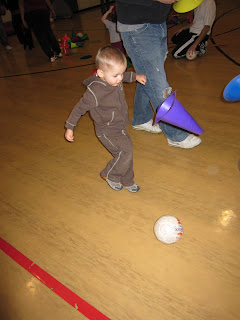 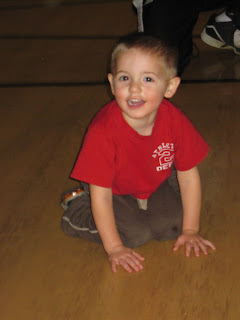 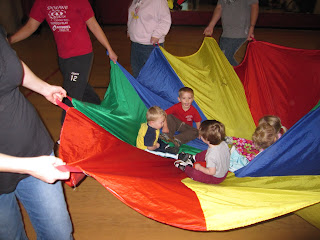 Luckily, I'm feeling almost back to normal now. Thank goodness. As much as I loved the quality time that I was spending with my Edward and having Brad do all the cooking, I have things that I need to get done around here. There's cleaning (oh the mess that my two boys managed to make while I was in bed), there's grocery and Christmas shopping to be done, and so much laundry. Ahhh, sometimes it's nice to catch a break and spend a weekend in bed but I'm ready to reclaim life again.
Before I start reclaiming that life, I have exciting and big news around our house from last week. I know you are just dying to know, Preston recently learned something new. Something new and exciting. All by himself. Well almost all by himself. He had a little bit of help from my iPhone. Preston learned ALL of his shapes on Wednesday. He started playing with a shape app on my phone on Monday and by Wednesday Brad and I were watching him and he had it down. He was getting them all right, we were shocked. Absolutely shocked. We really hadn't started working on shapes yet and three days with my phone and BAM! I bet you're now wondering what shapes he knows? Maybe not...but I don't want to forget! Get ready for the list...circle, square, triangle, rectangle, hexagon, crescent, star, heart, and diamond. Needless to say we've downloaded a few more educational apps. One for numbers, another for letters, and one for colors. Preston already knows his colors but we figured it doesn't hurt to have a game that encourages him to continue working on it. I hadn't really considered teaching Preston his numbers yet, but I figure it can't hurt. I'm so excited right now about the letters app. He did so well with the shapes that I figure that along with what we've been working on letter-wise right now a game that works in the same direction definitely won't hurt. My baby knows his shapes, he's so smart!

Knowing his shapes already is very advanced...what a smart boy!

It is amazing how far behind things get just by being sick! I haven't started the Twilight series yet. Maybe I should.

Wow - what a smart little guy.

Oh my land! How cute is that!!
Sure seems like a lot of pictures for somebody who was 'under the weather'.
Don't worry about teaching him too much- let him experiment. I was gonna say 'he might surprise you' but it looks like he already has!