I've mentioned that Preston loves trains. Loves loves LOVES them. The boy is crazy for trains. Borderline obsessed even. Knowing this I'm sure you can just imagine his excitement when we went on a real live train ride this weekend. Oh yes we did.
We took a nice little drive out to the small town of Ione, where we met our train. We arrived early, really early, because we'd planned on sitting inside. It's been in the fortys around these parts lately and there was no way I was toughing that out in an outside cart. We lucked out though and this weekend was gorgeous. It was just warm enough for us to sit in one of the outside carts and not having to worry about freezing to death.
I'm so glad we did. Preston was able to stand up and run around and explore and really get to see the scenery. The BEAUTIFUL scenery. I can't even explain how fantastic everything looked. I won't even try. Instead I'll just show you. And tell you that I think that Fall is the best season ever to take this train ride. 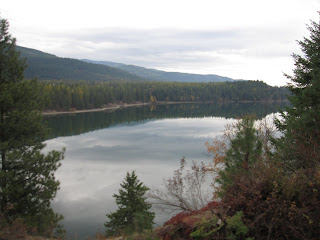 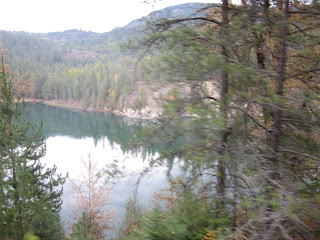 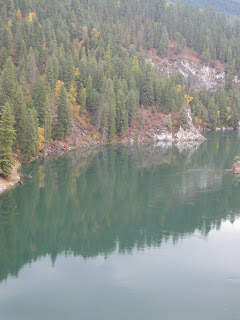 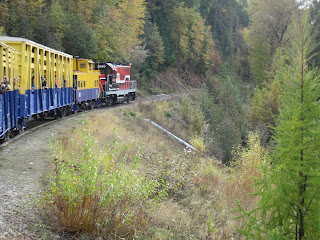 As we'd arrived early for our original plan of obtaining an inside seat, we had some time to kill. A whole hour and a half. To be exact. An hour and a half to explain to my two year old that we needed to wait for the train to come back and that yes we would be riding it soon. For the most part Preston handled it well. He explored the tracks with Grandpa. He drove Thomas on the tracks. He played with his Auntie Marrissa and my cousin Maycie. He rolled Thomas up and down the handicap ramp and chased after him, so they could do it all over again. He waited. 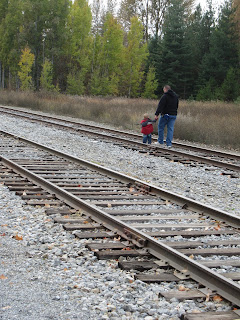 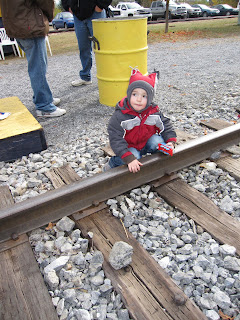 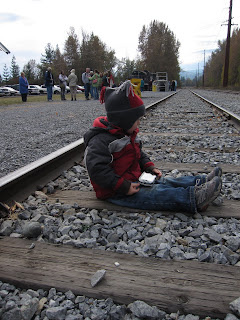 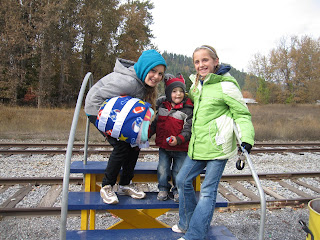 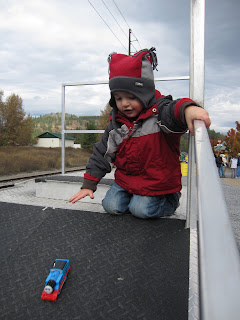 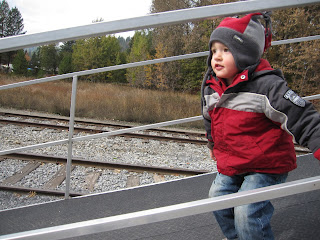 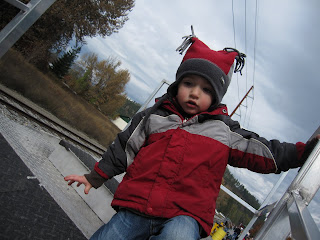 Just as a full meltdown was about to ensue...the train pulled in. 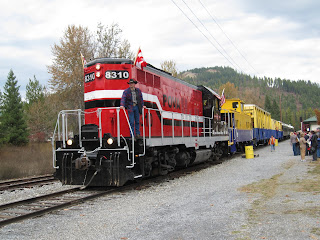 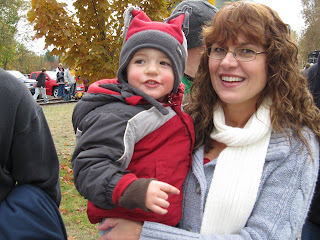 We boarded and found our seats. Then we waited some more for the train ride to begin. 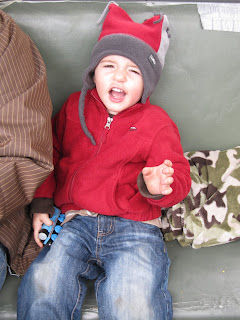 Once it began, Preston refused to leave his "Nonna's" side. Seriously refused. Everytime I reached for him he screamed at me. He didn't want me, Brad, my Dad; he only wanted my Mom. 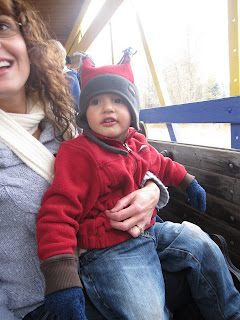 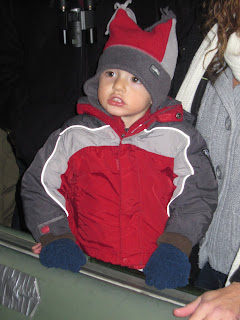 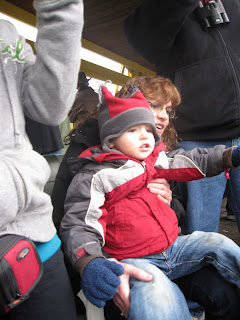 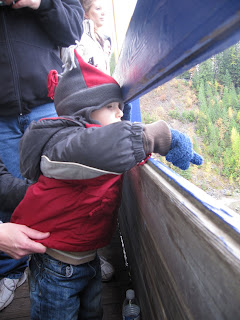 Half way through, when we were stopped and "robbed", Preston finally was willing to sit with me and visit people other than just "Nonna". Although when the train stop began to take too long, Preston insisted that he wanted out. "Out, OUT!". One of the "robbers" heard him and offered to take him away to "live in the woods" with them. Preston was all set to go too. I'm pretty sure it had something to do with the guinea pig one of them was holding. 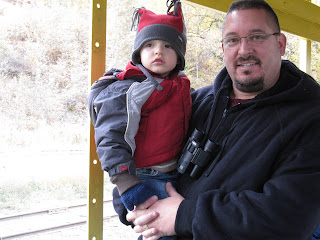 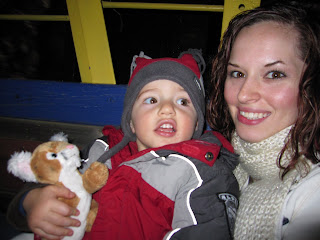 Finally we were off again. Preston decided he needed to lay down and pretend to take a nap. 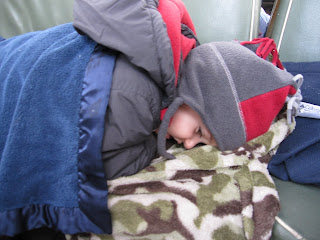 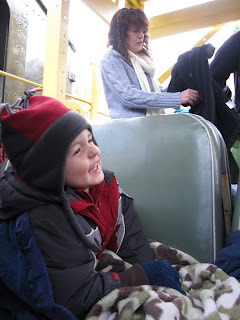 Once he'd "woken up", he informed all of us that he would like to go back in the "dark, more dark". Meaning Preston would like to go back through the tunnels that we'd gone through on the way there. He was in luck since the train had turned around and was retracing it's steps for the second half of the ride. Preston loved the tunnels. After each one he would insist over and over again "dark, more dark. DARK!". My Mom thought it was hilarious, especially considering that I am afraid of the dark. 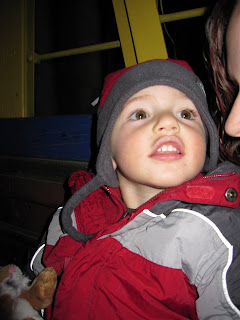 The rest of the ride back Preston spent his time watching the scenery fly back, snuggling up with me, visiting his Gigi, and all around just enjoying his ride. He was also starting to become a little bit tired. I think it was all the rocking of the outside cart. 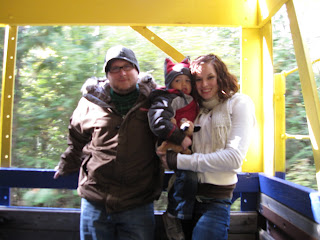 Somehow though, he not only survived the train ride without falling asleep, but also our drive from Ione to Colville for lunch. Not a single wink of sleep. We kept expecting it, but nope. He was zoning out, but not sleeping. He made it through all of lunch. Bouncing off the walls even. Then was awake the whole ride home. Seriously people, we probably spent four hours in the car on Saturday and Preston slept a grand total of none of them. Not to mention the hour or so that we were on the train as well.
I think that this train ride is going to become a family tradition for all of us now. It was so much fun and a great day away with family. Plus I love traditions! Almost as much as Preston loves trains.

I just have to ask, how many train sets do you run during Christmas? I'm picture a whole bunch going around and around the tree! These are some cool shots! Preston looks so happy and totally soaking it all up, loving every moment. And wow - beautiful scenery is right!

Beautiful photos. My son is still a train lover. Preston looks like he is having such a great time.

Blessings to you and your family!

I love traditions, too. That looks like a really fun train ride....though you have to bundle up. I have a train trip planned for sometime or other. :-)

Wow! What an awesome time! The scenery is beautiful. I know my sons and I would have enjoyed that ride too.

I love scenic train rides! Your pictures are beautiful. My father was obsessed with trains as a boy, and he never grew out of it. Now 65, he is just waiting for a grandson to pass on the addiction. :)

How cute! What a nice new tradition!

I love his matching coat and hat, where are those from?


Congrats on being the first sits commenter today!

Great pictures! My GIRLS love trains too. Hope you get to make it a tradition.

Stopping by from SITS Have a great day.

Great pictures!! Stopping by from SITS!

Great pictures, love the background! Visiting from SITS have a great day!

How great! What wonderful memories you are making.
Dropped by from SITS.

Visiting from SITS and just love your post! Your son sounds adorable and I think its great he has something he loves so much! I do hope you enjoy this as a family tradition for years to come, those are the best times!

Coming by via SITS!

my son is obsessed with trains, too! What beautiful scenery for you guys to look at!

You have a super cute family! My son is two as well, and has just started getting into trains. He is a big animal lover! Now it is trains. I think this boy is going to be one of those I can't decide what I want kind of kids!
Hello from SITS!

Hey SITSTA! Your little man is adorable... I noticed his birthdate in your sidebar - just 9 days younger than my little guy (who also LOVES trains - must be the age!). I wish we had something like this in our area, I would go hop on that train in an instant! Love the pics!