Pumpkin Carving Round One

We did a little bit of pumpking carving at our house last week. Brad was just too excited to wait. Really. Since it was already late I told my husband that there just wasn't time to carve all four pumpkins before Preston's bedtime and we agreed on one. Like a child on Christmas morning Brad gathered all the tools. He was ready!
Preston wasn't sure what was going on and was just happy to welcome his "pumkie" back into the house. He'd been a little upset when we'd banished it to the front steps after our trip to Greenbluff. But now Pumkie was back.
As this was Preston's first time ever carving pumkins and it was a smaller pumpkin we decided to just carve a simple Jack'O'Lantern.
Preston was not sure what was going on. Brad cut the top of the pumpkin and at first Preston seemed interested in what was going on. He stuck his hand inside and quickly decided he'd have nothing to do with the goop in there. What can I say he's my child. I handed Preston a spoon and he was willing to work with that. As long as it didn't touch his hands. 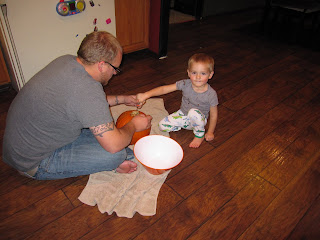 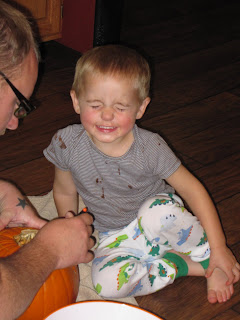 We hollowed that sucker out and got to work. Preston's favorite part of this whole process was that he got to draw the picture on the pumpkin. With my help of course. Had I given him the sharpie and told him to go to town, we would have ended up with much more than just eyes and a smile.
Preston then helped Daddy cut the pieces out. Which was really more of a fight with Daddy over the tools that were used to cut the eyes and smile out. Preston also became very upset as we pulled the pieces out of his Pumkie. He kept putting them back in and telling us "NO!". 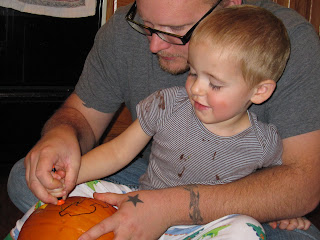 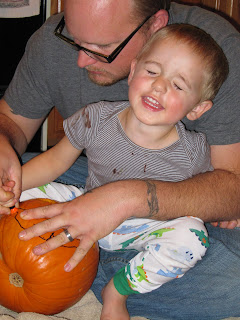 In an effort to show Preston what we'd just done we grabbed a tealight candle and lit it inside the pumpkin and turned the lights in the kitchen off. Preston was completely uninterested in this and decided that he'd rather blow the candle out than watch the pumpkin light up. Another battle between Preston and Brad began. Finally I grabbed the pumpkin and tossed it back on the front steps.
One down, three more to go!

PS...Please excuse the chocolate all over Preston's clothes. We had just finished making brownies and as he is my child he insisted on licking the batter off the mixer, the spoons, and out of the bowl!
Posted by Kim at 7:59 PM

Does Preston's new "cheese" face include closing his eyes? He looks so darn cute!

I didn't like pumpkin guts when I was little until I realized we could make food with them. I would pick out the seeds to toast and use the insides to make pies or whatever. Then I was a big fan of scooping the pumpkins!

Carving pumpkins is so much fun! You never get too old to carve pumpkins.

Awww.. I've never carved a pumpkin or had one before.
You've inspired me to buy one and let my boys create a masterpiece.. :)

Thank you ever so much for your kind words on my blog. I'm going to look into some more mother & baby groups. I'm determined to have some mummy friends by the end of the year!!

Fun! We did pumpkins last year with my boyfriend's daughter and her friends. After about 15 minutes the kids lost interest and the adults ended up doing all the work!

Since he is too little to carve the pumpkins you should try felting them with him. See my post under halloween on how cheap and easy it is. It's perfect for kids.

SPEAKING FROM THE CRIB said...

i remember my son used to be so squeamish about taking out the pumpkin 'guts' and now he can't wait to do it - great pics!