Picking up where we left off in Part One... 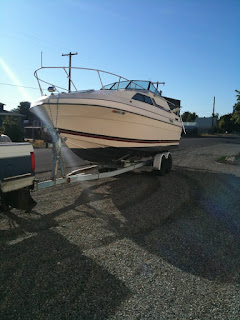 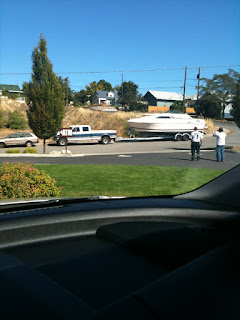 Here's to selling the boat. And Craigslist for making it happen. Even better here's to not having to pay to store something that you'll never use again. I hope Steve and his wife enjoy the damn thing!

Labels: Brad, For Sale, Irritation, Me

Bless your heart! But I can honestly say that I know how you feel...except it was with a mortage and a house...not a boat.

We moved and had our home 4 sale for over 2 years, while paying rent on another house we were living in also....it like to have killed us!

I lnow you must be on cloud 9 to have all that behind you!

Wow. That is one HUGE boat. And it was in your backyard? Wow. Just. Wow.

And what a story to go along with it. I know about the dot the i's and crossing the t's with titles. It's a mess and one thing wrong can stop the works. I'm glad you finally got rid of it!!

What a nightmare! I'm glad it is all over for you.

Holy cow! What a story. I was getting stressed out just reading about it!

Glad it's done. Imagine all of the new toys your husband can buy with the money you are saving from storing the boat!