One Boat Sale Later...Part One 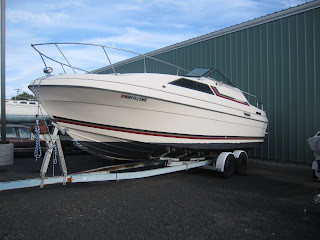 Way back when, okay so it was only about a month ago, we sold our boat. And by our boat I do in fact mean that I sold Brad's boat. That boat was never mine and I refuse to lay any claim to it. There was no love lost between this boat and me.

Brad bought the damn thing back in June of 2005. On a whim. Who in their right mind buys a boat on a whim? Even better who says that they are going to buy a ski boat and somehow ends up with a Bayliner? As if that's not good enough, Brad also bought this boat knowing that he had absolutely no way of moving it.

It was sitting in a slip out on Lake Coeur D'Alene when he bought it and apparently after taking it out for a tour of the lake he decided that was enough and he'd take it. Not many questions were asked and Brad did NO research whatsover about boats. Nor did he know anything about boats. Basically not a whole lot of thought was put into this purchase. None at all. He didn't even realize that he'd bought the trailer too until the company that owned the slip asked him to move his trailer about a month into his ownership. I know, I know, he's a thinker that husband of mine.

So for one whole summer, Brad used his boat. Dumped hundreds upon hundreds upon thousands of dollars into this boat. This is where being young and dumb and still living at home was a good fit for Brad. He used to joke that BOAT stood for "Bring On Another Thousand". He's a funny guy that husband of mine. At the time we were just dating and I honestly couldn't have cared less what he did with his money. It was his. Plus it's not like he had anything better to do with it. I'll admit I was a little bit disappointed that instead of spending the summer wakeboarding and tubing on his boat, instead the boat was used as a way to hop from beach bar to beach bar and as a purpose of partying on the water. I never said he was responsible back then.

However when we moved out together and then proceeded to have Preston and get married, the boat became my problem. First when we'd been living in our house for a month or two and his Mom informed him that now that he was no longer living in her house, his boat could no longer be parked in front of her house. Can't say I blame her. It was then moved to our backyard. That's right, we were the neighbors that have this HUGE boat parking in their backyard. The same neighbors that had no way of moving said boat around once it was parked as neither of us drive a truck or know anyone with a truck big enough to move a boat of this size. Do you see how the boat might have been starting to get on my nerves by this point. Also go ahead and add in the fact that now that we owned a house, we didn't have the money to rent a slip or pay for the gas that it would require to use this boat. So instead it just sat. In our BACKYARD!

For almost two years it sat back there. Until one day, I'd had enough. I was sick of looking at the damn thing. Sick of getting angry everytime I went into our backyard and realized that a full quarter of our yard was being taken up by a boat that I didn't even want. A boat that we didn't even use. Something had to be done. Especially since Preston's first birthday was coming up and with his birthday being in the summer it would be an outside party. And I refused to have an outside party with that horrible thing sitting univited and unwelcome. It was time for the boat to move on.

I mentioned selling it to Brad, who refused. What if we wanted to use it again? It was the perfect size for spending a lot of time on the water. Especially with Preston. He had a point. There were two bedrooms, a bathroom, a dining room, and a kitchen in that boat. And that was just below deck. Above deck there was space to hang out too. The best part being that there was a door separating below deck and above deck and that door locked making it safe to take Preston on the boat and not worry about him escaping from below deck to upper deck. I was convinced, we'd hold on to it for now. As long as it wasn't in my backyard.

So away the boat went on a tow truck. Off to a storage center. Where the boat began costing us money. When Brad bought the boat he paid for it in full. Living at home with your Mom when you're twenty-one has it's perks and extra cash is one of those perks. When you factor in him working full time and not having to pay rent, Brad was well off financially for his age. No bills will do that to a person. Plus Brad had savings from when he was young. Although somehow this boat that had been paid for for three years was now costing money.

It went on that way for a year. It took a year for it to finally sink it to me that it was time to get rid of the boat. That we were wasting money renting a spot at a storage center for something that we just wouldn't be able to afford any time in the near future. Remember those nasty slip rental charges and the gas? Plus we couldn't even move the boat without paying for a tow. A craigslist ad went up and we hoped for the best.

Ahhh men and their toys. At least our toys (clothing, shoes, purses, etc.) are small! My stepdad bought an RV...his third...without my mom's permission. It was a "classic," which meant it broke down every time they tried to take it out. They've been trying to sell that thing for three years. It sits in their driveway, unused, and when they take a vacation they pay to rent a nice RV. My mom will never stop saying, "You shouldn't have bought that" to him. It's her big "I told you so!"

My husband's toys are guitars. Much smaller and easier to store and move.

I laughed though when you said the boat was kept in the backyard. Please post pics of that!

"It took a year for it to finally sink it to me that it was time to get rid of the boat."

See that had me laughing ~ "sink" and "boat" in the same sentence. Bravo!

Greg likes gadgets and if we could afford a boat, he'd be on the Craig's List looking for one faster than you can blink an eye!

I can TOTALLY get where you are coming from - both the backyard boat and also the storage. I wouldn't want it either. Looking forward to the rest of the story!

Boats and motorcycles always seem to get pushed aside. Stopping by from SITS. Laughing at your comment there...I used to sit next to Patrick Dempsey at the Kings Ice Hockey games!
Holly @ 504 Main

btw..stopping from SITS..oh and I'm having my first giveaway! if you're interested, just stop by :)

I wanna know what happens next! :O)
Stopped from SITS. x

AH! That would drive me crazy too! And it sounds huge -- that's not a boat, it's a yacht!

Oh man! That would drive me batty!!! I sold my motorcycle via Craiglist... and many baby items as well! Here's hoping!

I'm obsessed with Grey's Anatomy reruns too! I can't stop watching them and I DVR all the ones I can find on TV. I think I am obsessed because I don't think the last two seasons have been as good as the first 3 so i wanna watch those as much as possible!

Gotta love the toys. Wish I could afford a boat, but know it is out of my budget.

Stopping by from SITS
-Trixie
swooningthecity.blogspot.com/

There's an award for you on my blog today:

seriously med are CRAZY! They say we are and we buy crazy ass things! A bayliner and no way of moving it and never using it is just plain NUTS! Plus a storage unit...ya...
GO GIRL! HA! Besides seriously you have a family and responsibilities. If he used it all the time it would be one thing.

Have you sold the boat? Great post! You have such a sense of humor, very enjoyable when it comes through your posts!