Fun At The Fair

This blog has been without pictures lately. Plus after yesterday it was a little on the glass half empty side. It's time to rectify that. What's the point in having a little boy this cute, if I can't show him off? And if looking at pictures of Preston doesn't make your day a little more glass half full, you might be beyond help.

We visited the fair a couple weekends ago. Which gave me ample opportunity to get many pictures of Preston. Adorable pictures at that.

We started with the cars. Preston is quite the little driver. He takes it all very seriously. Such a little boy, and one that definitely takes after his Daddy. 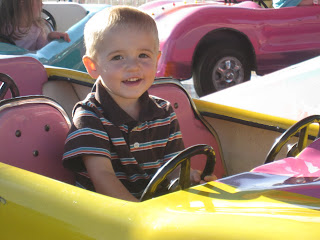 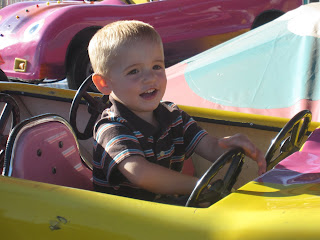 From the cars we moved onto the trains. I know, that's a shocker. My son wanted to ride the train?! What? Who? Oh yes, he did. I had to restrain him in the stroller while we waited for his turn as he was refusing to let a gate stand between him and his train. This was also the very first ride ever that Preston climbed off of all by himself while I waited behind the gate for my big boy. I'm not going to lie, I almost started crying because he's getting so big and he's my baby. 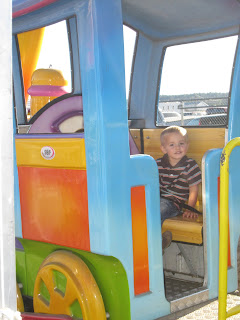 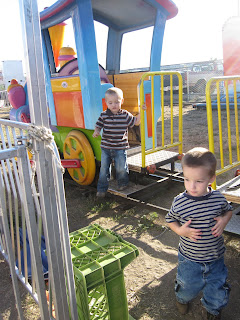 From the train, Preston headed over to the cars that not only allowed him to drive but they also did some springing too. Preston loved that it drove him around in circles with some up and down action too. I think this may have been his favorite ride at the fair. 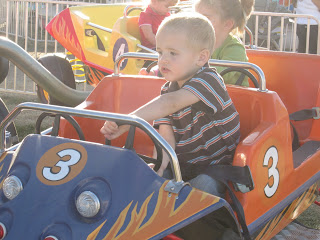 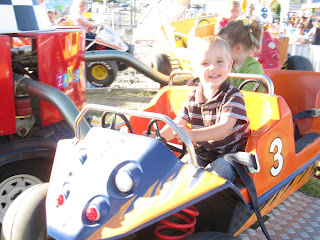 We couldn't leave the fair without letting Preston ride a motorcycle. Especially since his Daddy and GiGi are motorcycle fanatics. This gives me a little bit of a heart attack when I think about it for too long and realize that Preston will more than likely end up riding motorcycles as well eventually. For now I'm counting my blessings that the closest Preston will get to riding a motorcycle is at the fair. And that it will stay that way for at least a few more years. 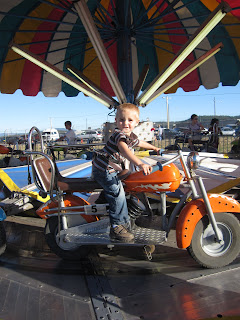 We toured and rode another train while we were at the fair. Preston loved walking through a real live train. It was full size and he could actually walk around and explore on the inside. Or more accurately run around and explore. While we were in the train section, we went ahead and took a ride on another train. This time Brad and I got to ride too. Preston even got a little conductor hat. 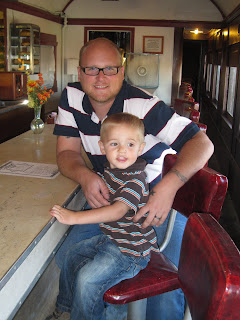 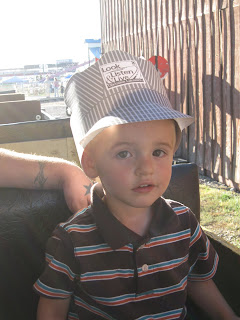 Have I mentioned lately that Preston really likes trampolines? I'm sure you can imagine his excitement when we passed a trampoline at the fair. We opted to let him try it out. This one was a little bit different. They strapped him in and let him go a much higher than he normally would on a trampoline. At first he seemed to really like it. Then he realized that the straps wouldn't let him bounce around the whole trampoline. They mostly kept him in the same spot and let him go high, but he didn't want to go high. He wanted to run around and enjoy having the trampoline all to himself. It was quite a fight to get him to climb down. There may have been some screaming involved. From both of us. 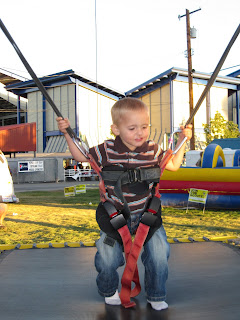 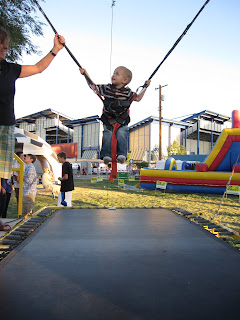 Because I felt bad for forcing Preston off the trampoline, him and Brad did a little rc car driving. It seemed to go a long way in gaining Preston's forgiveness. 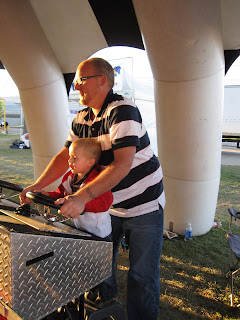 One final ride before it was time to head home. We'd promised Preston that he could ride the rollercoaster before we left and we had to make good on that promise. So ride the rollercoaster we did. All of us in fact. Preston once again proved how brave he is and insisted that he could handle it. But not only could he handle it, he also watched all of the big kids lifting their hands up as we headed up the hill. What did my fearless little boy do then? He lifted his little hands up too. That's right he wasn't holding on for dear life, but rather enjoying the ride. On the final ride up the older kids didn't hold up their hands for the hill, but Preston seemed to have noticed how exhilerating it was and he did anyways. That's my boy! I have a feeling I'm going to have my hands full with this little boy as he gets older! 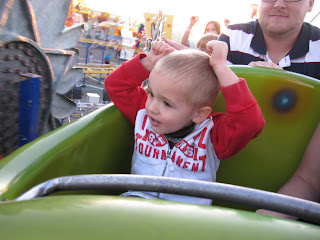 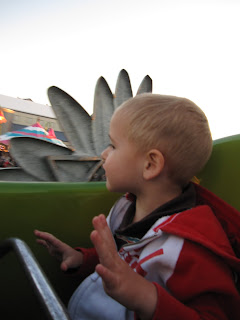 Wow, I feel so much better. Looking at the adorableness of my two year old seems to have that affect on me. I hope it helped improve your day too!

Well, you accomplished what you wanted to do - you put a smile on my face! Who can resist such adorable pictures! And this cracked me up: "There may have been some screaming involved. From both of us"