Preston's been a busy little two year old lately. Very very busy. Meaning that I've also been very very busy. Which in turn makes both of us exhausted. I'm going to be honest, we've both had a cranky moment here and there. Surprise surprise. Fortunately we've also had more than a few laughs too. 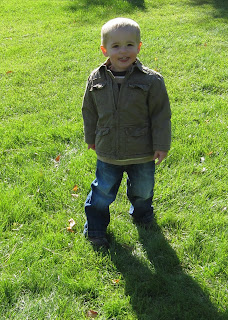 There's been the potty training. It's going phenomenally. I'm very impressed with how well Preston is doing. Which is not to say that I haven't had to adjust my expectations. Just seems to go with the territory of being a parent. Nothing really goes the way that I planned for it to. The things that I expect to be difficult might be easy, and the things that are supposed to be easy are sometimes difficult. Thus far, I've decided to approach potty training in a much much more laid back way than I'd originally thought I would a month ago.

Preston likes using the potty. Really seems to get excited about it. At first I thought it was the gummy bears that he got for going in his toliet instead of in his diaper. But we ran out of gummy bears yesterday morning. I'm picking some more up tomorrow, but he's made it for almost the last forty-eight hours without gummy bears. Still using the potty like a pro. I'd estimate that half of his bathroom breaks are now in his toliet with the other half in his diaper. Not bad for him only being two and just starting to use the toliet. Also I haven't been pushing him...at all. Just letting him find his own way to do this. When he says he needs to go pee-pee, we go to the bathroom. If he goes in his diaper, that's fine too. 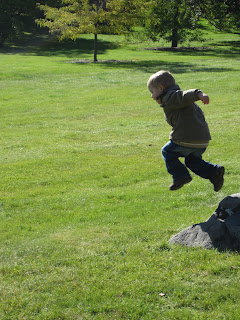 In fact just yesterday morning, he finished off the gummy bears with a doozy. He got up for the day and was enjoying his breakfast when he started to use the word "itch" a lot. If you remember this has been a code word for Preston either being poopy or ready to be poopy. I kept checking him, only to find nothing. Until Preston disappeared into the bathroom. I followed him back and asked him if he needed to use the potty. After being told that "yes, yes" he did. He sat down. What followed next made me feel bad for his toliet. His poor poopy toliet. It's kid sized you know. But there was nothing kid sized about what he left in there. If Brad had been home he would have been so proud. As is I was thrilled that I didn't have to change a diaper full of that!

We're taking potty training as it comes. So far it's going great and when Preston's ready we'll move on to trying underwear out more during the day and using diapers a little less and less.

Preston also recently figured out how to open the deadbolts on our front and back doors. He likes to keep us on our toes, you know. I blame Brad. In the two weeks that he's known how to do this, he 's only escaped a time or two. Luckily only long enough to get to the grass in the front yard before I come chasing after him. Mostly he uses this skill to let the cats in and out of the house. It's helpful to me. As long as he remains inside. Although it really has put a damper on my morning shower. Now I have to drag Preston into the bathroom with me, just in case. We're still trying to decide whether or not to put either a chain or kiddie door handles up on the doors. As he doesn't really use this new talent to run away, I'm not sure we'll have to do anything. I'm hoping it stays that way. 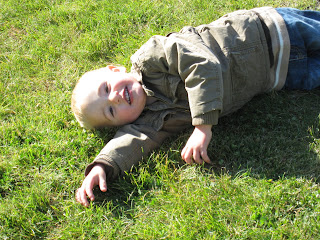 Speaking of locks, Preston's also discovered how to unlock the door levers around the house. Makes locking him up for a timeout a real pain in my ass. Especially when two seconds into his minute long time out he comes racing out. This one really is Brad's fault. I locked him in the bathroom with Brad one night bc he kept climbing out of the bath and Brad was still trying to rinse the soap off of him. What does Brad do? He teaches a furious Preston how to unlock the door so he can once again escape. I don't know about you but I learn things much quicker when I'm angry and it appears Preston takes after me there. All it took was Brad showing him that one time and now he's got it down. Just terrific.

We've also started working on letters here and there. Preston thus far is doing okay with it. When I can get him interested. He likes the bath letters the best. I'm thinking that I'm going to pull out flashcards and get serious about this. I'm just a little bit confused about how to teach him. Is it enough to just show him the letter at this stage? Or should I show him things that start with that letter too? Maybe that's too much? Start simple and after he's learned his letters move on to how to use them? It's all so much to think about! So far he seems to recognize "A" and "H". But only the capital letters. That's another thing, do I teach him upper case or lower case? Or both? Or one at a time? And if I do it one at a time, which one should I start with? Whew, I start to get overwhelmed just thinking about it! 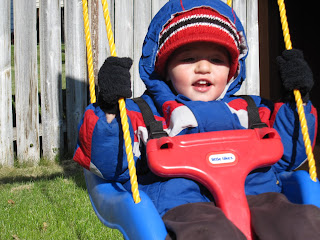 There's been a lot of role playing around here now. Preston's really been using his imagination. He carries his stuffed cats around with him. Insists that I change their diapers when I change his. That they come to bed when he goes to bed. They also need a blankie at bedtime too. Not to mention that he still crawls around and impersonates our cats and my parent's dogs. It's so cute to watch the games that he comes up with. I've forgotten what it's like to just entertain yourself. It's been a nice little reminder.

I can't finish up a Preston update without mentioning the dancing. Preston is quite the dancer. Anytime, and I do mean ANYTIME, music comes on Preston has to dance. But it's not acceptable for just him to dance. I have to dance too. Then he turns into a little mimic and starts copying my moves. I really hope that I don't ruin his dancing skills with my complete lack of talent. Just tonight he was watching Madagascar 2 and everytime they started dancing he would too, only he would copy the way that they danced. It was hilarious! Too cute for words. 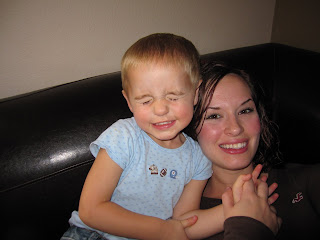 I don't think I could be any luckier. I have the cutest and greatest little boy in the world! Well except for the tantrums. The boy can throw a tantrum. But really I only have myself to blame for that one. Because Mommy, well Mommy knows how to throw a tantrum!

You asked about letters and teaching... made me curious as to what people are saying about this. I found this and though most likely you've done a tons more research than me (considering I don't have children)

But I thought it was interest: "Toddlers learn differently from older children, so don't pull out the flashcards just yet. Instead, rely on visual aids such as colorful alphabet picture books. Have your chidl point out the letters he knows, as well as colors, shapes, animals, etc. There are lots of fun ways to introduce your child to individual letters. Sign his name to his artwork, then point out each letter one by one. You can put his name on his room or a toy or puzzle personalized with his name. Play word games - What words start with B? Ball, baby, boy. Or use the first letter of his name as the starting point - your special letter is P, can you think of any other P words?"

Does he know the alphabet song?

It's mainly about exposure and conversation as long as you are doing those 2 things, he will catch up.

There is a program for teaching children at 4 to read it's called Reading First. You could look into that. It has a high success rate and is linked with Reading Mastery which is a great program for remedial reading in the elementary school.

Hope all that helps.

When Jaeden was probably like 9 months old my mom convinced me into buying him one of those v-tech toddler laptops. Well he didn't really start playing with it until like 8 months ago and out of nowhere he was showing my sister the letters and playing a game where he had to find the matching letter to the one on the screen. Also it has another mode where when you push a letter it says the letter and then says a word that starts with it and a picture shows up on the screen, so now Jae could recognize about 97% of the letters and if he doesn't know it, he'll know a word that starts with it. I was impressed. So lately, I've been making him say the letters of his name before bed (the letters hang on his wall) and we play with alphabet books and things like that. I agree with Holly that exposure and conversation are key. Although, I can't take too much credit for Jaeden, he learned himself. I'll just take credit for his intelligence =D..

Oh, we may be making a visit next month too!!

Sounds like you're enjoying time with your LO! every day is an adventure with a toddler.

stopping in from SITS!!! You have a beautiful family!!