We've been doing a lot of swimming and outside play lately in an effort to enjoy every last little bit of summer that's left. Don't you know winter is coming? And it's bringing snow and cold and indoor play with it. We are fighting back with everything we've got but somehow I just know that winter will arrive anyway.
Instead of sulking about it, we've spent days in the pool. Up at my Grandpa's condo. Preston and I headed up there while my parent's were vacationing for a day of sunshine and swimming. At least the sunshine part was on the agenda for both of us. Preston refused to get in the pool. I dragged him kicking and screaming only to give in to his desperate cries to be put back outside of the water.
That is until I headed up to use the restroom. I came back down and Preston was happy as a clam swimming in the water with Grandpa. Apparently Preston is much braver in the water when Grandpa is holding him than when Mommy is. Then we couldn't get him out. 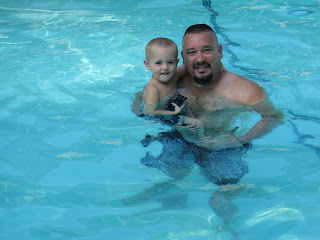 Especially when he discovered the shallow end, where he could touch. Thus began the game of tossing the football out of the water, running through the water over to the ladder, hopping out to toss the ball back into the water, only to do it all over again. And again. And again. 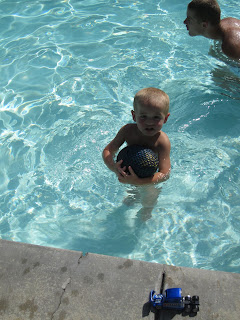 When that game got old Preston moved on to driving his cars along the ledge. Vrroooommm.
I couldn't believe how brave he'd gotten. He'd literally gone from being terrified to refusing to get out.
Preston also became a highroller. He enjoyed lunch ordered from the clubhouse down to the pool one day. I thought it was awesome. I'm sure Preston couldn't have cared less how cool he looked eating his lunch poolside. 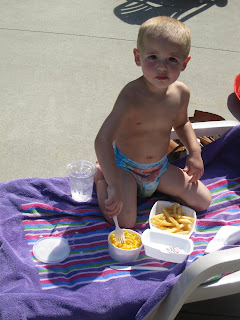 But all the fun wasn't had in the pool. There was also a golf cart. What good is having a condo on a golf course if you don't also have a golf cart to ride around in? Apparently that was my Grandpa's thought too, as he just recently purchased a golf cart for us to enjoy! 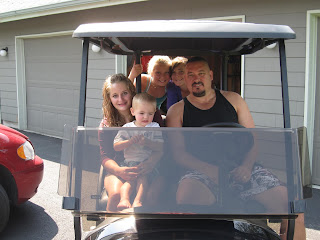 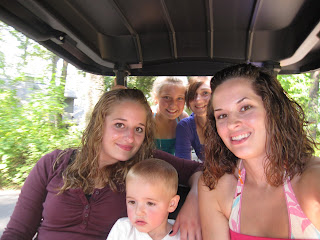 Preston thoroughly enjoyed this addition. He kept telling us he wanted to "ride goff cart". And ride we did. Preston even got to take it for a spin when we hit the patch of grass in front of the condo and he climbed on my lap and took the wheel. Let's just say it's a good thing, that he still has a while to practice. It was a little frightening. 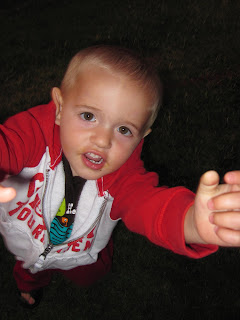 We also attended a family birthday up there this weekend. Preston got to recelebrate his birthday with the family that wasn't able to make his party, which also means that there were more presents to be opened.

Big present of the day was Preston's first remote control car. A remote control Escalade to be exact. We'd talked about remote control cars but had never purchased him one because we weren't sure he'd understand the concept. Oh, he was ready. More than ready in fact. He LOVED it. First toy he demanded we open and then the only toy he wanted to play with. 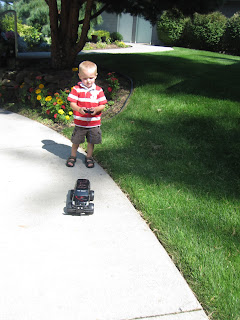 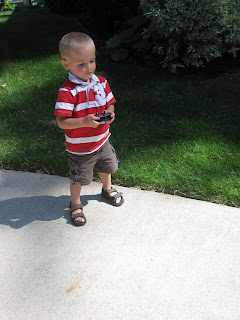 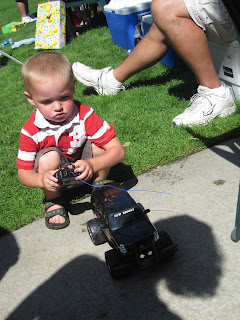 Preston also didn't want to share his new favorite toy. Can you blame him? I don't like to share my new toys either, so I let him get away with it. When one of his cousins got to close, Preston would pick it up and hold it tight. I explained that it was a new toy and a birthday present at that so Preston didn't have to share it right not. There are lots of other toys he shares (and shares well) and there will be lots of other days for them to see this one. But as it was brand new and he was so excited, he got a free pass. 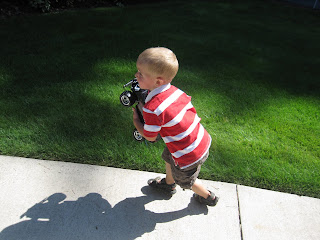 We plan on spending the rest of what might be left of summer ouside enjoying the sun. Wearing out our shorts and t-shirts until it's time for fall clothes.

Although I do love dressing for fall weather, so maybe it won't be so bad.

Oh my gosh, he is soooo adorable! And that lunch he was enjoying poolside? I'm craving it now! LOL!

What a busy busy little boy. I wish winter wasn't heading our way too! Fall is my favorite season but it always seems to end too quickly.

Enjoy the last few days of summer! I cannot believe how fast it went. I wanted to get some more swimming in before the end of the season but I don't think it's gonna happen.

The swimming pics of Preston are adorable! Now I'm looking forward to seeing him in his Halloween costume and playing in the snow. Do you get snow? I don't know where you live....

Looks like such a fun-filled time! Have a great week!