Way back in June when we were replacing the carpet in half of our house, I promised you all pictures. Then never showed you a single one. In my defense, it's hard to get a picture of a room in our house looking clean enough that I want to take a picture and show it to all of you. Not because our house is never clean because it is from time to time. But because as soon as I begin to show an interest in said room Preston seems to pick up on it and his two year old ways take over and the room is suddenly the center of mass destruction.

I am now, however, ready to show you one of those rooms. Preston's bedroom. You only get to see the one room right now because it's not only clean but it's also the only room in our house that is actually completely finished being updated. The paint is the color I want it to be. The trim looks good. The carpet is new. It's entirely decorated in a way that makes me want to smile and clap my hands.

Are you ready to meet Preston's bedroom? Alright, here we go!

As you enter Preston's bedroom... 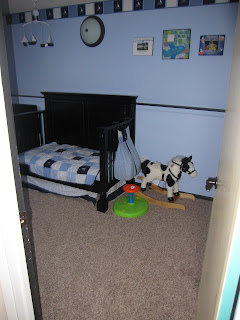 If you notice that sliver of green that somehow went unnoticed when I went through with the paint recently, that is the old color of the room. It was absolutely awful and bright and blinding. They'd even painted the trim. I'm going to have to pull the paint back out to remove all existance of it.
Back to Preston's room.
If you step inside and take a look to the left... 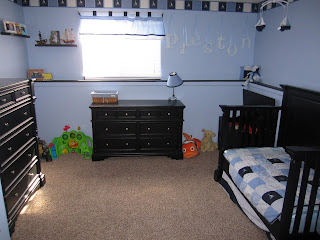 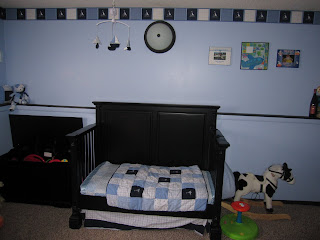 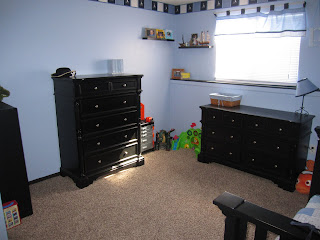 You may have noticed now that you are a few pictures in, but Preston's room colors are blue and black. The theme was the Nautica set at Babies R Us. I fell in love with it and had to have it as soon as I saw it. Luckily Brad felt the same way. I wasn't huge on the animal sets and really wanted something that I felt like Preston could grow with. Then Brad fell in love with the bedroom set while we were looking at bedroom themes. All of a sudden we had a complete nursery with a theme and furniture picked out.
Take a look to the right... 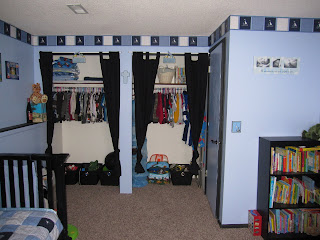 Preston's closet and bookcase. The closet doors were also that atrocious bright green color, so I had Brad pull them down. Plus they only allowed you to see half of each side of the closet at a time and I found that incredibly irritating. Instead I put up some curtains. They match the trim and the bedroom furniture so I think it really helps tie everything together.

Because I'm in love with it and it's fairly new to Preston's bedroom... 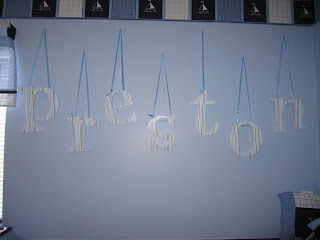 While shopping for my nephew's bedroom set we stumbled across these letters. Preston had just the wall space for them, so I was sold. Aren't they cute?! I just love putting Preston's name on everything! Maybe because I picked it out? I hope he likes his name when he gets older since I am just in love with it.
Did you notice the toys all over the place? This is just in Preston's bedroom. Between myself and Brad, my parents and siblings, and Brad's mom and sister things have gotten a bit out of hand. Preston not only has a bedroom filled with toys, but we also keep toys in the living room and we recently converted Brad's "theatre room" into a playroom. I think it's safe to say Preston has taken over our lives and our house

There you have it, our little boy's bedroom. A bedroom I should mention that he has never slept in. Where does Preston sleep you ask? In our bed in our bedroom. We just moved his crib into his room and converted it to a toddler bed after we'd put the new carpet in. It's not like he was sleeping in the crib anyways. That is our next project for this bedroom, getting Preston to sleep in it.
Hopefully I'll have more rooms to show you soon. We're slowly wrapping things up around here.

That is a REALLY nice bedroom!!! Love his name on the wall. :) I want to put my girls' names on everything too, but have to restrain myself. ;)

Love the room, great job! In Anna's old room, we did curtains for her closet too and it made a world of difference. That way I could see everything and I didn't have to worry about closing her little fingers in them! Anna also had her name hung up before she was even born. Early on, she knew how to spell her name because I always pointed out her letters, etc. So good work!

What a cute room. I think it will grow with him very well. Great job.

Fabulous room! I love that you took down the closet doors and replaced with curtains. Looks great.