Let me pick this story up where we left off.

Sunday morning arrived. Dreary and gray. The rain was off and on. It really didn't inspire any desire to accomplish a whole lot inside or outside. I was determined though. I put on a smile tried to muster up some energy and insisted that we head over to my parent's house to borrow my Dad's truck and then head to Home Depot to buy the trim for the kitchen, living room, and our bedroom.

I should have realized this was a bad idea when we got there and Brad informed me that we hadn't measured around the rooms, so we had no idea how much trim we needed. Fabulous. I was still determined. I refused to be swayed. We would just wing it. So to Home Depot we went.

Two hundred dollars later we were on our way home with our trim. Did we have enough? Maybe, maybe not. Did we have any desire to actually accomplish something? Nope. Not a single bit. But still we pressed on.

We had to head back to my parent's house to return the truck and here is where we made our mistake. Instead of dropping the truck off we went in. And stayed for lunch. And a couple episodes of River Monsters (strangely addicting). And watched a few movies. And spent the day lounging around doing a whole lot of nothing. I even got a pedicure from my sister Shannon. I guess that means I accomplished something, I got my toes painted.

Sunday was mostly a failure. Lazy and enjoyable, but a failure nonetheless. 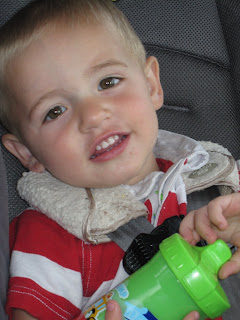 Fortunately there was still Monday. We could try to salvage our weekend and get something done.

Bright and early (well, when Preston woke up), I got started. I cleaned the kitchen, the living room, the the upstairs bathroom. They were sparkling. Kind of. I did have a two year old following me around.

Then Brad got up. I lost my motivation. Brad had no motivation. The day wasn't looking like it was going to be very productive.

Finally we got moving. We headed outside to do some garage cleaning. For some reason we never seem to be able to get the garage under control. Could have something to do with how much we keep in there. Both of our cars, Brad's streetbike and his dirtbike, tools, household/yard things, and the big one; Preston's outgrown stuff. Preston's stuff is slowly taking over. And by slowly I mean pretty quickly. After all he's only two. When I start to think about how much stuff he's going to accumulate by the time he's eighteen, I start to enter a full blown panic. Don't even get me started on how much more a second child would add to this collection. Our plan is to buy a shed next summer, so that we can move our stuff into the shed and Preston's stuff can be moved around the garage to create more "space".

When the garage was finally cleaned up enough, Brad got started on the real work. Measuring and cutting the trim. I went inside with our now wet and not listening child and accomplished a few more things around the house. I managed to get all of the laundry caught up and all of the paperwork in my office sorted through and filed away. Not a small task. Brad finished up the trim for the kitchen and dining room.

We called it a day.

Monday we accomplished a lot more. Thank goodness. It was starting to get pretty pathetic there for a minute.