Preston Peed In The Potty!

I briefly mentioned before...but Preston peed in the potty.

This is still a one time only deal so far. But still we were pretty excited! As was Preston!

On Saturday last week, I went in to use the bathroom, Preston of course insisted not only on coming with me but also that he must sit on his little toliet too. I obliged. Thinking that at least he wanted to sit on it.

He was still sitting there when I finished peeing in my toliet, so I headed out of the bathroom to grab stuff for my shower from the bedroom. Moments later Preston comes racing out, telling me "pee-pee, pee-pee". I tell Preston that if he needs to go pee-pee he should go sit on his toliet and he grabs my hand and drags me to the bathroom. I figured he'd just decided he needed me in there with him while he sat on the toliet. Until he points to his toliet and says, "pee-pee". Sure enough I look in there and he peed! 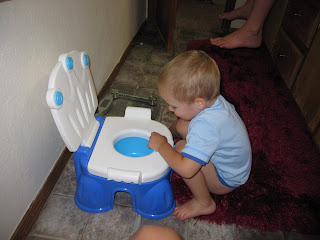 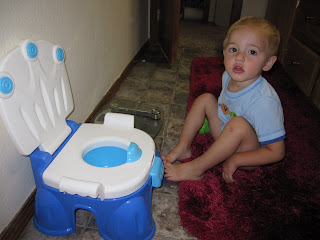 I was so excited! Thus begins the pictures! I call Brad in to check it out. Brad praises Preston for a job well done. Preston is thrilled with how proud of him we are. We shoot a little video about what happened. I was putting off emptying his little toliet full of pee-pee for as long as possible because I was a little bit concerned with how that would go, since he was so excited about peeing in the toliet and I'm just going to dump it out?! But I couldn't just leave it. So I dump it, we flush the big toliet, and go about the rest of our day.

Preston still hasn't peed on his toliet since. Although today while we were outside after swimming, he looked at me and said, "pee-pee". So I figured what the hell, and told him that if he had to go pee-pee to go ahead and go. He took this very seriously, and grunted and made a big show of it and he went! I was so excited! He was pretty excited too! He kept pointing where he'd peed and saying, "pee-pee, pee-pee".

Now I'm rethinking my last thought on how ready he is. But I still think we're going to hold off on serious potty training for a few more months. I want both of us to be a little more ready before we go at this full force. Although when I show him his new Thomas the Train under-roos he might change his mind! One can dream right?!

Updated: Little Miss Lazy Blogger over here keeps on leaving posts in the draft folder and refuses to rewrite a whole post to add a few updates. So now you get stuck with my "Update" at the end. I'm sorry!! Really I am! I promise to do better! Now on with the update.

Yay for peeing in the potty! Has he mastered the poop yet?? LOL

Just a thought :)
According to some potty training book I read children have "peak bathroom time" which is while they're eating, before bathes and well obviously I didn't read it. You've met my son who pees and poops all over the place and he's three! lol Good luck! Joe has thomas underoos too! :)

I started sending Ellis in to try EVERY time I changed his diaper. Rather, he started demanding that he had to try. it took a few weeks before he learned how to control his bladder muscle. still working on poop. that always seems to take forever with boys!