One Sucker and New Train Later...

With a two year birthday comes a two year check up. So off to our pediatrician we went. 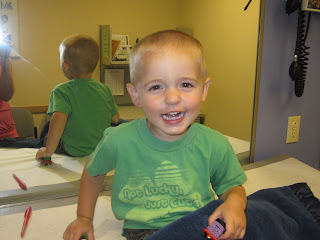 Preston, the big boy that he is was topping the charts. He weighed 28.5 pounds, falling into the 57th percenile. And my tall little boy was 37 inches, which put him into the 97th percentile! Can you believe it? He's getting so big!
Of course, Preston's two year check up included a shot. The upside of that is that it's last shot he has to get until kindergarten, with the exception of the flu shot.
Poor Preston was rewarded for being so brave at the Dr's office with a sucker at the bank and a new train too. I think he might have decided it was worth it!