Since our last two days in Seattle were somewhat uneventful and I didn't pull the camera out as often as I did the first few days, I'll just go right ahead and combine them for you. I'm doing this for you. Not because I am just too darn lazy to write two more posts about our vacation last week when I can just write one. Your welcome.
On Thursday after Preston woke up, early I might add, I attempted to stumble out of bed and get showered and dressed. Which wasn't working out so well for me having stayed up so late the night before. Finally I was awake enough to get excited. Why you ask? I was going to Ikea! For the first time ever! I'd heard such great things about Ikea, but I had my doubts. How amazing could it really be? I was going to find out.
Unfortunately I made the mistake of telling Preston when we were leaving for Ikea that we were going to Chuck E Cheese...that night. Now Preston knows exactly what Chuck E Cheese is. So he spent the whole car ride to Ikea alternating between almost falling asleep and telling me we were going to "Cheese". And when we arrived at Ikea, as I unbuckled him he smiled at me and excitedly informed me "Cheese!".
I'm sure you can imagine the shopping trip that followed. Preston was not very thrilled when we walked into Ikea instead of Chuck E Cheese. And he was not afraid to let me know! I rushed through Ikea, somehow still managing to spend a couple hundred dollars. That place is amazing! I well in love with so many things and am already planning a trip back in the Spring. I think it's safe to say that I am pretty grateful that Preston was in a hurry to get out of there or at least that my checking account was grateful.
Although at the end when we did the self checkout with the little scanner, Preston was in his element. I let him scan all of our purchases and then I couldn't get him to leave. I should've bought more, so that Preston could have played with the scanner longer. Except that once again, Preston wants to go to college one day and I'm sure he'd be less than thrilled that I spent all of that money at Ikea when he was two so that he could play with the scanner just a little bit longer.
From there we went to Target, where we had lunch. I not only love Target but also their Cafe. It is so good! More and more often lately I am finding myself putting off my trip to Target until lunch time just so we can eat there. And Target did not disappoint. In fact I think Preston was pretty happy about this trip to Target. To convinve him to sit nicely in the basket I promised him a toy. We ended up in the car aisle, where Preston fell in love with a Lightning McQueen, complete with Mac the semi truck and trailer. After seeing that it was only $10, I figured it was worth it and told him to sit down and he could have it. Upon checking my receipt in the car, after opening the package and handing Preston the toy so that he could really fall in love, I saw that I'd just paid $20 for a toy just to get Preston to sit in the cart. I'd been had. I'm feeling a little better about it a week later though, since Preston has been playing with it daily and really loves the whole thing. But still $20 just to sit in the cart, ugh!
One nap later, Jen came home from work and we were all off to Chuck E Cheese. This time for real. Preston was excited! Jen, I'm pretty sure was a little nervous. She had never been to Chuck E Cheese, other than a quick pop in to say happy birthday a few years back. Definitely not with the intent to stay and play a while.
It was loud, it was busy, it was bright, and there were games. Preston loved it. He raced around exploring a new Chuck E Cheese. Checking out the rides, taking a few pictures, and working on his athletic skills. Of course Preston was way too busy to actually stop and eat. Heaven forbid. I really think that the only reason they serve food there is because the parents eat it. What kid really walks into a room full of games and thinks "Hmmm, I'm kind of hungry?". Not mine. 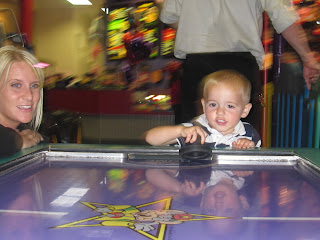 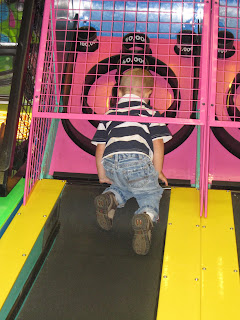 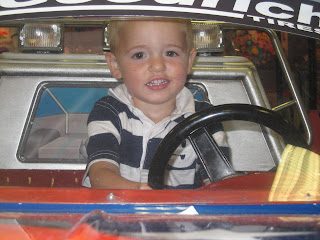 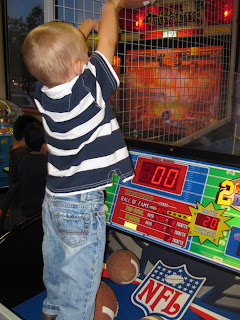 Two hours later, we were done. I was exhausted, Jen was exhausted, and Preston was begging to stay.
Bright and early Friday morning, we were up and getting ready to leave. It was a good thing too. Preston woke up that morning, looked at me very seriously, and said, "Mama...Dada, meows?" I think he missed home.
He then got a little bit of energy out keeping tabs on Jen while she got ready for work. He'd run over when she came out of the bathroom, point to her, and yell, "Jen!" When she walked back into the bathroom, Preston came back to me and asked, "Mama, Jen go?". Only to have her come back out and him race over to point and yell, "JEN!". I think he's going to miss his Aunt Jen.
The ride home went as well as the ride there. Once again Preston napped. I was so excited. I'm thinking that we might just start hopping in the car everyday around 1:45pm and see what happens. Which would be awesome, except that I'd have to drive around for a while before he'd fall asleep and I can think of better ways to spend money than on gas to get Preston to maybe nap.
Preston was thrilled when he woke up and we were home. Even more thrilled when he realized that both Daddy and the cats were there too.
There's our vacation! I'm dying to go back to Seattle. But love being home. Anyone having any solutions to that problem?

Just stopping by from SITS.

You are your family are beautiful!
Steph (from SITS)

Sounds like an awesome vacation! I've always wanted to go to Seattle but haven't quite made it there! I hope to get there one day, eventually.

Your blog is adorable! I love it! And your posts are written really well, and I will definitely be back to see more!

Angela from Angela's Soliloquy
We SITS have to stick together! :)

Stopped by from SITS to say hi! Looks like you guys had a blast. And, I learned that we have somethings in common: I LOVE purses, and TV, too:)!

We have the $20 mac truck too... I got it last summer as a bribe on the airplane for Harry!! LOL And he does STILL play with it, so I don't consider it a waste. :)

I want to go to Ikeia I havent been in soo long..

Your blog is adorable! I love it! And your posts are written really well
Domain registration india