On day three Preston and I headed over to Westlake Center. Otherwise known as the place that was trying to find a way to make me broke. It is a HUGE shopping center in downtown Seattle. Everywhere I turned there was a new store that I could spend money in. It was fabulous. You know or not so much.
I got in quite the workout this day. First we walked the 10-15 blocks to get to the Monorail. Preston, you might remember, is obsessed with trains these days. And I do mean obsessed. So we were going to ride the big train, no matter what. We arrive and Preston was oh so excited. He's pointing out the "choo-choo" to me. Announcing "choo-choo track" to me every few seconds. Oh yeah, he was excited.
We get on the train, I pull Preston out of his stroller so he can sit next to me like a big boy, and away we go. The Monorail is fast. And Preston loved every minute of it. He just sat there staring out the windows in awe. 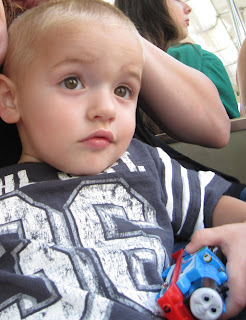 As we got off the train, Preston was informing me "more, more". Unfortunately for him we had some shopping to do!
After buying Preston, Brad, myself, and my future nephew something (Did I forget to mention that my sister is having a BOY?!), I decided it was time to stop shopping. Give the bank account a break. Preston would like to go to college you know.
We did a little walk through of Pike Place, checked out the view of the water, and saw the sign for the aquarium. I figured it was worth a second try, Preston did not do so well at the aquarium a few months back. And worst case at least we got to walk the boardwalk. So we made the long trek down from Pike Place to the Seattle Aquarium.
I let Preston out of the stroller to stretch his legs on the pier next to the aquarium. He pointed out a tire floating in the water. It went a little something like this, "Mama, car, oh-no". He was very concerned. We took a few pictures. Loaded back up and headed in to to see the fish. 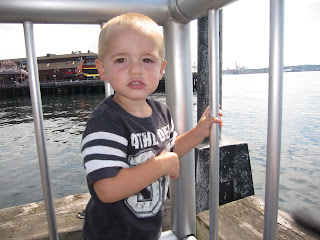 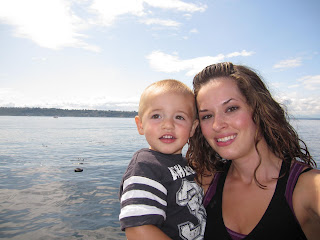 Preston really seemed to enjoy the aquarium this time. He couldn't get enough of all the fish everywhere. Everytime he turned he was announcing more and more "fishies" to me. And he LOVED the Finding Nemo tank. Seriously they took a Nemo fish and a Dory fish and tossed them into the same tank! Preston could have stood there for hours watching "Memo" swim around. 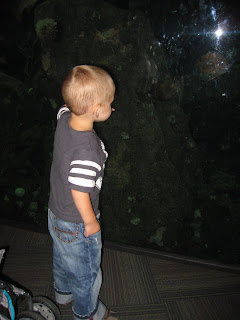 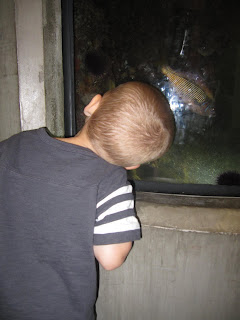 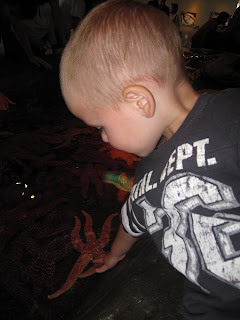 We also got to see seals and sea otters. We were there for the seals feeding time which was pretty awesome. At least I thought so, Preston wasn't all that interested. Although in this picture it sure looks like he was. I swear moments after this picture was taken he split. 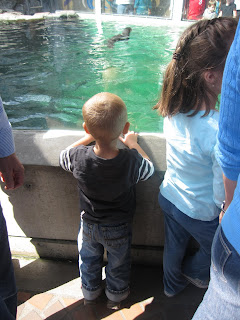 After getting our fill of all that could be seen at the aquarium, we started the hike back. And I do mean hike. I had to make it back up that same hill that Courtney and I struggled with back in June. This time I was at least able to prepare myself mentally. It was tough. Didn't help that the stroller was not only loaded down with Preston but also ALL of our purchases from the day. Nice. I could definitely feel the burn.
The plan was to take the Monorail back to the Seattle Center and let Preston ride a few more of the rides he enjoyed the day before. About half way back to the Monorail I realized that I was only about 3 blocks away from Jen's apartment. But I was about to hop on the Monorail and end up 10-15 blocks away. So I did what Preston wanted, and hopped on the Monorail. He loved it just as much the second time as he did the first.
We checked out more of the rides. This time Preston's clear favorite was the little cars. He rode them twice. First and last. But he did check out the rollercoaster again and also the ferris wheel (Never again! He wouldn't sit still and I was a nervous wreck!) and a little boat that swung back and forth. And all too soon the tickets were gone and it was time to head back to meet Aunt Jen. 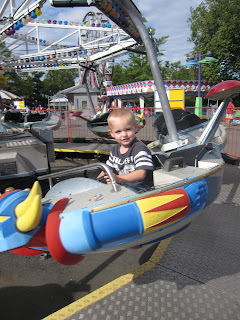 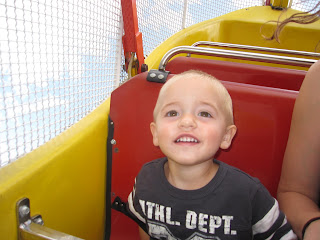 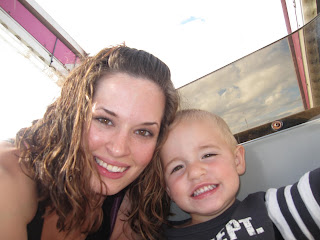 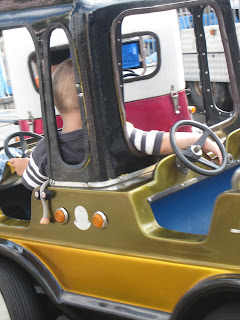 About half way back I was regretting getting back on the Monorail. Just knowing that I'd more than doubled my walk was enough to make me curse myself. I basically just collapsed when we arrived back at Jen's. Preston on the other hand was bouncing off the walls. Luckily the plan for the night was to stay in and have dinner there. Thank goodness, I had no energy for anything other than that!
Somehow though I did find just enough energy to have a couple of glasses of wine with Jen after Preston fell asleep and stay up talking until 1:30AM! What?! How?! I guess time truly does fly when you're enjoying yourself! I fell asleep hoping, wishing, praying, and crossing fingers that Preston would sleep in on Thursday!

Visiting your blog for the first time from SITS. Your son is adorable! I look forward to reading more.

Popping in from SITS to say hello! And I would say dream of Edward, however have you seen the latest preview on MSN with all the Jacob in it? It makes my decision a little more hard! hehe

Your son is absolutely adorable and sounds like you had quite the eventful and exhausting day!

I'm going to follow you as well! I love reading people's adventures!

Have a wonderful day!

I love the pics of you and Preston. They are so cute. You have one good looking boy there!

And I think it is adorable how little boys all seem to go through an obsession with trains phase. My 3 year old nephew is going through it right now and everything always has to do with a "big choo-choo."

I cant believe you did that hill again!! Didnt you learn yoru lesson the first time? That thing almost killed me.

Aquariums rock! My kids love them.

Those are some great pictures. Did he sleep in?

Preston is such a handsome boy! I love how he reacted to the "tire in the water".