One week ago today, my baby was turning TWO and I was running around trying to get everything ready for his party that afternoon.
We had much to do and a birthday to celebrate. Next year I have learned a few things. First, we won't do the party on Preston's actual birthday. I felt like instead of having a special day to celebrate with him we were running around trying to get everything ready for his party. I know that Preston had fun picking up the balloons and going to the petstore for goldfish, but I still felt a little bit sad that we were spending part of his birthday running errands. Second, next year we are going to do a friend party and a family party seperately. I felt like I was running around trying to keep everything going at the party and make sure everyone knew how happy I was that they came that I didn't get to sit down and just enjoy that it was Preston's second birthday. It's hard when you have family, before-kids-friends, and after-kids-friends all in the same place at once and you're trying to have a conversation with everyone. Third, and finally, take more pictures! I said this last year too. I think I took a few more this year, but I still don't feel like I got enough.
Now on to the actual party!
Since the party was late in the afternoon and we were bbq dinner, I picked Preston up a very special birthday lunch of grilled cheese and french fries from Red Robin. The lunch itself wasn't the special part it was just that Red Robin is Preston's favorite restaurant and grilled cheese and french fries from them is the one meal Preston will never pass up!
While he ate and watched Finding Nemo, in honor of his party, I finished setting things up before people started to arrive.
The party this year was much smaller than the party last year, and for that I was thankful this year since I was already feeling overwhelmed.
Here is the cake table and the party favors table. Notice that the bottom right hand corner of the cake doesn't look just right? Preston got to it while we were moving a table outside. He didn't like that his turtle was stuck to it, so he pulled it off. Then upon noticing the bottom of the turtle was covered in icing, he went back for a few extra dips. We walked in to him licking the good stuff off the turtle! Those goldfish in the tank in the back were part of the party favors. Each child got to take one home and empty out their party "bowl" and put their new pet in it. Finding Nemo was our theme, after all. 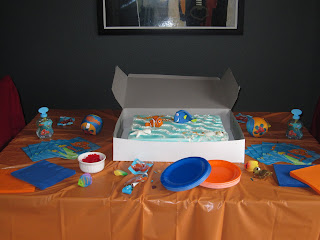 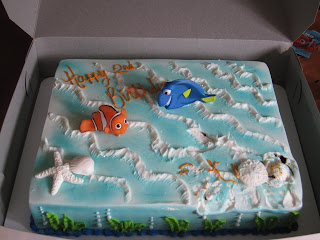 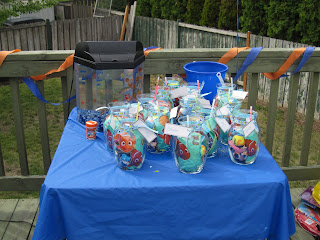 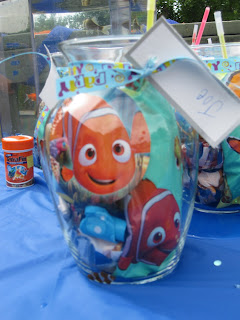 Preston's birthday present. Brad let him have it a day early since that was when he finished putting it together and we wanted to see how much Preston liked it! I think it's safe to say that he loved it! 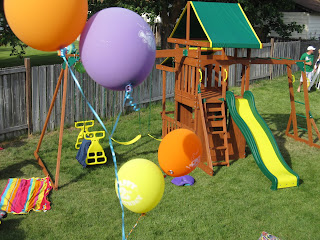 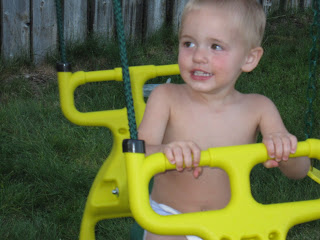 The birthday boy! I have had a personalized sign with his birthday theme made for both this birthday and his first. I'm thinking that I'll keep getting one made every year, just because I think they're cute! What we're going to do with a bunch of banners that announce how old Preston turned that year and what the party theme was, I'm not really sure. 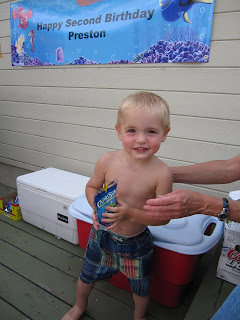 Present time. Preston was not interested in opening presents at all. He would come over and grab the ones that he really wanted and bring them to Brad to open. But other than that the task was left up to me. I also became incredibly overwhelmed by the kids who were interested in opening presents. They swarmed me. And I'm one of those weirdos who likes to see who a present is from and what they got Preston, so it was not the highlight of the party for me. Although I'm sure it was for them. 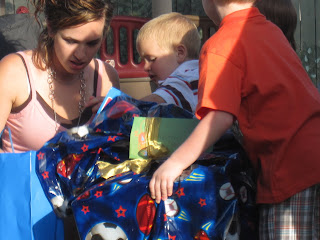 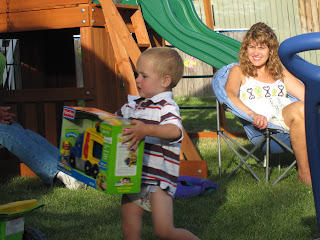 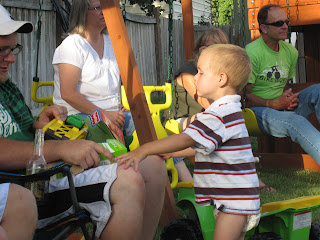 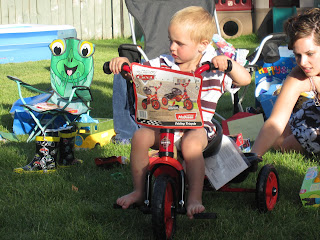 Another lowpoint of the party for me was Brad breaking one of our front windows. It was technically an accident but it really didn't put me in a great mood for the rest of the party.
And then it was time to make a wish and blow out his candles...Make a Wish Baby! 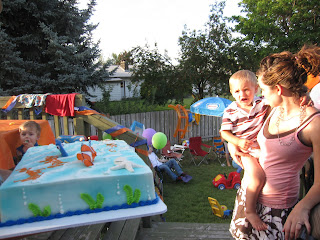 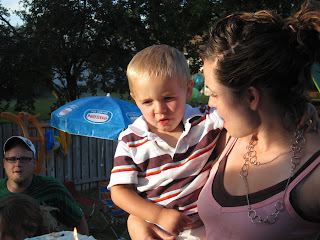 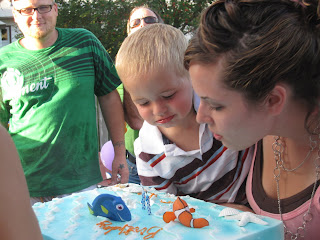 Now I get to sit back and relax for a couple of month until it's time to start thinking about birthday ideas for next year. 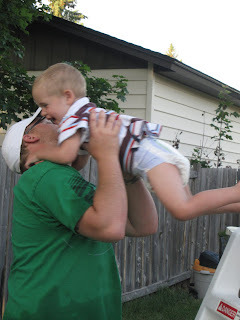 yay looks like so much fun too bad we didnt live over there anymore I would of been there in a heartbeat! On a side note I have discussed how I feel about his new gf and he doesnt care hes like well I dont care if you have new guys around boone so..and I'm like really...but all he says is she isnt going to try and and take your spot as mom dont worry...well geesh thanks for that relief right.,,

Didn't Preston get a climber toy thing last year for his birthday? What are you guys going to do with 2?

Stopping by from SITS...it looks like he had a pretty good birthday party! The cake is really cute!