Now that I finally feel mildly recovered from the whirlwind that was my three day vacation last week, I'm ready to tell you all about it. With pictures of course. Is there any better way to tell about a vacation? No, I didn't think so either.

We headed out of Spokane on Monday morning. It was actually closer to Monday afternoon, but I'm sure that doesn't actually tell anything of great importance and I would hate for you to think that I am late for everything, including starting my vacation. After loading up Zeke and Courtney we were on our way. 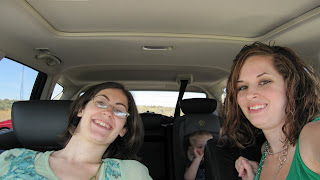 A lunch pitstop at Zips to refuel our bellies and also let the boys out to play and stretch their legs, not to mention a diaper change. While we were there Preston kept racing over to those quarter machines. He desperately wanted one of those large bouncy balls. Being a parent who isn't afraid to bribe him, everytime he went over there I told him if he ate his lunch I would get him one before we left. Luckily for Preston he didn't have to wait that long. A very nice man had watched this exchange and seen Preston's major desire to obtain one of those bouncy balls and purchased one for him. I turned in my seat to see Preston's holding a ball and turned around to see the man smiling. Preston was beyond thrilled about not only getting to eat his lunch but also play with his new ball. Isn't the kindness of strangers amazing sometimes?
Moving on we checked into our hotel. The drive was not bad at all. And we arrived much sooner than I'd expected given our late departure and stop for lunch. The boys both did great in the car. Not a single meltdown in sight. Which is pretty lucky with them both being one and all. Preston is a great traveller, which makes me happy from the very bottom of my heart since Mommy loves to travel! Pop in a movie in his DVD player and he's good to go. 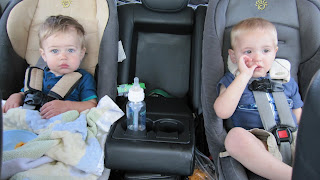 We were invited to a dinner bbq at my sister-in-law Jen's boyfriend's house. So of we went. I was so excited not only to meet him but also that Preston and Zeke would be able to get some of that pent up car ride energy out of their systems before we headed back to the hotel for bedtime. 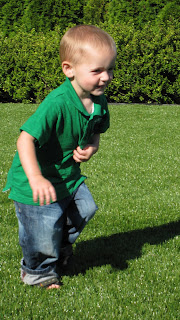 And oh, the house. The view. Be still my beating heart. It was absolutely gorgeous. Not to mention the boyfriend was definitely a keeper. Very social and friendly and more than willing to tag along when Preston grabbed his hand to drag him from spot to spot. He also had a daugher who was not only instantly nice and acted like we'd known each other longer than a few hours but adorable and sweet. She was even willing to let Preston get to know her new kitten even though he's not always the most gentle with cats. We also headed to a park down the street where Preston dazzled Aunt Jen with his slide skills and even raced her down a few times. By the time we left both boys were exhausted and more than ready for a night in a hotel. 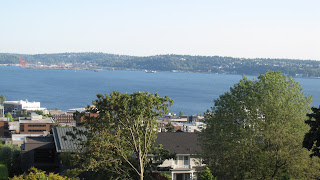 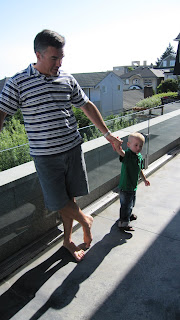 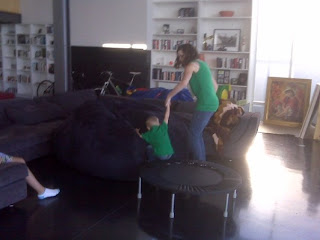 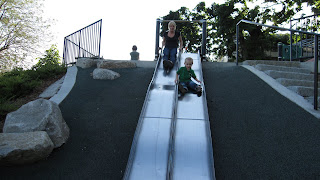 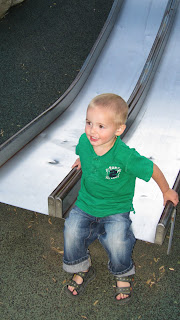 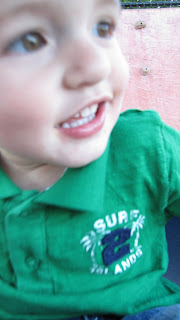 Tuesday we hit up the zoo. I had been desperate to get back to the zoo after only seeing half of it when we visited Seattle in March. Now was the time. I was also a teensy bit afraid. Last time Preston threw the temper tantrum to end all temper tantrums. It was bad. It lasted for well over 45 minutes and at one point involved both Brad and me strapping him into the stroller. This time Preston was an angel. It was shocking what a difference taking him now was versus taking him a few months ago. He sat in his stroller like such a big boy and would even climb back in when I'd pull him out for walk through exhibits or to give him a better view. He couldn't have down any better than he did. 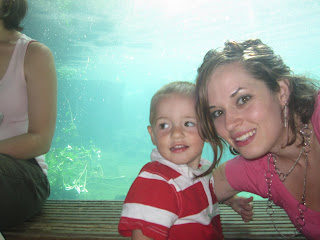 Favorites for Preston at the zoo were the hippos and flamingos. I'm not sure if it was the animal or simply because he liked saying both hippo and flamingo. Either way we stood at those exhibits a little longer than the others. 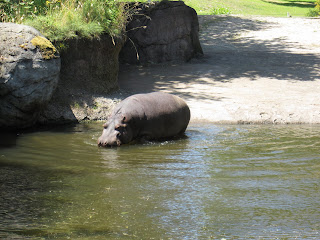 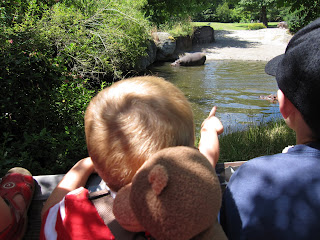 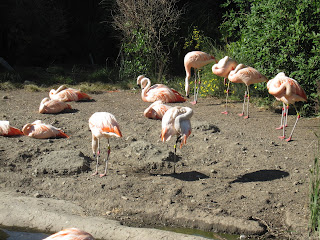 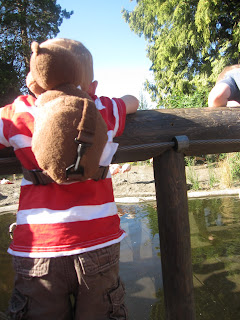 This time we were able to make it through the entire zoo. Largely in part I'm sure to the fact that we left around one'o'clock. Zeke was over an hour past his naptime and informing us of that fact. So we headed back to the hotel and right before we got there realized that not only was Zeke sleeping but so was Preston, who hasn't napped at one'o'clock in I don't even know how long. Oh wait, that's a lie. The last time Preston fell asleep for a normal nap was after a playdate at Courtney and Zeke's house a few weeks ago. Hmmm, maybe we're on to something here. 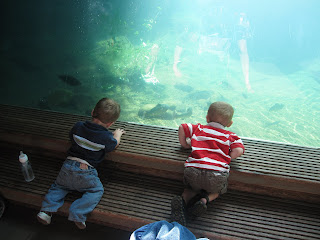 Both boys napping allowed me and Courtney to pick up some lunch, catch a break, feed the boys, and get back to the zoo in time to feed the giraffes. Oh yes, you read that right. We fed the giraffes. It was awesome. Preston was so excited to get to see the giraffes up close and personal since they are another one of his very favorite zoo animals. 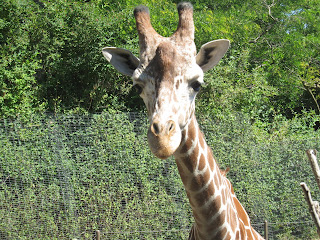 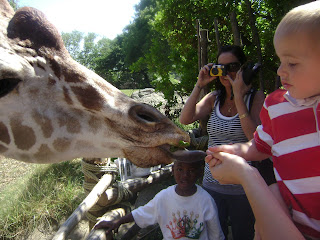 After the giraffes it was time for us to get a snack. The zoo had some of my favorite ice cream. Which somehow seems to be one of Preston's favorites too, since he traded me his popsicle for my ice cream cone. Which resulted in me buying myself a new one. Preston ate that one too, since I thought I'd lost my camera and we were backtracking trying to find it and when he wanted to trade my new cone for his more than half gone old one, I did without even thinking. I was freaking out about the loss of my not even two weeks old camera. Don't worry though it ended up being in my stroller under my wallet. So the only thing I lost that day was both my ice cream cones to my one year old scam artist. Who made quite the mess, which I obviously snapped with my very not lost camera. 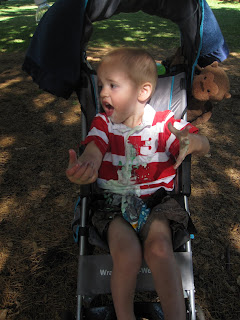 Preston also had a blast in the bird room at the zoo. For the price of a dollar I was able to purchase him a feed stick and let him go to town feeding all the birds. He loved it. Even more so when one of the birds landed on his popsicle stick of bird food and he got to get even more up close and personal with the birds. 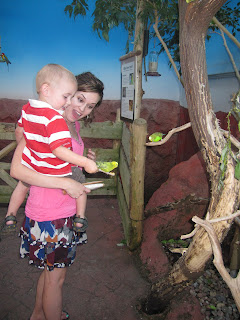 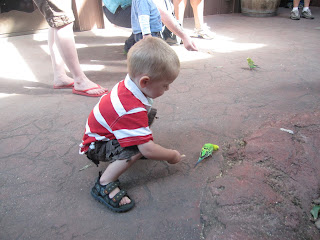 I also got to see the Ocelots this time! I was so excited. They are every bit as cute as I'd pictured them. I had to drag myself away from their exhibit since Preston still wanted to continue on with rest of the zoo. Strange how that happened. 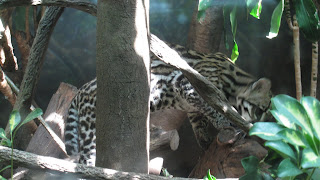 We finished up the rest of the zoo and headed back to the hotel. That's right another trip back. We were so grateful we paid a little extra for the room downtown since we made so many trips back throughout the day. The boys were both in desperate need of a bath after our day at the zoo and the ice creams they both enjoyed. Or better yet the ice cream that they didn't enjoy because it ended up all over their clothes and bodies.
The day ended with dinner at one of Preston's favorite restaurants, Red Robin. We ate on the pier so Preston also enjoyed the walk into the restaurant and all the water surrounding us. I was pleasantly surprised to see that Preston was willing to sit in his high chair through our entire meal without any naughty behavior. As well as eat all of dinner and then some. Somebody must have gotten a little hungry after our busy day. 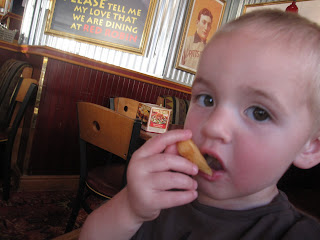 After another great night's sleep in our hotel, we were more than ready to greet the day on Wednesday. What we weren't ready to do was head back home. There was so much more to see and do. Which is exactly why we will be going back later this summer. I just hope Jen is ready for us!
We made a trip down to Pike Place Market after checking out of our hotel. Courtney and I both wanted flowers and I thought Preston would enjoy the people and action. One thing I did not think of? Parking at the top of a hill. Sure it all seems nice when your strolling down the hill with your strollers. But that hike back up? Not so much. It was horrible. I was out of breath and sweating by the time we reached the top. My legs were jello. I was ready to throw in the towel. Luckily when I looked next to me Courtney felt the same. Misery does love company. It sure didn't help that he man walking up next to us couldn't hide his giggles at our very obvious struggle with this Mt Everest like hill. 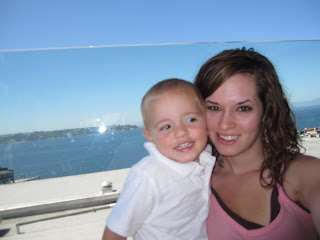 Once we'd caught our breath we were off to our last stop before heading home. The Children's Museum.
It did not disappoint. It was huge and there was more than enough to keep us entertained for the two hours that we were there. In fact we could have been there longer if we'd had the time. Preston was able to do some grocery shopping, explore the great outdoors, play with mechanical water toys, drive a fire truck, and so much more. He had a blast and was dragged out in his stroller protesting the fact that it was time to eat and head home. 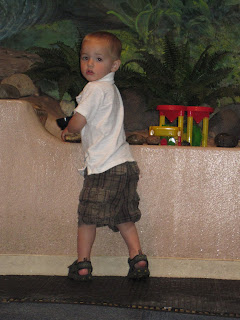 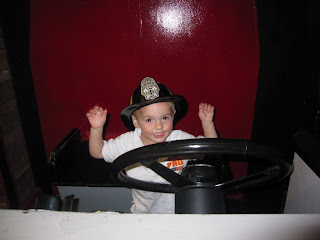 Both boys napped at least half of the ride home. Apparently the day had worn them out. Courtney and I were able to chat in the peace of a car ride that invloves sleeping children. And when they woke up they were able to entertain each other. Or at least Preston was able to entertain Zeke, which in turn entertained Preston. The game went a little like this. Preston dumps a handful of goldfish crackers on the consul between the two of them and then...wait for it...smashes all them with his fist. The goldfish crackers go flying and Zeke laughs hysterically. Good times, good times. Sure makes me glad that I drove in my car.
All in all it was a great trip! We had a great time. And found perfect travel companions. Thanks for coming with us guys! It was a blast!

What a great post. It sounds like a wonderful trip. I love the part about the stranger buying the bouncy ball. It is little things like that which sometimes restore my faith in the world.