Where to begin... Our weekend was so busy. We have been on a bit of a time crunch to get everything done by Preston's birthday party. With Brad working so much that is much more difficult. Not to mention trying to find a happy balance of finishing things up and enjoying the relaxation that is a requirement of a three day weekend.

We attempted to put in a mowline in our backyard on Friday. But the 90 degree heat quickly changed our plans. Which meant a grand total of not a whole lot actually got accomplished.
On a sour note the bedroom furniture that we'd ordered was to put it nicely crap. So it needs to be returned. It arrived with chips and in teeny tiny boxes meaning everything had to be put together. A royal pain. And disappointment. So we spent the day trolling furniture stores trying to find it's replacement. Did you know that nice bedroom furniture is also expensive bedroom furniture? I came to the realization that we will either be buying our set in pieces or saving up the difference from the crappy furniture price to the nice furniture price. Either way I left disappointed that we couldn't just buy what I wanted. Responsible spending, blah.
On Saturday, the FOURTH!, we headed over to bbq at my mother-in-law, Tammy's house. We arrived with Preston's splash pad and planned on staying for a couple of hours and then heading over to Couer D'Alene for the fireworks show. Preston was having such a blast playing in the water with everyone that we ended up staying a little longer than we'd planned. 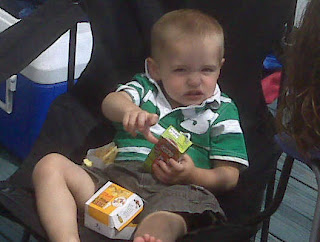 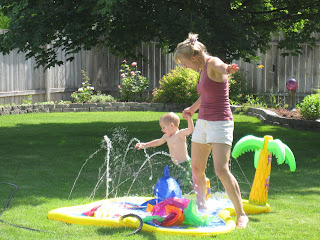 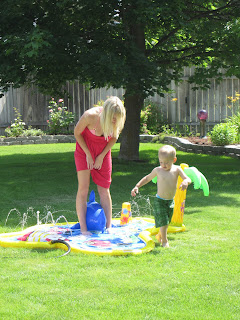 A little longer turned into Preston chasing all of us around the yard with the hose. Which wore him out enough that he climbed into my lap to cuddle and rest. Where he would have stayed if I hadn't gotten a massive craving for pizza. He ended up in Brad's lap and when I arrived back with pizza and french fries, Preston was out. It was 7:30pm and we'd already abanoned the idea of CDA for downtown. That was noW out. I had hopes that Preston was down for the night, so I had no intentions of waking him for fireworks at 10pm. Preston slept through the two movies that we watched there and woke up bright and cheery at eleven that night. He was up until 2am at home. It was a long night to say the least. These late naps are rough on all of us. 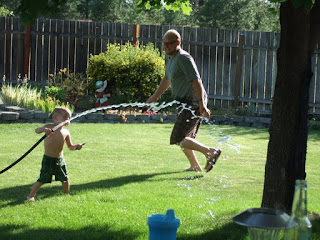 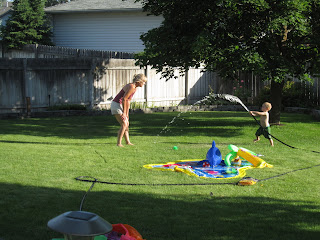 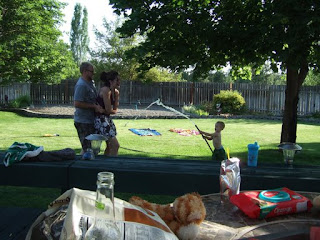 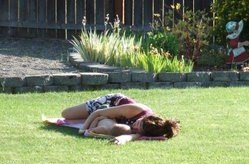 Sunday we bbq'd at our house with Brad's family. We were attempting to put in our new pool liner so that we could start swimming this week. Everything was going great up until Tammy and Dave left. Leaving only me and Brad to finish up what we thought was just filling the pool and sticking the ladder in. In less than fifteen minutes of them leaving one side collapsed and the whole process ended because we had to start over. Only that will have to wait until next weekend because we also had to wait for the sand under it to dry and it was eight that night by the time we got all the water out of the liner. Ugh. Double ugh. I was so looking forward to swimming this week. Pool party anyone? We will be putting it in this weekend, no matter what. If you'd like to be invited over to swim we are taking offers of help. Just sayin'.
While we worked on the liner we also enjoyed breaks for food and fun. Preston once again ended up with the hose and once again abused the priviledge. Not a single person at our house left without being sprayed at least once. Preston also loved putting in the liner. He's small enough that we were able to lift him up and over while Brad was inside the slowly filling pool. Where yet another hose was located. I'm sure you get the picture. 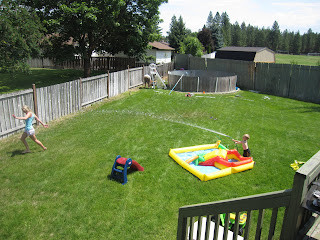 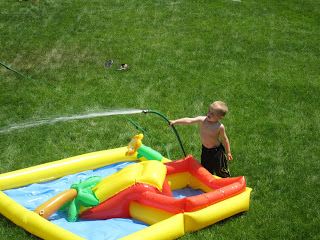 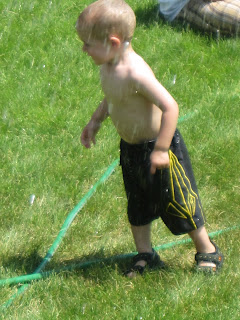 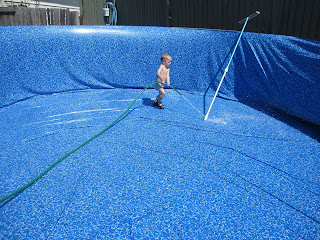 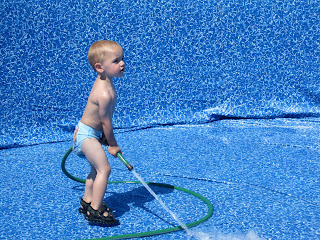 I just love long weekends, don't you? How'd you spend yours?

Visiting from SITS. Loved the pictures. It sounds like it was a fun weekend for you, but I wouldn't want to be awake at 1am. My parents used to keep my brother and I up on purpose during the day so we'd sleep through the night when we were little. Cute pictures, especially the last one.

Looks like a fun weekend was had by all!