Actually just one of us was hit. Preston. 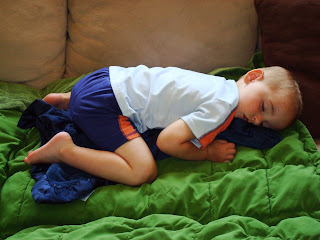 I hate when my baby is sick. It's sad and upsetting. Not to mention exhausting. For both of us.
He started running a fever right before bedtime last night, but the tylenol helped him sleep until around 4am when he woke up tossing and turning only to be dosed again.
I'd hoped all was well with the world when he woke up all cheerful this morning, only to realize when he came crawling to cuddle with me on the couch that the tylenol had worn off and the fever returned.
So we spent our day dosing with tylenol and sitting on either the couches or bed watching movies and cartoons. There was a lot of cuddling to say the least. It's the only good thing that comes out of Preston being sick. Especially since Preston gets sick like I do. By that I mean whiny and overly dramatic about how horrible and difficult life is. I have a new respect for my Mom being so nice to me over the years and the many times that I played the sick card.
Preston has even learned to manipulate while he is sick. Which is how he ended up eating a bagel, chips, and two otter pops for dinner. He refused everything else and then started crying. What was I supposed to do? He already didn't feel good. I caved.
Here's to hoping that tomorrow brings a new day and one that's fever free.

We've been sick too now my son has it the worst and I'm getting better.
My theory is let have whatever they want (within reason) when they are sick it's about the only time you get to see them happy and you get a lil break.
Stopping by from SITS

I agree all bets are off when one is sick. The boys get to watch 24 hours of PBS and eat popscicles or whatever else they will eat.

I hope the exhaustion wears off soon. My advice would be plan a date night with your hubs or coffee with the girls. You need a break after playing nurse maid!

BTW popped by from SITS!

Aidan Baidan's been sick too! I hope Preston starts feeling better, it's no fun when they mope around all day. At least Preston cuddles, Aidan just plays the "up-down" game while crying. He wants in my lap then back down 2 seconds later. UGH!

Saw your comments on SITS ;)

I totally understand. My baby is down with a bad cough and fever, and it is bone-achingly tiring!!!

All the best to ya!

I hope he gets better soon!