Somebody Is Moving Up In The World

It started with me caving. Brad had been begging. No really, begging. Asking all the time, only to have me finding more and more pointless excuses. So finally I just agreed.

Agreed to what you ask?
Preston's crib has now been converted into the toddler bed. 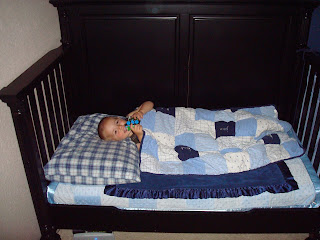 Isn't it cute?
Preston loves it. Loves it unfortunately does not mean that he's actually sleeping in it. Not that he was sleeping in the crib before it anyways. Preston currently resides in our bed during naps and bedtime these days. On the days when naps actually happen that is.
But Preston does get all excited and loves to climb in it and tell me "na-ni" and lay down. Only to be back up seconds later. He's even taken to jumping on it. My toddler now jumps on his bed. When did he get so old again?!
The only thing that I regret about switching him over is that he can climb out of the toddler bed. Yes, he was able to climb out of the crib too, but he had to be really angry first. This is only a problem when at bedtime he won't calm down and lay down. I used to threaten to put him in his crib and he'd have to go to bed all by himself if he didn't calm down. We'd even gotten to the point where I'd give him a very stern look and just point at his crib and he'd know what I was warning him of. No longer. I attempted this one night and after putting him in the toddler bed only to have him climb out, he no longer fears the dire consequences of not going to bed when I tell him too. Now I threaten with timeout only they aren't nearly as effective. As evidenced by the two times this week that he was up until midnight. Yes, you read that right. Midnight.
Wish me luck this week. Hopefully one day the bed will be for more than just the point of him having a bed. You know he'll actually sleep in it or something.

I am currently getting ready to switch over my 4th child from the crib. She is only a month older than your little one! Rest assured, it does get better!

LOL What a fun story. What's so cute is that my threat is just the opposite. I say "if you don't lie down and get to sleep I'm going to drag you into MY BED and hold you down!" Now sometimes, my 4 year old likes that idea, thinking it's an adventure since he's never slept in our bed except for random weekend naps. In that case, I threaten to sleep in HIS bed with him. At that point he thinks it'd be fun to lie with me so we could cuddle. I guess my point is it's a lose lose. LOL I wish you luck! The toddler bed transition was a bit teary eyed for me. :) I'm stopping over from SITS roll call. Happy Tuesday!

I just moved my 2 1/2 year old from his toddler bed to a full size bed and he loves it! Stopping by from sits

This is so cute! Stopping by from SITS to leave some hump day love!

ohhh... I remember how my lil brother always wanna stay in my mom's room while he has his own. Great times!

Dropping by from SITS!