We visited a park near us last week. A park that just so happens to have a river. The river isn't visible from the play structure, nor could I hear it, and no I'd never taken Preston to this park before either. Yet somehow, moments after we'd arrived Preston had found a rock and grabbed my hand. All the while yelling, "water, water". I was dumbfounded. How did Preston know that this park had water? Even more so how did he know which direction to pull me in to get me to the water?
After attempting to distract him, I finally gave in and took him to see the water. In reality it was more of me attempting to distract him and him finally getting sick of it and heading toward the water on his own, leaving me no other option but to follow him.
When we reached the river Preston could barely contain his excitement. He wanted to touch it, play in it, throw his rock in it. He was allowed to do just one of those things, which seemed to suit him just fine as long as we stayed within sight of the water. How on Earth he became such a water child, I have no idea. 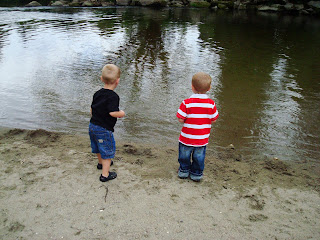 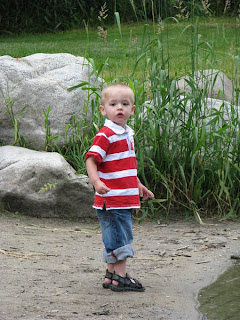 I also recently realized that our mall has a train ride in the basement. You know what that meant for my little train lover. We had to make a visit downstairs on a recent shopping trip. I say had to becuase I bribed Preston with a train ride for almost an hours worth of shopping time with him sitting quietly in the stroller. Until he started to believe that there might not actually be a train ride since I wasn't showing him the goods. Of course I had to prove that my future bribes would in fact be worthwhile. 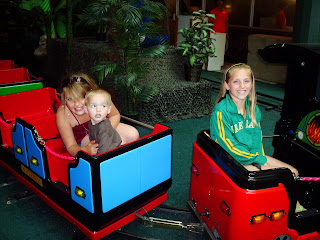 Too cute! What is it with 2 year old boys and trains. My twins LOVE them and water to for that matter. He is adorable!

cute! my 3 year old is train-obsessed.