The Sun Came To Visit

Last week the sun popped out to play for a few days. We were overjoyed. And that is the understatement of our feelings about seeing the sun.

Off to the park we went to play. Do not be fooled though. Just because the sun stopped by for a visit doesn't mean it was warm enough to leave our sweaters in the car. But I'm hoping that one day, we'll be able to do just that. Here's to hoping for warmth!

Preston loved the park. Which was no surprise. He is always in a good mood if we play outside. Plus there were slides. I know I've mentioned his love of slides before. 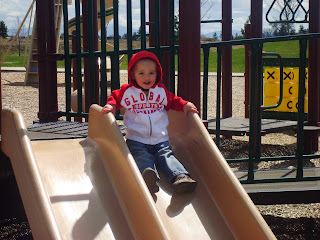 Preston's buddy Zack and his Mommy, Kelly, joined us at the park too. Where Preston and Zack had all sorts of fun with the side by side slides. Zack taught Preston how to climb up the slide. What's a boy to do without an older friend to teach him the ropes of the playground? The two boys also showed just how good of buddies they are by holding hands while they went down the slide together. 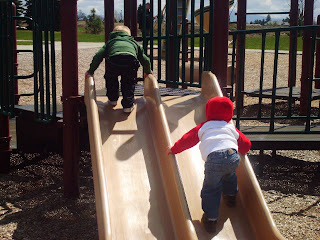 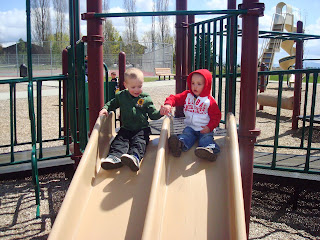 Preston also braved the huge slide while we were at the park. I have a total of zero pictures of that because I was scrambling up behind him to make sure that he didn't fall. I'm not sure what prompts a little boy his size to attempt a slide that size. I kid you not when I say that this slide was huge.

The sun did come out later and bring enough heat that we were able to take off our sweaters and enjoy ourselves. Preston even had a Drumstick to celebrate the warm weather. Actually it was my Drumstick, but as soon as Preston saw it he had to have it. Good thing my parents had more than enough to go around because neither Preston or me were willing to share with the other. 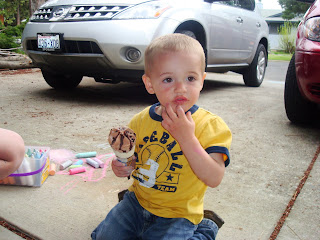 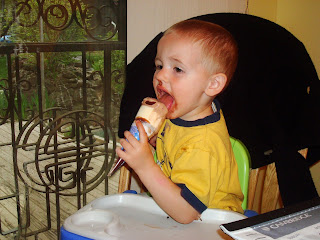 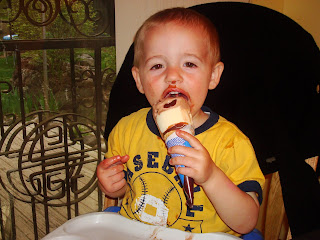 He sure makes that Drumstick look good doesn't he? Now if only I had some here.

I'm sure there are lots of naughty things Zack can teach Preston. Just give him some time! :D I think I have a picture of all three of you on the big slide. I'll have to send it to you.

Life is so much better when we can get outside.

It's been raining here (DC area) nonstop lately. I can't wait to see the sun.