I don't know where the time goes. Everytime I turn around Preston's different. He keeps growing. His vocabulary is changing. Even his mannerisms are new.

Preston now recognizes places and objects. Not just toys. Oh no. It's much more than that. When we leave a store and enter the parking lot looking for our car, he knows which one is ours. As soon as he spots it he gets all sorts of excited and starts yelling "car, car". Go ahead be amazed. I am.

The other day, we had plans to go play at Chuck E Cheese with friends. I grabbed our cup of tokens and set it next to my camera at the top of the stairs. Preston saw and started saying "cheese, cheese". I thought he wanted to take a picture until he grabbed the cup of tokens. It dawned on me that maybe he knew what Chuck E Cheese was, but I decided that couldn't be what was going on. Until we pulled into the parking lot and he points at the building screaming, "cheese, cheese!".

Speaking of Chuck E Cheese, Preston now also knows how to play the games by himself and even that he needs tokens to play the games. To my amazement he has also figured out how to put the tokens in to start some of his favorite games by himself. He grabbed a token from me and ran over to the skeetball to play. A minute later I followed him and he was already playing. Speaking of playing, Preston now likes the big boy toys too. Which is both good and bad. Good because it means he can keep me company, bad because it means he wants to play instead of watching me play. 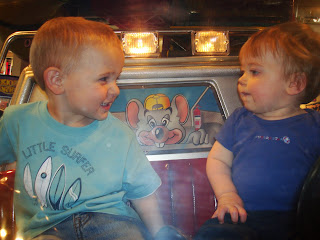 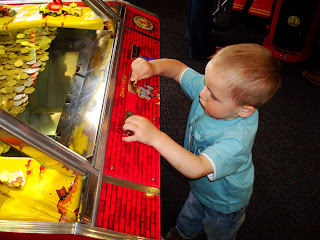 Recently too Prseton has become obsessed with his penis. Oh he had a regular interest that boys show in that part before, but WOW now he is full blown interested. He knows where it is. Can now say "penis". Actually lays down for me when I change his diaper now. Anything to be able to get his hands on his penis. Not such a good thing when his diaper is poopy. But we're working on that. Not to mention the difficulty level of trying to convince him to let go of his penis and let me cover it back up with a clean diaper. I may or may not have said, "We have to cover your penis so it doesn't get...dirty?!" a few times this week. It worked, heaven forbid Preston let his penis get dirty. Do you love how many times I said the word penis in that paragraph?

In the bath yesterday, Preston stood up and peed. While peeing he noticed. Because Preston is incredibly fascinated with water, he thought this was pretty cool. Instantly he's pointing and informing me, "water, water". Once he's done he sits down in the bath only to stand back up and point at his penis and tell me, "more, more, more". You try explaining to your one year old that you can't get him more pee. I gave it a go, but I'm pretty sure Preston just got bored of listening to me fumble for words and went back to his bath toys.

He can now cook his own dinner...almost. He demands some mac and cheese, goes into the pantry and waits for me to grab the box for him. Box in hand, he heads for the cupboard with the pots and pans. Then he needs a chair so that he can help. It's cute. Until he tries to touch the pan and it is very hot. He's learning though.

We've even changed bedtime. Now instead of rocking him and laying him down in his crib, I lay him down in my bed. Then I lay down next to him until he goes to sleep. Some nights it takes longer than others. A couple of those nights he's gone to sleep all by himself because I've gotten tired of laying with him while he puts of going to sleep. So far it's working for us.

I'm sure there's more; but I'm tired, Grey's is on, and Max will not get off my lap and stop kneading his claws into my neck. Speaking of Grey's is anyone else watching?

Oh my goodness, it sounds like you are describing my boys! The whole penis fetish... I hope it dies out! For both our sakes! My 2 year old HAS to wear zip up jammies or he finds a way to get his diaper off in bed at night. I worry about infection, you know!

Peeing in the tub is always a favorite of my boys too. You know they never really grow up either -- I can so see my husband thinking that was cool too... hahha