Since the weather decided to play nice for the day, Preston and me decided to take advantage. Okay actually Preston made this decision. I was just going to walk to the mailbox and retrieve the mail, but Preston insisted we keep going until we arrived at the school to play.

From the school he followed a group of boys over to the park. Preston has really started to become interested in the bigger boys lately. It was so cute to watch him. Since my brother is older Preston sees no reason that he can't just head over to play with boys that are much bigger than he is. After all Uncle Matt plays with him.

Once we arrived at the park Preston's attention loving side came out. This little Grandma was playing with her grandson when we got there. Preston paid no attention to them at first. Until the Grandma clapped for Preston when he went down the slide. Preston instantly went on alert. From then on everytime that Preston went down the slide, he expected her to clap for him. Even if he had to walk around me to face her and wait for her to clap for him. It was hilarious. She didn't seem to mind thankfully. 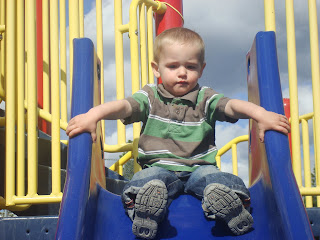 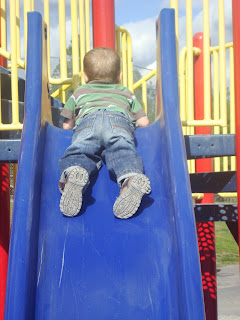 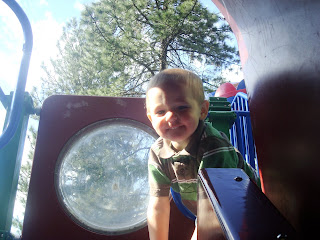 Preston also got a sliver early last week and has spent the week going around showing everyone his owie. Mind you the owie is gone now. After a day of letting it sit, I pushed that damn sliver right out. Preston was less than thrilled, but it was starting to swell and create some puss. Just gross. Now he's recovering but he still remember that he was hurt. What can I say he's all about the sympathy. Sympathy is in fact another form of attention.

After our nice long walk, Preston was ready for a snack. A very healthy one in the form of chips and dip. Yes, that is Preston's very own mini dip container. Mommy got tired of sharing hers. Mostly though I just got grossed out because Preston leaves pieces of chips behind and sometimes scoops the dip out with his fingers. YUCK! 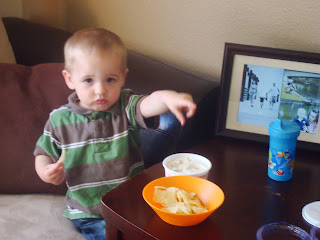 It's gettin nice here but humid! Looks like someone had a great time outside!