Preston has a new favorite games these days. Hide and Seek. 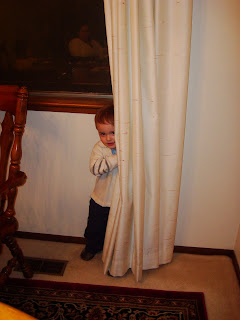 He prefers to hide in our closet behind a couple of my longer sweaters and jackets. But he's not super particular. He'll hide just about anywhere. He believes that if he can't see me, I can't see him. This could be because I play along that if I can't see his face, then the rest of him has disappeared as well.

I grab the lotion after a bath and he takes off running as fast as his little legs will carry him to our closet to hide from the lotion. The same happens if he sees me grab a diaper. He heads straight to the closet to hide from his diaper change. Which I really don't understand, I would think he'd be grateful that I'm changing him out of his dirty diaper but clearly that is not the case.

This becomes a race between the two of us. If I don't catch Preston before he gets to his hiding place in the closet or elsewhere, then he wins. I say this because if he's hiding and I can't see him than how can I put the lotion on, change his diaper, etc. Yes, you read correctly. I fully play along. I figure that it's a fun gamefor him, and I enjoy it too. Not to mention that it really helps boost his imagination. And so far no matter how frustrated I become with him hiding from me and how much longer it takes to get ready and out of the house because he now hides from me, it's worth it to see his smile when he pops out with a big smile that says "Here I am!".

SO cute!! :) I remember my nephew when he got into a jar of vaseline. I never thought it would ever wash off!

Hi Kim! Just wanted to pop by and say congrats on winning the montage on April Showers! I have a little guy just a few months younger than yours. I'm sure we will be chatting soon about your movie!