I used to think that I woulndn't have to worry about Preston with strangers. Or almost strangers. He sticks to me like glue when we get around too many people. Even more so if any of those people seem interested in him.
He sure proved me wrong. We attended one of my little sister Marrissa's basketball games, where my cousin Colten happened to be a referee. Preston hadn't seen Colten since Christmas Eve, three and a half months ago. That's quite a while for a little boy who is only 20 months old.
For the record Preston sat on my lap absolutely riveted during the first period that Marrissa played. He couldn't keep his eyes off the ball. By the time the last period began, he was restless. He wanted that ball. And he wanted it now.
Back to the point. How did I drift away from the actual story so quickly?
The game ended and Colten came over to say hello. Colten loves kids. Really loves them. He is the best big brother and cousin ever. Preston reacted just the way I expected him too. He clung to me and refused to even look at Colten.
Until Colten said the magic words. "Preston, want to see the ball?". And like a flash Preston was off of my lap and into Colten's arms. Six little words and Preston took off.
It was cute to see. Colten took him out to center court. Then over to the basket. Preston got to take a few shots as Colten lifted him up above his already 6 ft and taller head. Preston was thrilled. 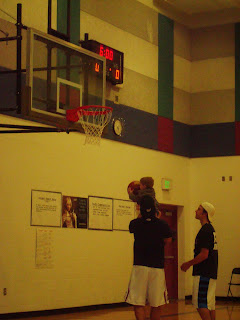 I was too. Once I got over the shock that something as simple as a ball had my son more than willing to take off with anyone. Granted that anyone was Colten this time. But what about next time? 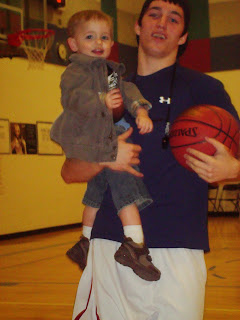 I forgot all about my worries as Colten brought my ecstatic son back to my lap just in time for the start of the next game. But now I'm thinking that I'll really have to stress that you stay away from strangers as he gets older. And yes that includes strangers that have a ball.