After the Seattle Aquarium, we made a quick stop at our hotel room then headed out again. this time to the Pacific Science Center. We met up with Brad's sister, Jen, who we hadn't seen in over a year. I'm sure she was surprised by how big Preston has gotten in that year. I think the last time she saw him he wasn't even crawling. Now he's such a big boy!
We started with the dinosaurs. Preston wasn't as interested in those as he is in his little ones at home. Brad was fascinated though. He kept asking me if I knew that was how big that one got. Or can you believe that is the actual size of this one. 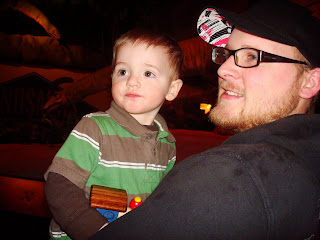 I was thinking that I regreted that we didn't bring the stroller in, we'd just walked in and already everything was starting to feel a little heavy. Anyone else started noticing that as your child gets older you still bring the stroller just to hold all your crap? 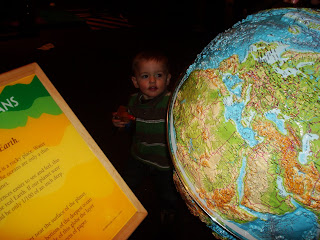 And back to your regularly scheduled posting.
From there we moved onto the toddler play area. Big mistake. There was a water table. Which was actually more of a water river than just a table. Preston loved it. I know that I've mentioned his love of water before. This was his heaven on earth. He stayed entertained here for quite a while. He was even unphased when the naughty older boy rudely stole the water bucket that he was playing with right out of his hands. I, however, was not so unphased by the whole incident. Especially since said rude older boy's mother was right there watching the whole thing and didn't even attempt to step in and correct her child's behavior. Insert me, rudely politely taking it back here. Some people's kids. Or better yet, some kid's parents. Sheesh. 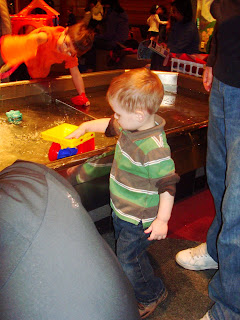 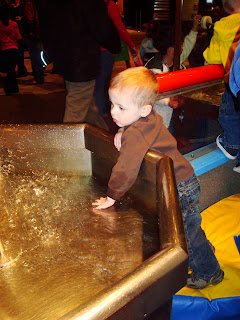 When we finally dragged Preston away from the water toys and into the actual toddler toy area to play, I made an observation. The once warmly dressed outfit that he'd been wearing when we arrived was now soaked from his adventures splashing in the water. It definitely didn't help that he has excema and was instantly scratching away at his poor little wet arms under his soaked long sleeve thermal shirt. A few trips down the slide and we moved on to find something for him to wear before he froze to death or itched himself to death, whichever came first. 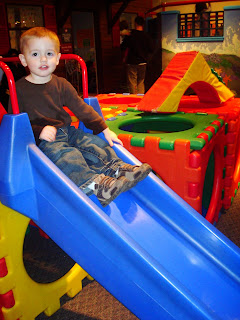 One stop at the gift shop later, Preston was the proud owner of a t-shirt that I never would have ever bought him at any other point in his life. Especially if I'd had to pay the $14.95 I paid for this one. Unfortunately we were out of options and it was this or a cute little girl's shirt. I feel that I ended up with the lesser of the two evils in this department.
Preston then spent the next hour or so getting out all of the pent up energy that he'd somehow built up. Possibly from the trip over the night before. Either way he was one little ball of energy and I spent that time just trying to keep up with him and keep his ugly red shirt in my line of vision.
At least until he started to get tired. Then he was all about adding to the weight of the things that I was already carrying. Where was that damn stroller?!
When he was getting close to melting down from sheer exhaustion, we decided to take him into the butterfly room and see if that would cheer him up. 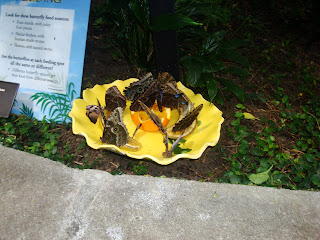 Boy did it ever. 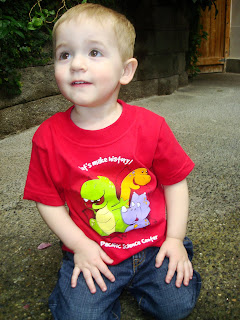 Preston was completely and utterly mesmerized by all of the butterflies and plants everywhere. I'm sure it didn't hurt that it was a nice eighty-five degrees in the butterfly room, where we've been hitting the forties back at home. The meltdowns were put on hold while he checked everything out.
I, on the other hand, was ready to have a meltdown. I am a real weirdo about any and all bugs/creatures. That includes butterflies. I was terrified one was going to land on me. Funny story, at Marine World in California we went into the butterfly room and one did. I flipped out. Started dancing around trying to get it off me without actually having to touch it. Here all these people are who want the butterflies to land on them and it chooses me. I even had a lady walk up to me and chatise me for not finding the joy that comes with having a butterfly want to land on me. She was real upset about that butterfly choosing me over her. To each their own, lady.
Luckily Preston doesn't seem to feel the same way that I do about butterflies. 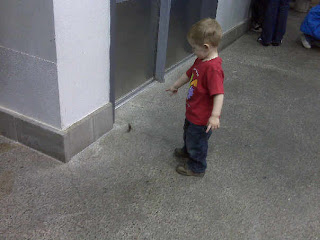 You can imagine the amazement Preston felt when one of the butterflies decided to land on Aunt Jen's hand. Preston couldn't believe it. I was relieved that it wasn't me. Check out Jen's face in the pictures as she goes from not being so sure about the butterfly touching her to thinking it's pretty cool. Preston's face does the exact same thing. It's like at first he can't believe that it's on her hand and then he realizes that it means that he gets to get up close and personal with the butterfly. 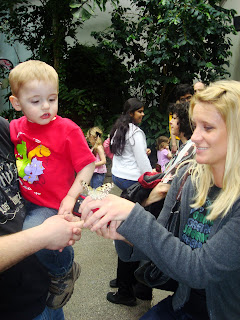 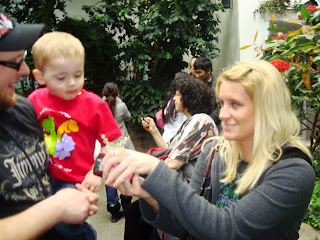 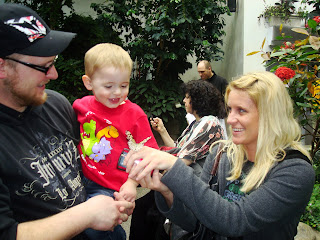 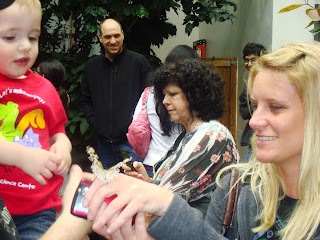 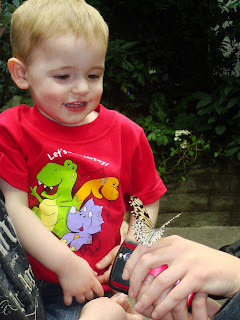 Preston then discovered a toy with little balls after we left the butterfly room. Go figure that my ball obsessed son found a toy that let him throw the balls. 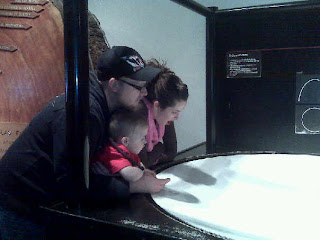 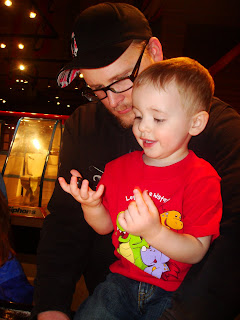 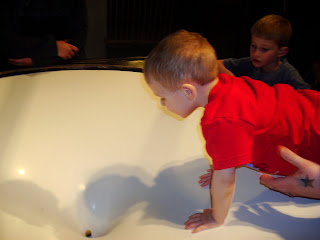 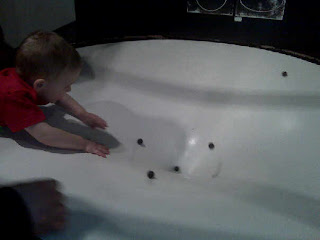 And finally we stepped out into the rain to check out all of the water features. Once again Preston was in his element. I don't know what his fascintion with water is, but he just becomes spellbound. I had to drag him away when I couldn't stand the cold anymore. 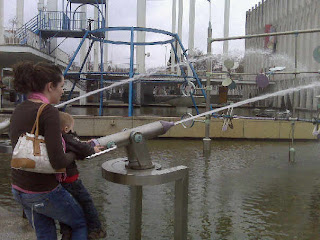 And thus ends our day. We were all exhausted. It was so nice to head back to the hotel for the night.

I live in the Seattle area... and I've been to the Pacific Science Center. It's pretty neat. I took in an IMAX film there once and it was AWESOME! Did you get to see that giant octopus at the aquarium? Were the sea otters still floating on their backs?

My girls were TERRIFIED of the butterfly room AND of the dinosaurs. It was such a waste of money for us!! What a couple of pansies I have. ;)